up to a thousand people took part this evening in a rally and march and film re-enactment. after gathering at trafalgar square, several hundred people marched down whitehall, many wearing iconic 'anon' masks, and gathered at the gates of parliament, taking over the road and closing it to traffic for several hours this evening. as numbers dwindled towards midnight, it seemed unlikely that westminster would erupt in flames shortly after midnight as it did in the film 'v for vendetta'. 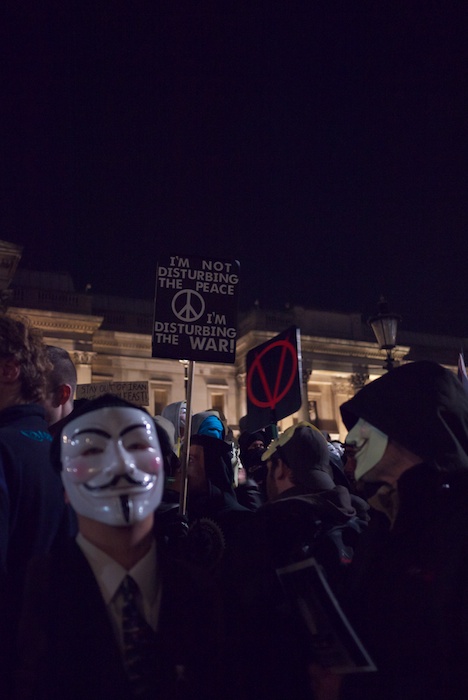 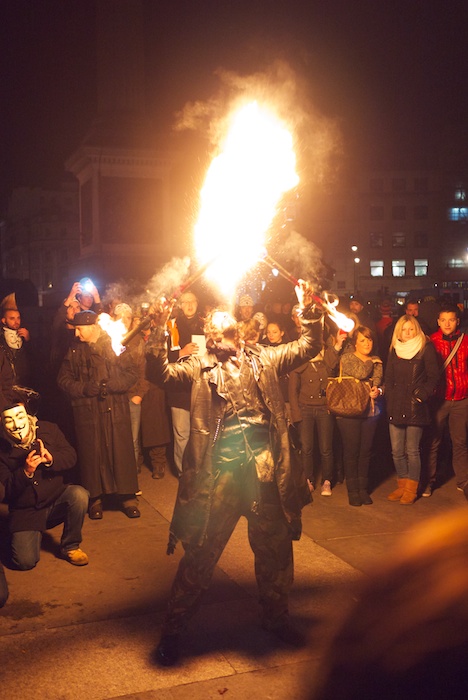 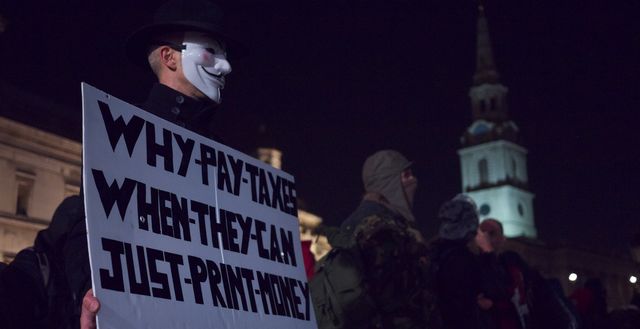 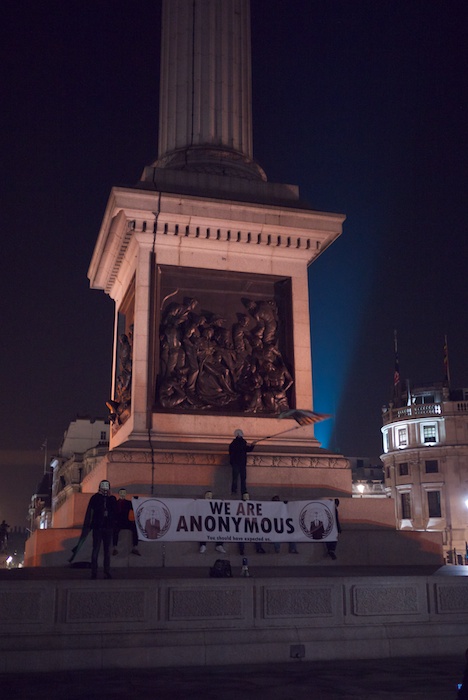 at the gates of parliament 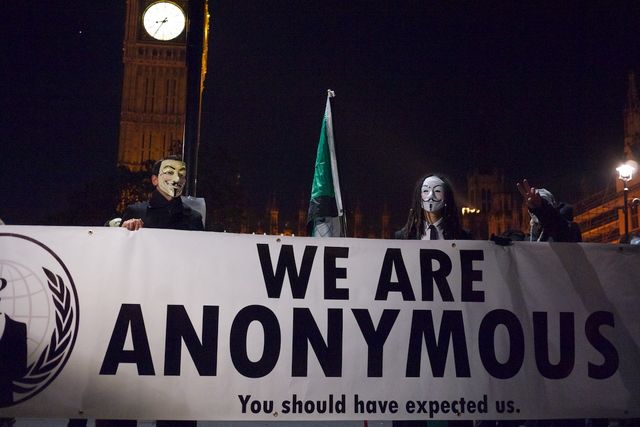 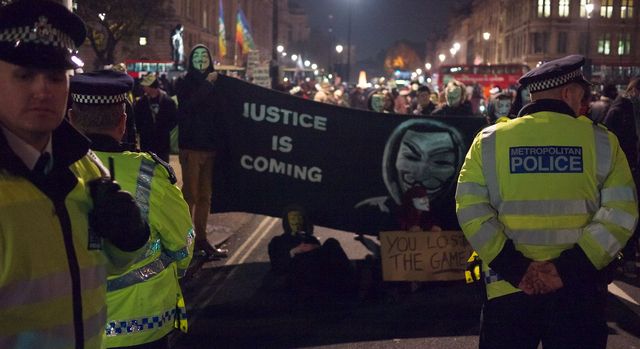 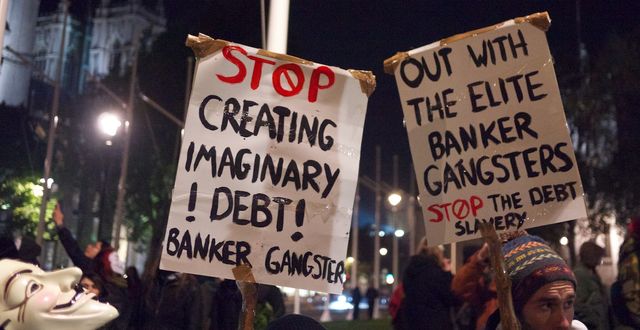 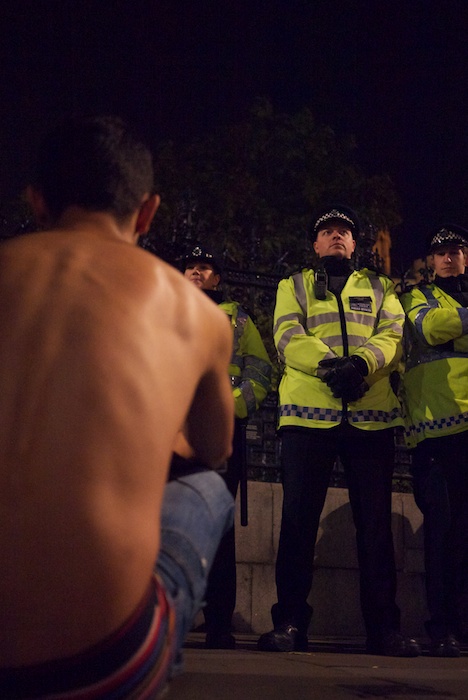 at 6pm, the steps of trafalgar square were full of masked anons, and numbers built up to spill into the square. police and "heritage wardens" watched as various square bye-laws were transgressed, with some commercial photography, lots of banners and protest, some singing, music and games, and even some fire-eating and juggling (all things prohibited by the bizarrely draconian rules covering this "private" public space).

at around 7.30, anons climbed the ledges around the base of nelson's column, and this then became the focus for the crowd, which at its peak might have numbered close to a thousand.

around 8pm, the group set off towards parliament, taking over whitehall to the familiar chants of "whose streets, our streets". along the way, they paused to allow a giant 'anonymous' banner and some disabled people to lead the protest into the square.

police formed a line, forcing people to pass around them. their idea seemed to be to prevent traffic disruption to certain routes, but it looked as though they had accepted that the main road in front of parliament would be closed and traffic was obviously being managed to facilitate this.

there was also a line of police along the fences and gates of parliament, and the crowd surged right up to them, with some people attempting to attach the anon banners to the fences.

there were some scuffles over by the abbey between masked protestors and a FIT team. this led to a sit-down at that corner, which resulted in traffic being turned back along the embankment and then managed again to avoid the square.

as two politicians were accompanied out of parliament, police surged forward to clear the pavement in front of parliament and there were some minor confrontations during that process.

there was also some scuffling and, i think, one arrest, when a small group of people tried to scale the fences.

otherwise, the proceedings remained cheerful, peaceful, and reasonably unhindered. however, my feeling was that the protest was being "facilitated" or tolerated, but the police had huge re-inforcements nearby, two helicopters above, and manifestly visible and audible attack dogs within the grounds of westminster, so were in complete control at all times.

numbers started to dwindle after 9pm, and it's been reported that legal observers left around 11pm as less than a hundred people remained outside parliament.

It was alot more than a thousand 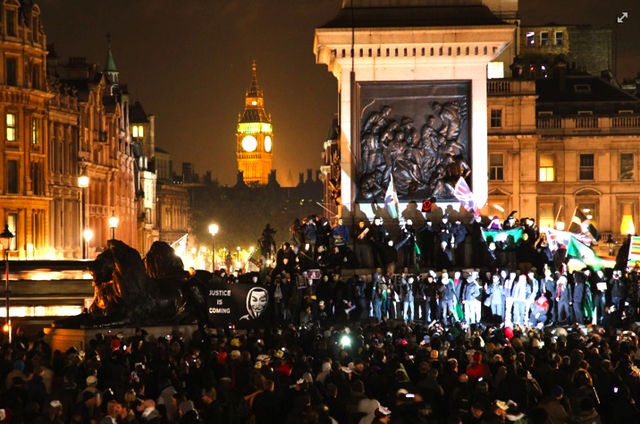 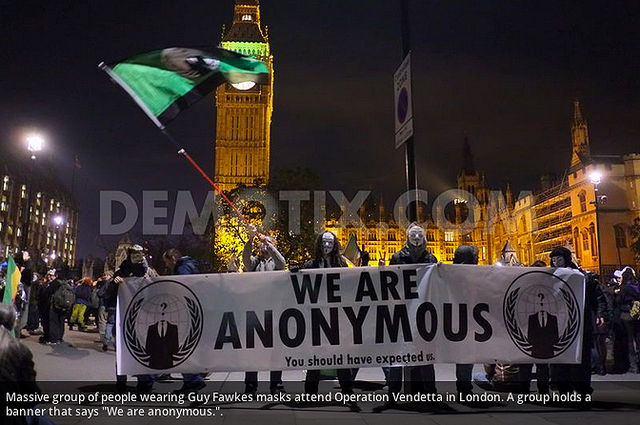 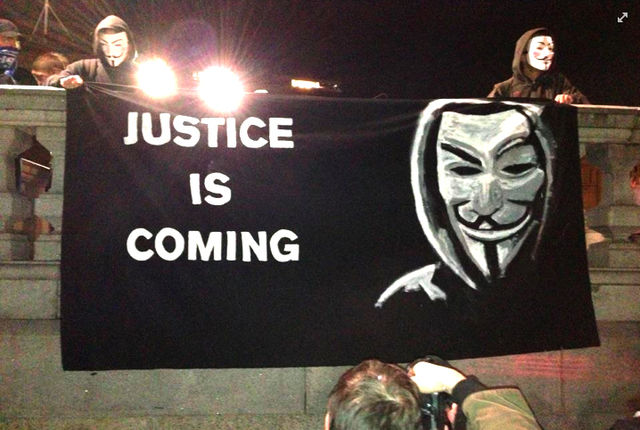 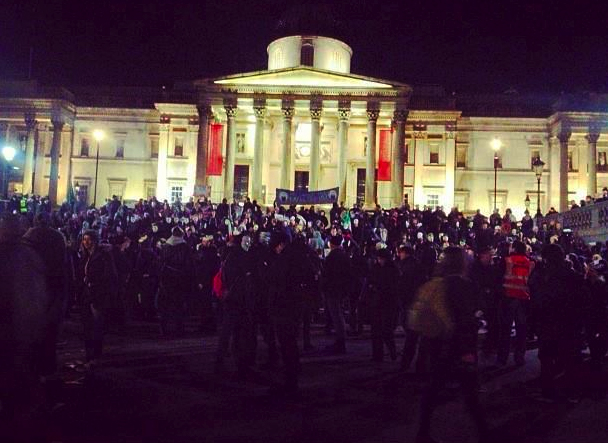 Well done to everyone who showed up 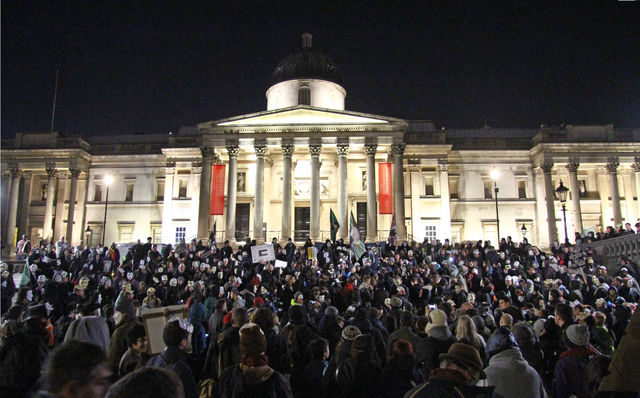 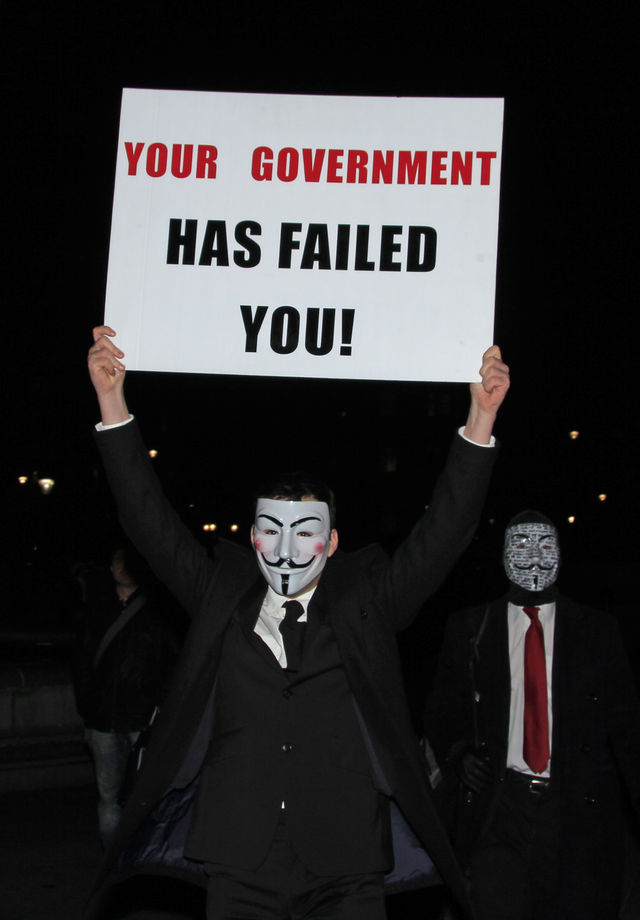 The cops finish their shift and post-up stupid comments on Indymedia, unfortunately we're used to this routine, but just in case anyone's taken-in by their trolling, anyone can point out that any and all actions (no matter how successful they are) could always be better - the response is that by the same logic anything could have been worse. If readers fall for their arguments and therefore do what the trolls hope you'll do, which is to stay at home, then things will definitely be worse. What the Tories want is for everyone to stay at home and do nothing while they steal billions in public resources, unopposed, so if only one person had the minerals to show up for a protest at least that one person could prove they didn't take it laying down.

The thieves and collaborators will single mindedly pursue their political and financial objectives for decades, and we need to keep up the resistance for decades

At 8pm on November 5th 2012, Anonymous will march on The Houses of Parliament peacefully and unarmed. This is the centrepiece of a worldwide Anonymous operation of global strength and solidarity, a warning to all governments worldwide that if they keep trying to censor, cut, imprison, or silence the free world or the free internet they will not be our governments for much longer.Change is coming

The Demands of the UK collective:

Stop the education, health and welfare cuts; Cut the causes of the problems, don't cause more. 'Austerity measures' targeting vulnerable areas of the economy and society must be stopped. Bank support and bailouts using the taxpayers money must end.

Recognise the internet as an independent, self-governing, self-managing entity; An entity that is not, and will never be, controlled. The rights of internet users to protect their privacy must be respected. Web monitoring programs including, but not limited to, the Communications Data Bill CM 8359 should be withdrawn and no more should be proposed. 71% of UK Citizens are against the Bill, and its £1.8bn cost could be better spent. Suppression of free speech and censorship of the Internet must never be allowed.

FREE ANONS; Activists held as political prisoners must be released, including Richard O'Dwyer, Julian Assange, PayPal 14, Jeremy Hammond, Topiary and the 4 anons of the UK that will stand trial on November 7th. They must be pardoned and their full civil liberties restored. Whistleblowers should be protected, not punished.

Defend the right to protest. Distributed Denial of Service must be recognised as a legitimate form of protest, as long as an aim and reason has been specified by the protestors. Recently, we have seen the privatisation of every aspect of Government and placing companies that put profit before justice into positions of power is immoral and unethical. All corporations are quickly moving on to private land or government safe zones - this is an attack on freedom of speech and we will not consent to designated protest zones.

Search for us, and you will find us.