Counter-demonstration against Zionists using memory of Holocaust to condemn Iran

On May 1st, Zionist groups held a vigil in front of the Iranian Mission to the United Nations in New York City to use the memory of the Holocaust to condemn Iran. Anti-Zionist Orthodox Jews showed their opposition to this provocation by demonstrating on the opposite side of the avenue. 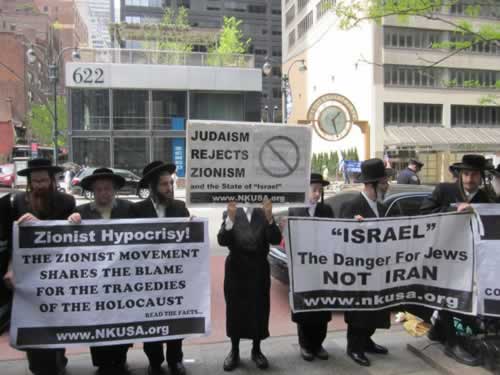 The message of Anti-Zionist Orthodox Jewry: “Don’t Use the Holocaust to Justify Zionism”


On Sunday, May 1st at 12:00 P.M. in front of the Iranian Mission to the United Nations on Third Avenue and 40th Street (622 Third Ave.), Zionist groups will hold a vigil to use the memory of the Holocaust to condemn Iran. Anti-Zionist Orthodox Jews will show their opposition to this provocation by demonstrating on the opposite side of the avenue.

The Zionist ideology and the Zionist state are forbidden by the Torah. According to Jewish belief Jews are in a Divinely decreed exile and are forbidden to: a) go up amass to the Holy Land, b) rebel against any nation, c) make any attempt to end exile. Jews are required to wait patiently for a Divine redemption by the Almighty Himself, without any human intervention. Therefore World Jewry and it’s leaders where always opposed to the philosophy of Zionism and to the creation of the State of “Israel”.

The horrible facts of the Holocaust do not change the position of the Torah. Zionism and the State of Israel remain forbidden. - Also we agree with the well-known statement by the Iranian president that the Palestinians should not have to pay the price for the Holocaust.

What has been done over the last few decades in Palestine by Zionism and the State of Israel has been done falsely in our name, the name of Judaism and in the name of the Holy Torah. The Zionist State and its actions is still strictly forbidden by the Torah, and is condemned by countless Jews around the world.

Jews are in exile, and must act humbly. To provoke the nations of the world is forbidden by the Torah. The Zionists have been provoking the Arab world from the very beginning of their movement. In the course of their history, they have provoked many other nations, and now they are provoking Iran.

The Zionist approach has never brought any benefit to anyone — even the Jewish people, whom they claim to protect. On the contrary, they have disturbed the longstanding peace we have always enjoyed with the Arab world.

The Zionists give the Holocaust high publicity today, because it helps them win sympathy and support. But we must remember that they also share in the guilt for what happened to the six million European Jews. Many books have been written to document the fact that Zionists collaborated with the Nazis to further their own national and personal interests, as well as ignored crucial opportunities to save Jews and at other times, callously incited and fanned the flame and furor of the Nazi leaders. These titles include Holocaust Victims Accuse by Moshe Schonfeld, 51 Documents by Lenny Brenner, Perfidy by Ben Hecht, The Unheeded Cry by Rabbi Michael Weissmandl and The Seventh Million by Tom Segev.

We find it ironic that those who were so implicated in this genocide while it was happening, talk about and use it incessantly afterwoods as an accuse to justify all their actions.

We pray for the speedy and peaceful dismantlement of the entire State of “Israel”, a time when Jews and Arabs will once again live in brotherhood and peace. May we ultimately merit to see, soon in our days, the revelation of the glory of the Almighty, when all humanity will serve Him in joyous harmony. Amen.


"Don't use the Holocaust to justify Zionism"