[an error occurred while processing this directive]

Mozaz, aka Mark Wallis, was angry, unpredictable, stubborn and inconsistent. 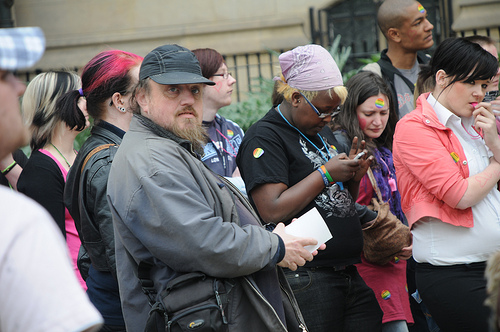 But he was also passionate. And way more sensitive than many people gave him credit for. He was supportive, when he liked you, though whether he liked you or not could change at a moment's notice. But when he was on your side, he would back you up every step of the way, whatever the kind of support you needed was. Emotional support, practical support, and advice. He offered, and he meant it.

Mozaz was a great photographer who, like me, didn't see any contradiction in finding beauty as much in abandoned, derelict buildings as in the rolling countryside. And he found much beauty in both. He adored Sheffield and was certainly one of its characters.

And Sheffield, despite itself, will miss him.

As an anarchist, and a troublemaker, and with strong feelings about almost everything, he was often to be found at demonstrations and protests. As a person he found solace in hugging trees, he wasn't ashamed to admit he cried.

The last time I saw him he was proud to have spent the past few hours in a police station. He felt proud that he was considered to be enough of a threat to the state to be worth arresting. Before being released without charge he had made sure to inform all of the coppers of their union rights, urging them to seek advice about whether they should be enforcing fascist government policy. He was exhausting to be with. Everything had the potential to make him rant, often in unexpected ways. But there was an anarchist rave hidden behind every possible situation which could arise, and he never failed to provide it. He was a prolific blogger and was @ur32daurt on twitter.

Mozaz was hard work, but if you looked beyond what was immediately visible he was sensitive, supportive, intense and warm-hearted.

He died in the early hours of this morning after a time in Intensive Care with pneumonia. Through the last few days, since becoming aware of his being ill, I kept hold of the fact that he was surely indestructible. But sadly this proved not to be the case, and he has left this city a little quieter, he has left the police force with a little less work to do, and he has left many people, myself included, reeling.

I'm going to miss you Mozaz, you mad bugger.

We finally have a date and time for Mozaz's funeral.


The 'service' will be at Grenoside Crematorium in the North Chapel starting at 12pm and finishing at 1:15pm


The 'service' will then be followed by a gathering of friends from 1:30pm onwards at :


Friends are welcome at either or both venues.

The cortege will leave from outside George Barsnleys at a time yet to be arranged. ( I will post as soon as I know) It will then pass The Fat Cat and pause for a short while. We will then carry on to collect his mother and proceed to the crematoruim.

We will require coffin bearers but the number is limited, usually to 6. If you wish to do this will you email me so we can make arrangements. Also, if anyone wishes to stand up and say something it would be helpful for me to know for numbers etc. There will be a slideshow of pictures of Mozaz halfway through the 'service' so if you have any you'd like including, please let me know.

Any other questions, please just ask.

[an error occurred while processing this directive]