On Tuesday 30th November, as part of the nationwide "Day X2" protests, around 200-300 university workers, students and locals took on the 45 minute trek from the Sheffield University concourse to Nick Clegg’s (Sheffield Lib Dem MP and Deputy Prime Minister) constituency office in Fullwood. Despite the snow and heavy handed policing, which involved a ban "from going within 40 metres of Sheffield MP Nick Clegg's office", the protest returned to the University and proceeded to occupy the Richard Roberts building. The occupation has issued a set of demands and for the latest news visit the occupation web site.

Update 3/12/2010: With short notice Sheffield University have been granted an eviction injunction, but this has yet to be served.

There will be a demonstration against the cuts on Saturday 4th December, meet on the Sheffield University concourse at 12:00 and on Sunday 5th December, a Sheffield Against Cuts Public Rally, 16:00 in the Richard Roberts Auditorium.

A third national days of protests "Day X3", has been called for Thursday 9 December 2010, the date of the parliamentary vote on fee increases. The Sheffield reports from the first national day of action, can be found here: Sheffield University Occupied in Opposition to Education Cuts. 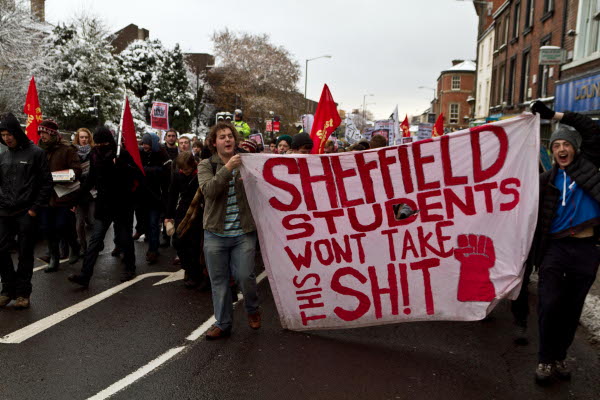