Students at University of Sheffield Occupation Threatened With Court Injunction

The University has applied for a court injunction to evict students from their peaceful occupation against higher fees and cuts in the Richard Roberts Building at the University of Sheffield. 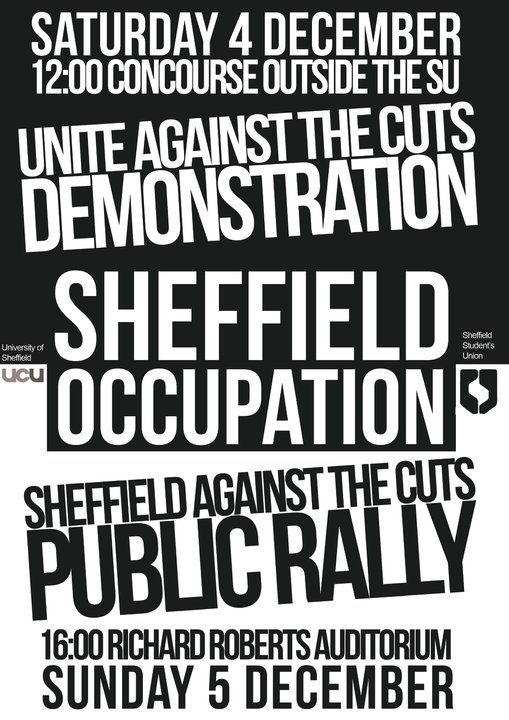 The occupation is still allowing all lectures to go ahead and also organising additional lectures. There is no disruption to students whatsoever and there is study rooms available for all students which wish to join in the protest.

The committee of the Sheffield University branch of UCU said, “Your action is a welcome practical expression of the fight against this Government's spurious, elitist and anti-social “education” policy… The cuts to education, the axing of the education maintenance allowance, the proposed trebling of tuition fees and now the proposed abolition of AimHigher should all be strongly opposed.”

We’re building for the events at the weekend now, which include a demonstration at 12 on Saturday, assembling on the concourse outside the SU, and a public rally on Sunday at 4 in the occupation where we will be joined by Trade Unionists from Sheffield.

University of Sheffield Attempts to Ban All Protests on Campus Indefinitely

The University of Sheffield is seeking a high court injunction to put an indefinite ban on all political protests on campus. The injunction was served at 13.30 on Friday 3rd December to the students occupying the Richards Roberts Building, giving them just two hours to attain legal representation and attend an appeal at the high court in London at 15.45. The University of Sheffield is in the city of deputy Prime Minister Nick Clegg who before the general election campaigned to ‘scrap bad laws’.

The main case for the injunction is the claim that students which have been occupying the Richard Roberts building since Tuesday in protest against higher tuition fees and education cuts have been disrupting education at the University. In fact, lectures and seminars have been going ahead without any disruption at all.

The occupiers believe that this is a fundamental challenge to the right to protest. They are currently seeking an adjournment to court proceedings in order to prepare a legal defence and attain proper legal representation. The protest, which has remained peaceful throughout, has had a wide level of support from various groups and individuals including Sheffield Student’s Union, Sheffield UCU, John McDonnell MP, Jeremy Corbyn MP, Ken Loach - film maker, Mary Anne Hobbs - former Radio 1 DJ, Sheffield NUJ, Sheffield Green Party, University of Sheffield Labour Students and Sheffield Right to Work Campaign.

The hearing in London went ahead. We had phone communication with the Judge in the courtroom, and were in constant contact with the proceedings. It was discovered that an injunction hearing had been held at 11am, and that the judge had passed the injunction - meaning that the University could potentially evict us. One occupier was remotely involved in the second hearing, in which the Judge granted a possession order. This allows the University to call on bailiffs to physically remove us. We have not been officially served, however this is not required in order for bailiffs to evict us. It is worth reinforcing that we have not been able to produce a legal defence due to the sudden nature of the court case, and management have not responded to our requests to talk.

Shockingly, the Judge was forced to amend the University injunction application, which had originally stated an indefinite ban on any protest action anywhere on campus that did not have explicit University permission. This attack on the freedom of political expression is in breach of the Human Right to Freedom of Speech and Freedom of Assembly, and is a disgraceful assault by the University on its students. The amendment limited the possession order to the specification of the occupation of the Richard Roberts building.

We have been seeking, with the help of the Student Union, talks with University management to discuss the situation. They have refused. We have been attempting to reach Aaron Porter for the legal, financial and political aid he promised to occupations, a form of protest he claims to support. He has been unreachable.

The occupation is still ongoing, and we will continue to build and facilitate meetings and events. Come along, your support is more important now than ever.