Students from schools, colleges and the universities demonstrated in the city centre on 24th of November in protest at the increase in tuition fees and education cuts. Following this students occupied the Hicks Building at Sheffield University. One of the occupying students explained the reason for this:

"We are occupying for a variety of reasons but generally around the common purpose of being against the cuts in this university, to other universities and to education in general. Particularly we want to demonstrate against the proposed rise in tuition fees and the ongoing privatisation of higher education. However, we are also tying our actions to a wider struggle against austerity measures and cuts."

The University evicted the occupation the following day.

On the same day there was a massive turn out for the launch of the Sheffield Anti-Cuts Campaign, listen to the speeches from the meeting. See also the recording of the Defending the state? Welfare cuts and the social wage meeting held in early November.

A second day of national protests has called for Tuesday 30th November 2010, assemble at Sheffield University students union campus on Western Bank at 12.00 noon to march to Nick Clegg’s office. 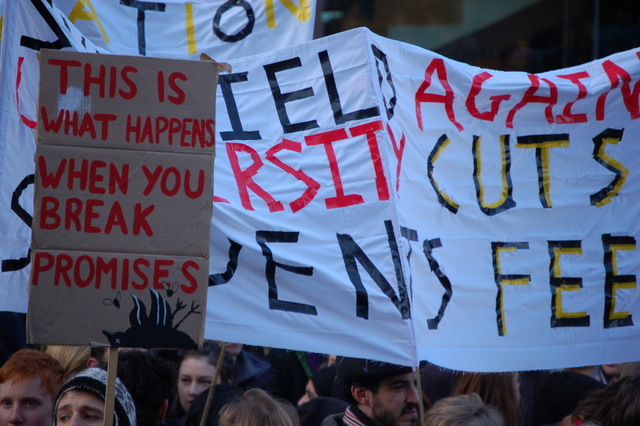 The Occupation and Tuesdays Plans 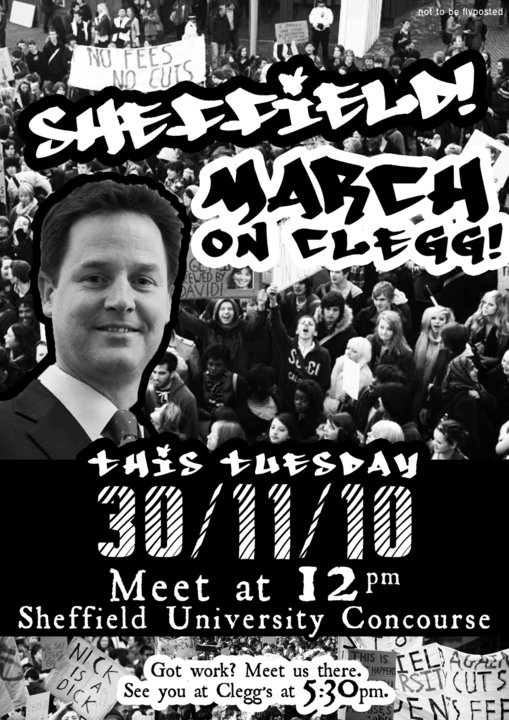 What a difference a day makes

After the rally on the concourse at 12 we managed to get a few more people into the occupation whilst the security were pushing and shoving us about. Then, coincidentally, the fire alarm went off. We were highly suspicious that the security set off the alarm to try to get us to leave. This is because of the timing - they were agressivly preventing people from entering the occupation. And it is also because we know that this is a tactic that is often used against occupations. For example, at City of Bristol College yesterday, 300 students occupied and shortly after the fire alarm was set off and the occupation had to be evacuated. The Security in the Hicks building immediately told us that the police had been called and that they would ‘evacuate’ the occupation. The claimed that ‘someone set the alarm off and did a runner out the back door’ - sounds convincing… Our group then decided to leave and we headed over to Firth Court. The security there agressively tried to prevent us from entering the building, despite the prescence of primary school children. We managed to get in however, and succeeded in occupying the corridor outside the vice-chancellor’s office. At this point, there was a large number of university security guards inside the building and a van load of police outside. We decided to leave and build for the next national day of action on Tuesday. All-in-all a very succesful 24-hour occupation. There was a great demonstration yesterday, a big, visible occupation and a sit-down outside the VC’s office. We all feel great about our protest and can’t wait to make tuesday even bigger and better! Thanks for all the support and we’ll keep you posted on what’s going on in the next weeks in our struggle against higher fees and cuts.

“We are again rallying at Sheffield University students union campus on Western Bank at 12.00 and from here we will march to Clegg’s office.

For workers coming after work meet us 5.30pm at Clegg’s!”

The Kids Are United – Against Cameron & Clegg!

Brigade members joined forces with Underclass Rising to offer our support to students in Sheffield today. First to turn up were thousands of 6th formers who are protesting against the loss of EMA. These youngsters were in fine voice and the anti-Tory songs took us straight back to the 80s – though I’m sure we never swore as much back then, honest ;-) Sadly we only had a few of AMP’s ‘Best Cut’ posters left to give out, which is a shame because they were very warmly received.We needn’t have worried though, the kids were on form with some brilliant banners. There were obscure ones – “Dis shit wouldn’t go down at hogwarts”, personal ones – a picture of Sam Cam which read “Not the only one being screwed by David!” and ‘to-the-point’ ones – a piece of paper that simply read ‘CUNTS’.

When the uni students turned up the protesters marched through the streets of Sheffield, down to the Town Hall. It was hard to gage how many people were involved, but West St was full from one end to the other with students. It was pretty obvious that the Yorkshire Post‘s estimate of 1000 was complete bollocks (as usual) – and the Posts ‘coverage’ is predictably negative. The support for the student’s cause is damn near universal in Sheffield and everybody was clapping as they passed. We doubt Sheffield has seen many protests like this since the days of CND or the Poll Tax.

Once at the Town Hall we attempted to get an aerial-photo from the upper floors of Barclays Bank – we were stopped on the stairs and asked what we were doing. When we told them, they said “We wouldn’t want to be associated with THEM!”, pointing at the students. There you have it, as if you didn’t know already – an official spokesman for Barclays wants nothing to do with people fighting for fairness, democracy and justice! FUCKING BANKERS!

There wasn’t much of a police presence at the Hall, but when we walked round the corner, to the Peace Garden, we found that vans and horses were lined up in force. Sadly the boys with billy-clubs would have been more than happy to vent their spleen on Sheffield’s wonderful children :-( C’mon lads, you really should have joined them on their demo instead of skulking in a corner like the school bully – after all, you’re gonna be victims of the cuts too!

This was one of the most inspirational protests we’ve seen in years. These kids can certainly teach the grown-ups a thing or to. If the adults are afraid to take to the streets because they might lose their jobs then they need to wake up and smell the coffee – cuz you’re definitely gonna lose them – and a whole lot more – if you don’t!

Police ban to keep student protest away from Clegg's office

Published Date: 30 November 2010
Protesting students are to be banned from going within 40 metres of Sheffield MP Nick Clegg's office today.
No more than 100 will be allowed to gather there at any one time even though around 1,200 are expected.

The march is in protest at plans to increase university tuition fees and leaves Sheffield University at noon.

But the plan of action drawn u
ADVERTISEMENT
p by police chiefs states that protestors will be stopped in their tracks 40 metres away from the Lib Dem Deputy Prime Minister's constituency office in Nether Green.

Officers have also been told that no more than 100 must be allowed to assemble there at any one time.

Chief Constable Med Hughes has signed an order under the Public Order Act 1986 that is aimed at allowing peaceful protests but minimising disruption to local people.

Superintendent Martin Scothern, leading the police operation in Sheffield, said: "The planned protest site does not lend itself to large-scale assembly and immediately adjacent to the constituency offices are business premises and a children's nursery.

"This gives grounds for fearing that the rights of those not involved in protest would be disproportionately affected if South Yorkshire Police allowed protest to go ahead, unconstrained by limitations as to the location or size of assembly.

"Having considered these points, the Chief Constable decided, on balance, he could not permit protest to take place without imposing reasonable conditions to ensure the safety of all involved.

"He therefore directed that protest should be restricted to the large public roadway approximately forty metres away from the constituency offices at the junction of Fulwood Road and Nethergreen Road, and only for a limited time, between 1pm and 3pm, to ensure the safety of the children in the nursery.

"The Chief Constable indicated that the assembly should be limited to no more than 100 people at any one time, again to ensure the safety of everyone involved, to protect the rights of those wishing to go about their normal business and not take part in protest.

"I want to echo the Chief Constable's hope that the organisers of the event recognise their responsibility regarding the safety and welfare of protestors given the present dangerous weather conditions, road conditions and the nature of the neighbourhoods and communities in which they wish to protest."