Obama, Guantánamo and the “War on Terror”

Former Guantánamo prisoners including Moazzam Begg and Chris Arendt, a former guard, are completing a UK speaking tour to “mark seven years of unlawful detention, abuse and torture”. The tour, organised by Cage Prisoners started in London on 11th January 2009, exactly seven years after the first transfers to the prison torture camp at Guantánamo Bay at date which was marked in London by a weekend of actions. Sami al-Haj, a former Guantánamo prisoner and Al Jazeera journalist was due to be one of the speakers but instead he joined a Free Gaza boat which was fired on and didn’t make it. By the Sheffield meeting, held on the date of Obama’s inauguration, he had been replaced by Omar Deghayes another former Guantánamo prisoner. In Liverpool the meeting “was held on the same day as the US president signed an order to close Guantanamo. Moazzam Begg was not impressed, and commented that Barack Obama spoke about ‘outlawing torture’ as though he himself had just decided to make it illegal: “It has ALWAYS been illegal, at least in any civilised country”" Further reports can be found on the tour blog. 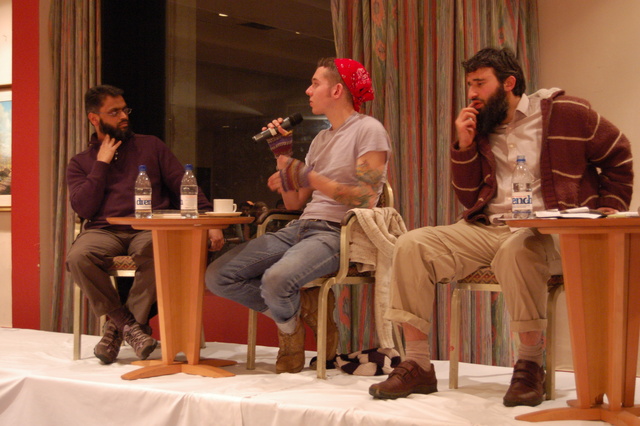 The tour blog had this to say about Obama Promises to Shut Gitmo & Secret Prisons:

Yesterday Obama announced that he would call an end to the military tribunals in Guantanamo, but today came even bigger news: he issued executive orders to shut down Guantanamo within the year AND shut down the CIA’s entire secret prisons program.

Chris, Moazzam and other detainees have often expressed skepticism that Obama would actually follow through on his campaign promises about Guantanamo, but today’s news was a big step in the right direction.

The two discuss the news as they drive through Liverpool, England, to the night’s speaking gig at a university in town.

“He’s mentioned Guantanamo twice now and the fact that he’s calling for its closure within a year is fantastic,” says Begg. He thinks on it for a few moments. “But a year is a long time if you’re a prisoner. If you were told now, ‘You’ll be free in a year after you’ve been here for seven years’ – how do you feel about that? It’s good in a sense because at least you know how long you’ve got left.”
“You’ve got some finite limit,” adds Chris.
“I wonder if the guys inside know though?” I asked.
“Oh I’m sure they’ll find out,” says Moazzam.
“All it takes is one guard that can’t keep his mouth shut and the whole camp’ll know,” affirms Chris.

Chris’s roots in rural Libertarian Michigan and six years in the National Guard have reared him an absolute cycnic when it comes to government, however. He still feels much the same way he did on Obama’s inauguration day, when he sounded off about the politician in the lobby of a Sheffield hotel.

“I know I sound like a pessimist. I know Obama comes from this cool background and I know just him being in office means a whole lot, but seriously it’s going to take actual actions until I believe he’s done anything worthwhile. Politicians talking, it’s nothing new.”

Closing Guantanamo is a step, says Chris, but he believes it may be the easiest step of many Obama will need to take to right the wrongs of the last seven years. Chris starts ticking off the things Obama needs to do before Chris will consider him successful. “Complete withdrawal from Iraq and Afghanistan, openly criticizing US detentions policy and issuing some kind of reparations or apology to those guys who were illegally detained, rebuilding our legal system so that things like this can’t happen again. This has proven the Supreme Court impotent, it’s proven Congress impotent, it’s pretty much given complete authority to the president and the president alone.”

And Nafeez Ahmed has written:

So what should we make of Obama’s opening measures, almost as soon as he was inaugurated as President, to close Guantanamo Bay, de-legitimize torture and challenge CIA practices of extraordinary rendition? Firstly, we should of course welcome any such public condemnations of these practices, particularly by the new American President. But this should not blind us from critically examining what Obama’s Executive Orders actually meant.

While around the world, Obama’s measures were interpreted as completely reversing the Bush administration policies of torture, extraordinary rendition and secret prisons – starting with the declaration of the complete closure of Guantanamo Bay – deeper inspection of the details of his Executive Orders suggests, unfortunately, that cries of joy are slightly premature.

First, it should be understood that regardless of what elected US governments have said or left unsaid about the practice of torture by military intelligence services, torture is, and always has been, endemic and officially sanctioned at the highest levels. Declassified CIA training manuals from the 1960s, 70s, 80s, and 90s, prove that the CIA has consistently practiced torture long before the Bush administration attempted to legitimize the practice publicly. This means that what made the Bush era distinctive was not the systematic practice of torture by US military intelligence agencies, but rather the US government’s open and widely known endorsement of such practices, and insistence either on their obvious legality, or otherwise of the irrelevance of law in the context of fighting terrorism.

This means that Obama’s public disavowals of torture do not actually represent the end of the systemic practice of the CIA’s traditional interrogation techniques, conducted without public scrutiny for decades. Rather, they portend a sheepish return to secrecy – or in other words, a return to the obvious recognition that open declarations of covert US practices such as torture as official policy are detrimental, not conducive, to US hegemony.

Closer scrutiny of President Obama’s first Executive Orders reveals that they were designed less to transform illegal US military intelligence practices, than to allow them to continue in secret without legal obstruction, by redefining their character (while retaining their substance):

1) While Obama demanded the harmonization of interrogations in line with a purportedly Geneva Conventions-compliant US Army Field Manual, unaddressed revisions to that manual in 2006 – “in particular, a ten-page appendix known as Appendix M” – “go beyond the Geneva-based restrictions of the original field manual.” Indeed, the Manual accepted 19 forms of interrogation and the practice of extraordinary rendition. Further, retired Admiral Dennis Blair, Obama’s director of national intelligence, told a Senate confirmation hearing that the Army Field Manual would itself be changed, potentially allowing new forms of harsh interrogation, but that such changes would remain classified.

2) Obama’s supposed banning of the CIA’s secret rendition programmes did not actually prevent the CIA from extra-judicially apprehending and detaining innocent civilians without evidence or due process, but only emphasized, in the words of one White House official: “There is not going to be rendition to any country that engages in torture.” The problem here is that rendered detainees have already been sent to countries across the EU that do not officially sanction torture, where they were nevertheless tortured. Secret CIA detention facilities have been hosted in, for instance, Poland, and were previously justified by the Bush administration’s State Department under exactly the same notion that Poland did not engage in torture. Even Obama’s own counterterrorism adviser John Brennan, had insisted that rendition is “absolutely vital.”

3) Finally, while purportedly banning the CIA’s use of secret prisons, the prohibitions “do not refer to facilities used only to hold people on a short-term, transitory basis.” Yet without specifying an actual time-limit clearly defining the meaning of “short-term” and “transitory”, Obama’s injunctions effectively still permitted indefinite detention, as long as the CIA would officially re-classify the period of detention as designed to be short-term and transitory.

The end result was a successful re-configuration of the public presentation of US military intelligence practices, coupled with nominal legal caveats permitting them to continue relatively unimpeded – essentially a giant PR exercise. Meanwhile, the vast post-9/11 domestic national security apparatus denying habeas corpus, undermining due process, and facilitating mass surveillance as well as intrusive social control powers brought in by the Bush administration was not repudiated, but retained.

There is also the issue of prosecuting the Bush administration officials who ordered torture in prisons including Guantánamo. The United Nations Special Rapporteur on Torture Manfred Nowak has said on CNN:

“In our report that we sent to the United Nations, we made it clear that former Defense Secretary Donald Rumsfeld clearly authorized torture methods and he was told at that time by Alberto Mora, the legal council of the Navy, ‘Mr. Secretary, what you are actual ordering here amounts to torture.’ So, there we have the clear evidence that Mr. Rumsfeld knew what he was doing but, nevertheless, he ordered torture.”

Cynthia McKinney has written the following about the statment from Manfred Nowak:

On Wednesday, January 28th, I sat in front of the television and I couldn't believe what I was hearing. Exactly what I've been saying, myself. But it was coming from an unexpected source: the United Nations Special Rapporteur on Torture, Manfred Nowak. I wrote down every word. He said that the United Nations has proof that former Secretary of Defense Donald Rumsfeld knowingly approved of torture as a policy for the United States. He said that President Barack Obama has a responsibility to investigate and prosecute those who condoned, conducted, or approved of torture.

Further, Jonathan Turley, in an MSNBC interview stated that if Obama fails to investigate or prosecute that he would be an "accessory."