Information coming in from today's march outside Menwith Hill in celebration of July 4th
The march wasn't allowed to go onto the A59, before reaching this point there was a complaint about somebody wearing an offensive t-shirt (f*** bush, etc) and the person was asked to remove it. Upon refusing to do so he was arrested, and another woman was arrested for causing trouble.

A number of protesters then went onto the A59 despite being told not to and were arrested. The main march then returned back to the front gates.

6 people have been arrested in total, and are all still being held at Harrogate police station. 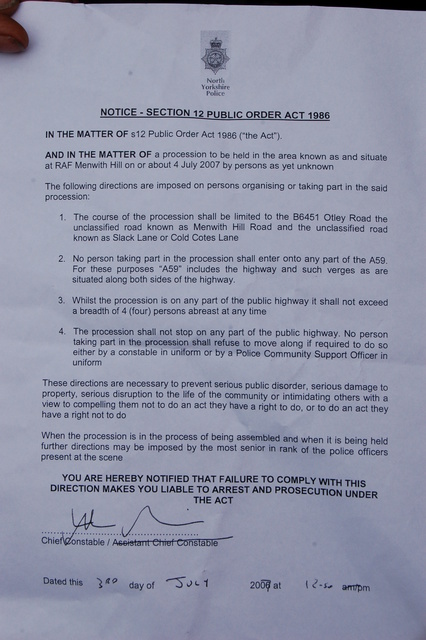 The Police served a Section 12 notice under the Public Order Act 1986 to prevent the circumnavigation of the NSA Menwith Hill base -- this is the first time that the annual 4th July Independence FROM America protest was not allowed to walk all the way around the base.

lad released with £80 fine under s5 of public order act, woman still held, expected soon. Other 4 appear to have been a rumour.

Audio
Senior Officer present (Mark Khan [Bronze?]) uses intimidation and section 12 to bring the procession round the base to a halt. He never states that he is worried about "serious disruption" only disruption. and is more concerned about safety (safety doesn't appear to be covered by section 12) than any of the serious disruption of the type that is covered in the act. And if, as is stated above, there is no history of such "seriousness" on previous walks round the base it looks like the section 12 was unjustifiable.