After over 14 months spent protecting a village green from illegal destruction protesters in Sherwood forest were evicted on 6th December 2004 after the Police turned up without warning at 8am.

They had been protesting against the unnecessary destruction of an area of woodland and grassland, which is recognised for its conservation importance; the developers (Bellway Homes) and the Mansfield District Council are seeking to build an unnecessary, and ill-placed, road junction across the Green.

The trees were evicted quite fast [photos], and the tunnels were also evicted by the end of the day.

No notice was given that the evictions were to take place and the Under-Sheriff of Nottingham (whose ultimately in charge of evictions in the area) told the protesters only last week, that there would not be an eviction while legal cases were still outstanding. 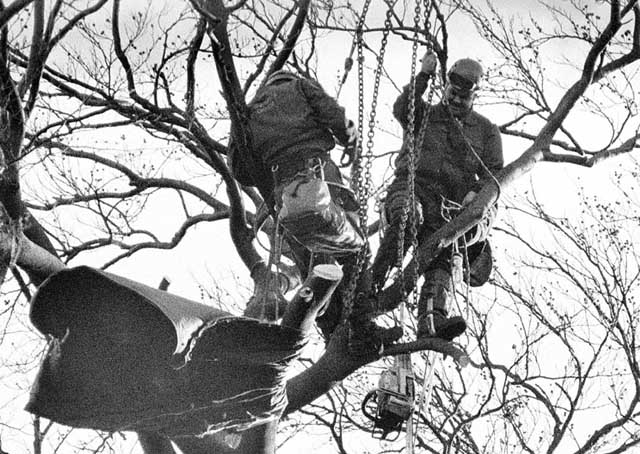 News from the start of the eviction

Protesters and local people are currently trying to prevent the police from getting near the tunnels to stop any further destruction of the village green.

As this release goes out, the beech tree which is at least two hundred years old is facing the axe.

Several people are known to be in tunnels, local residents watch in anger, and the Nottinghamshire Police who previously assured them that no tree-felling would take place until the tunnels had been evicted, have now allowed felling to commence of very large mature trees, directly above the siting of the tunnels which could cause a fatal tunnel collapse.

Local residents had previously been assured by the Under-Sheriff that no eviction and related damage to the land and trees would take place until there was an opportunity to put their case at Court to prevent any work commencing until their Village Green rights are confirmed at a public inquiry.

Bellway Homes are attempting to destroy a group of ancient trees and a natural meadowland to build what campaigners say is an unnecessary road junction. The area is supposedly guarded by a Tree Protection Order as it possesses a 300 year old beech tree, yet the council are refusing to take any action against the developers.