Worldwide originator of reggae and champion of Rastafarianism, Bob Marley, professed global peace and love, among with freedom from exploitation. A civil rights leader as well as a pioneering musician, Robert Nesta Marley led the spiritual emancipation against racial oppression, and was a beacon of light for the African-American and African-Caribbean diaspora, and a source of hope for the motherland, Africa. During his worldwide career, professional music photographers joined him on his concert tours throughout the world. One of these, who has written extensively about her role snapping the great Bob Marley, is Lindsay Donald from the UK, her book, Portrait of a Legend and other Folks, released in 2013 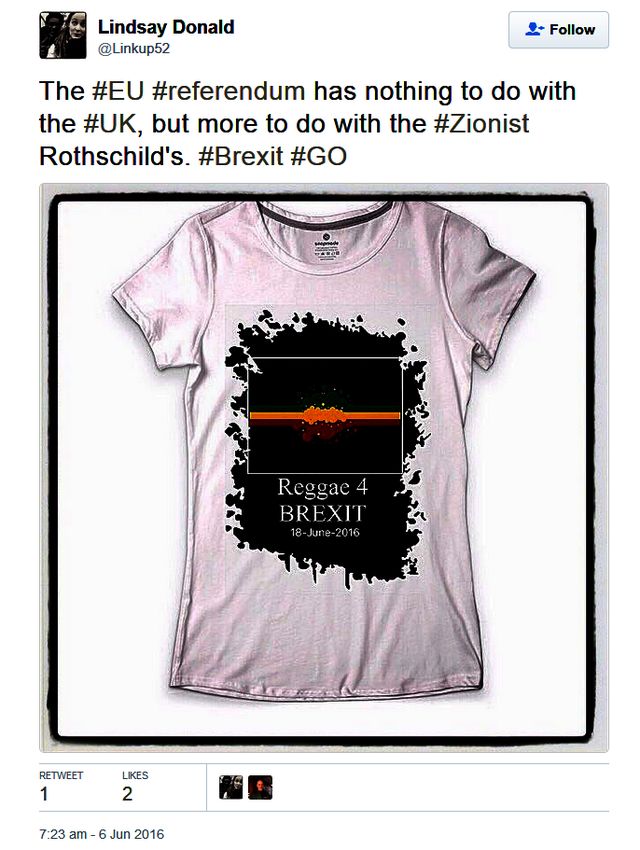 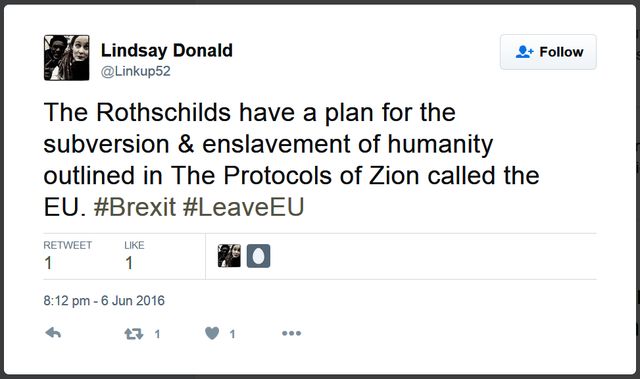 Edlers of the Protocols of Zion used to support #Brexit 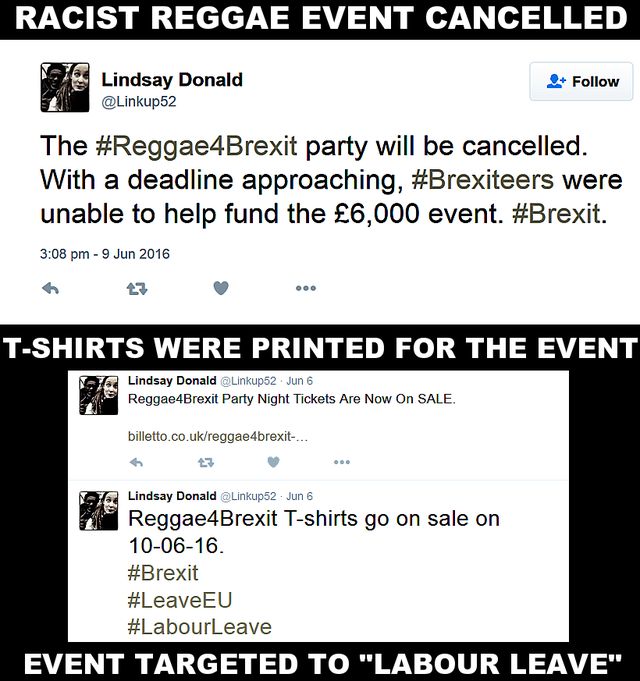 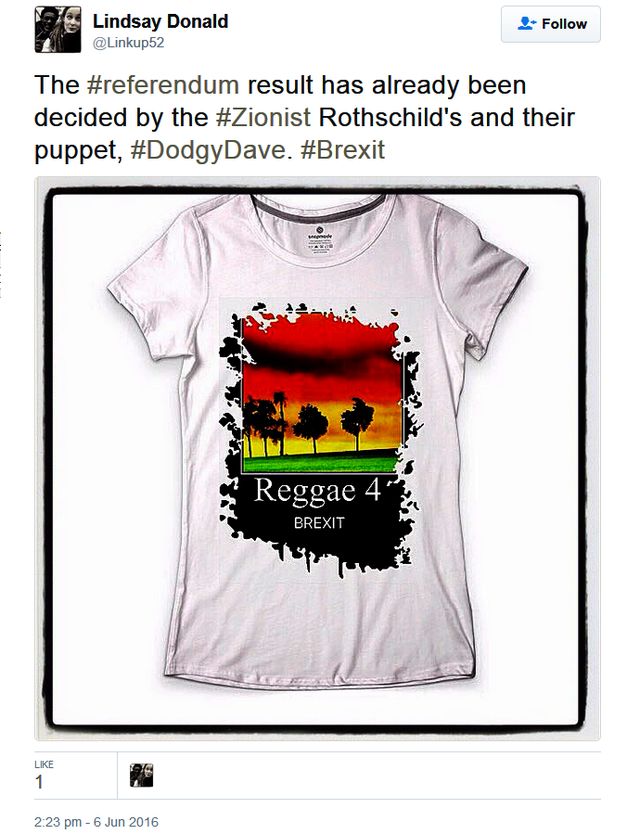 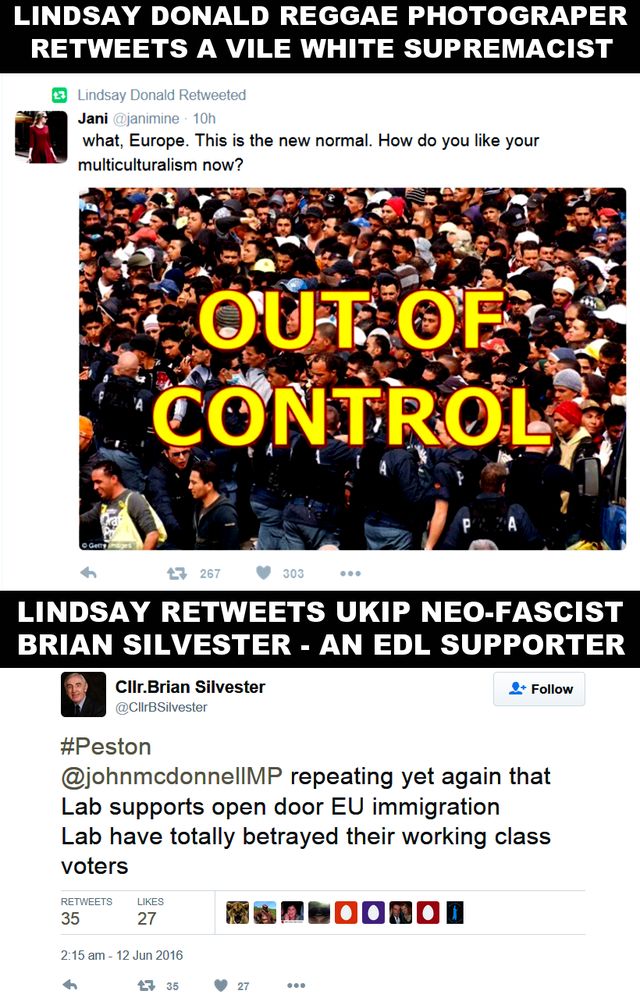 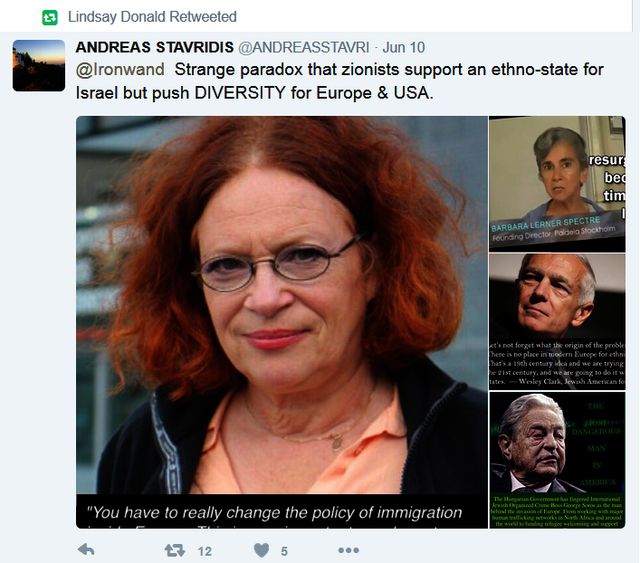 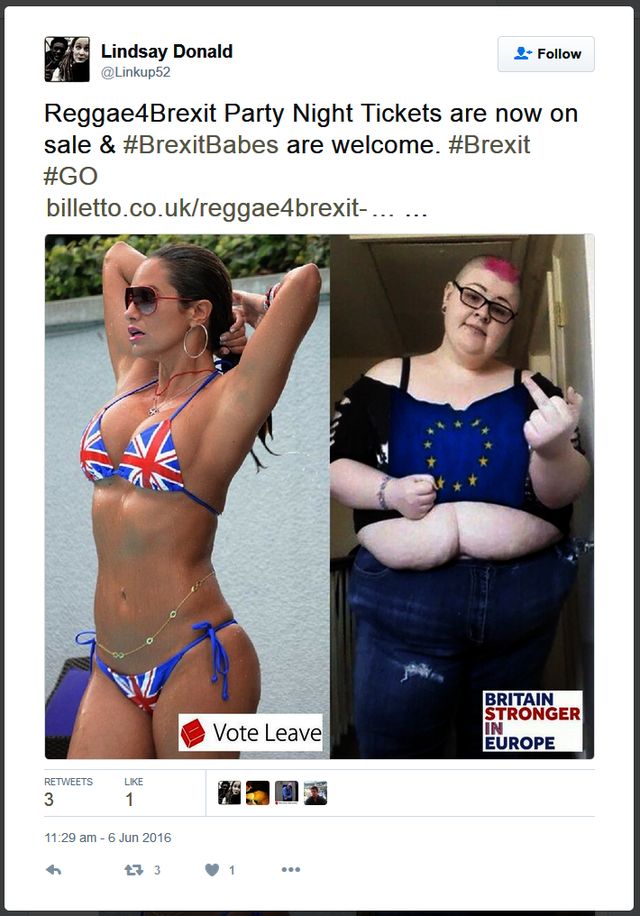 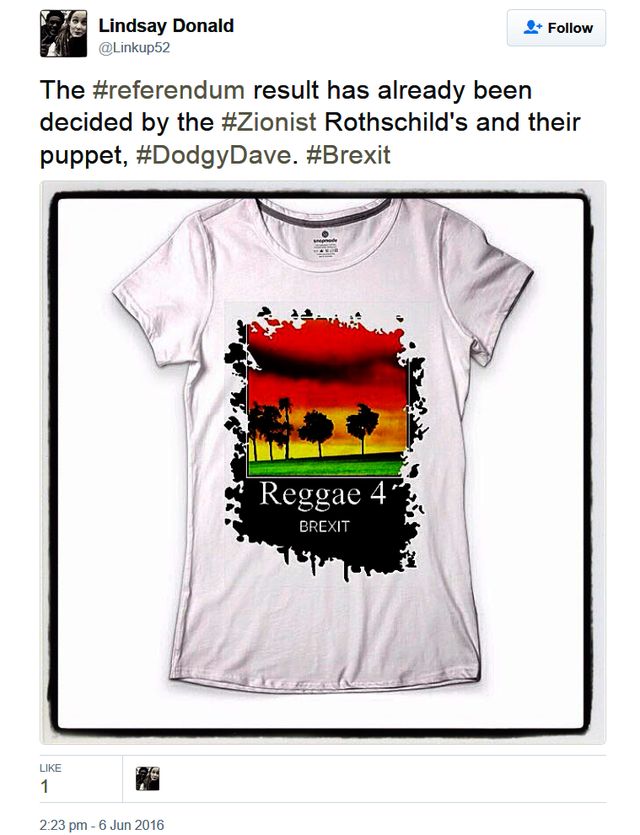 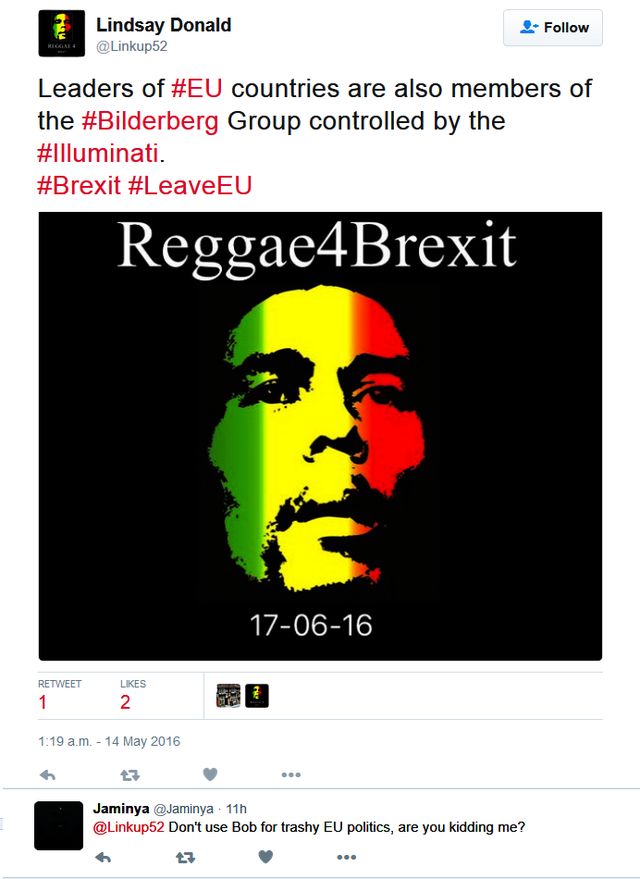 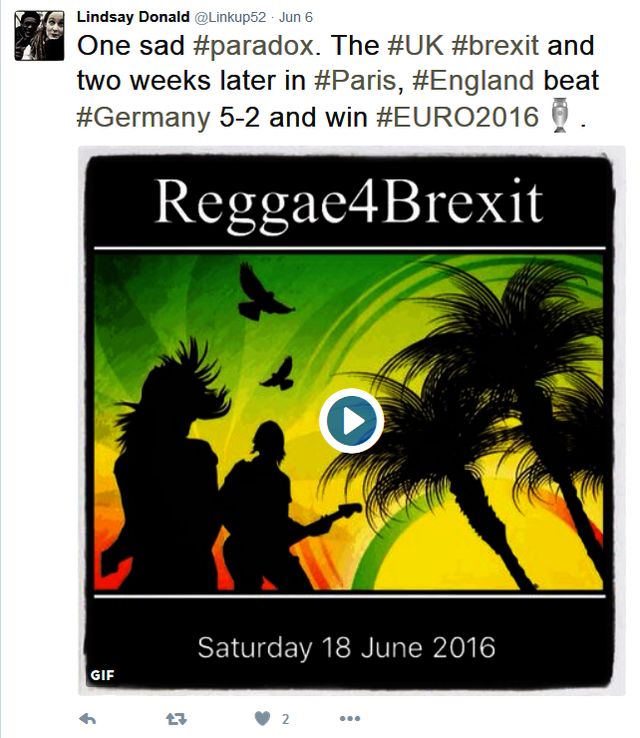 A neo-nazi Labour Leave supporter, Lindsay tried to hold a rightwing political #Brexit reggae party called "Reggae4Brexit", exploiting his image, without permission, the original event planned for a South Bank gallery performance space, but after complaints from the Marley family, she was forced to drop Bob's image, and switch the event to the Woolston Manor Golf and Country Club, Chigwell, Essex. Blaming Jewish people for the cancellation of the event, and the Rothschild family for opposing #Brexit, Lindsay made reference to the Protocols of the Elders of Zion, and began posting regular Anti-Semitic, Islamophobic, sexist and anti-immigrant posts and memes, including UKIP extremists and white supremacist offerings. Thankfully, nobody bought tickets for her #Brexit fascist reggae events, however, hardcore anti-Semite Lindsay continues to steal the limelight from Bob Marley, and is in the process of writing further books about Bob Marley, with further reggae events planned.

The idea that Jewish financiers are behind a European Union conspiracy, and are at the heart of Vote Leave, is gathering pace via social media, with a broad spectrum of toxic rightists, from Tommy Robinson and Pegida through to SS-fetishists, Hitler worshippers and the KKK. Tommy himself has posted many references to the supposed NWO and George Soros, in a manner of anti-Semitic similarity which invokes the blood libels of Mein Kampf where Adolf Hitler accuses Jewish politicians and bankers of welcoming immigrant, non-Aryan people into Germany to invade white society. Whereas back in Hitler's day, jazz music was seen as a vehicle for "white genocide", today's far right theorists target halal meat, spinning lies about profits from kebabs and curries funding Islamic State.

During the Iraq War, the twin towers fresh in people's memory, conspiracy loons powered by former snooker commentator David Icke veered towards a leftwing fringe which became the #Truther movement, obsessed with #Bilderberg and blood-sucking alien lizards, however, with the rise of the BNP in the mid 00s, and the birth of radicalising Islamophobia stateside, crossing the Atlantic, the far right began to claim conspiracy theories as their own, hook, line and sinker. Robert Cottage from Pendle, convicted of a chemical weapons plot with a BNP accomplice, was found to have attended regular Truther meetings and was a fan of David Icke. Since then, Nick Griffin became a fan, and with the birth of the EDL and the so-called "Infidel" splinter movements, new blood entering "nationalism" through football hooliganism, more and more anti-Asian racists cum Islamophobes, began frighteningly linking non-white immigration with ZOG or the New World Order.

Thanks to the bile tweeted by troll Joshua Bonehill, the deadly, dark shadow of old-fashioned neo-nazi anti-Semitism has returned, repackaged by young "fash block" thugs called National Action, mirroring a reinvigoration of anti-Semites worldwide, none more so than the return to the press of the KKK, coming out in support of Donald Trump. Between 2008 and 2014, groups such as the EDL seriously believed that waving the Israeli flag, likewise the rainbow flag, would separate Islamophobes from their anti-Semitic ideologues, but since the rise of groups such as the NEI, SEA and of course, Hitler-advocate Shane the Diddyman's NWI, and the "unity marches", the boundaries between anti-Muslim and anti-Jewish hate have become extensively blurred, in the UK at least.

Whilst much Islamophobia stateside is pushed by Pamela Geller and her Rapturist Christian fundamental friends, who have been brainwashed-ISIS-like into believing Jesus will return to earth to destroy Muslims (and Jews who don't convert), extremist faith maintaining a wedge between Islamophobia and anti-Semitism, in the UK, where Christian extremists are relatively few and far between, the young to middle-age Hooligan element have no qualms in hating Jews as well as Muslims. Many have a BNP or NF background, which makes a broad spectrum of hate all the more tangible. Pegida UK was designed by Pam Geller to get British "patriots" loving Israel again....... as if they ever did, not that Tommy Robinson is complaining, as he laughs all the way from bucket takings at Pegida rallies to the bank.

Despite his extensive criminal convictions, Pamela Geller will be applying for a visa to accompany Pam Geller and Anne-Marie Waters of UKIP to Israel in 2017, pointless a public relations exercise if there ever was one, as British nationalists don't care less about either Israel or Palestine.

Back to reggae. As Bob Marley's trusted tour photographer, Lindsay Donald is using his fame to push an anti-immigrant, neo-Nazi agenda at odds with Bob's peace and love. A horrific neo-nazi on a par with holocaust denier musician Alison Chabloz, loathing refugees, and openly campaigning for Vote Leave / #Brexit, she epitomises the hijacking of the Eurosceptic vote by the far right.

She intends to launch future exhibitions of Bob Marley's photos, write further books, and host reggae music events. Please make everybody involved with the reggae scene aware of Lindsay Donald's views, so she can be boycotted forever more.