UKIP leader and Brexiteer in-Chief Nigel Farage has blatantly copied the language of the EDL, Britain First and BNP with a mightily repulsive far right rant about immigrants, accusing them of being rapists, making reference to Cologne (an incident which was investigated and not linked to refugees), in the same week Rupert Murdoch's Sun utilised neo-nazi white supremacist language is (incorrectly) describing the BBC as "Anti-white". Arrogant, domineering and overtly racist, Farage has proven once and for all that UKIP are a trojan horse for the thuggish far right. 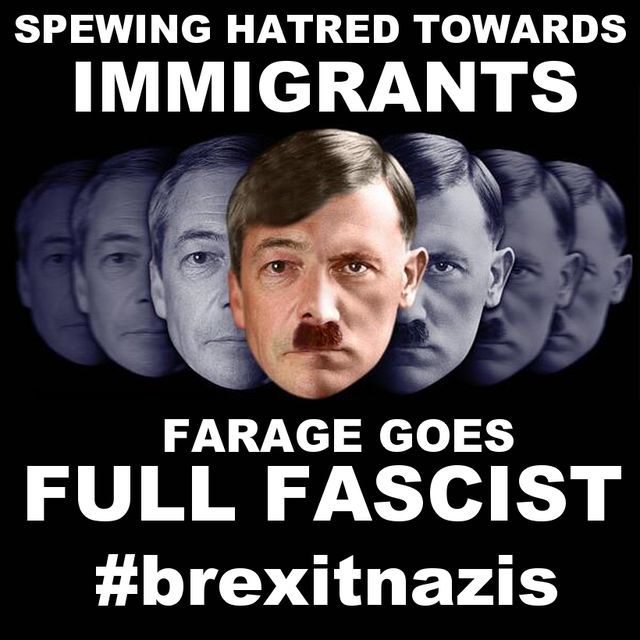 For several years, on social media, UKIP have been cheerleading fascist organisations like Anne-Marie Waters' Pegida and Paul Golding's Britain First, so today's horrific outburst of hate should come as no surprise. Nigel Farage must now be countered by public rallies of militant ANTIFA to let the world know that all decent-minded people absolutely abhor Farage's neo-nazi views, and will oppose them every step of the way.

If you are still are not sure about Farage's fascist credentials, take a look at the UKIP's most prolific white supremacist tweeter, anti-immigrant friend of Nigel Farage, Kipper publicist David Jones: -

David Jones is old un-reconstituted BNP turned Kipper habitual tweeter with 43,000 followers including all the leading UKIP politicians, and Farage himself counts as "Jones" as a personal friend.

Whilst fellow Brexiteers in the Tory ranks have detached themselves from Farage's most recent racist comments, Labour's leading anti-European campaigner Kate Hoey MP appeared to defend Farage's abysmal remarks. It is absolutely shameful for a parliamentary Labour politician yo shore-up Fuhrage by making supportive comments referring to "specific cultures which treat women badly", as if institutional sexism in a nation's governance includes the predisposition to rape - as if rape if remotely alien to the white male powerhouses of wealthy NATO countries.

With the latest news #Brexit is currently leading by three points in the polls, concerns must be raised amongst young people from multicultural countries that an independent Great Britain will be an intolerant one where stereotypes and far right generalisations and falsehoods become truth, where a man or woman is judged by their religion, nationality or race, and where discrimination is worsening not improving, following the worrying trends prevalent within Donald Trump's electoral campaign.

Following the apparently "immigrant" led sexual assaults that occurred in Cologne, a female Belgian reporter was sexually assaulted by three white men on camera, an incident unreported by the rightwing mainstream media, and totally ignored by groups such as Pegida, EDL, Britain First, and of course, UKIP.

Police in Cologne have re-examined video footage of the assaults in Cologne, and social media claims that the assailants were all non-white, were found to be not grounded in fact. So far, only one non-German has been charged with sexual assault, an Algerian man, and there was absolutely no evidence that refugees (or "rapefugees" as the far right vilifyingly call people fleeing danger, seeking asylum), were involved in the New Year's eve Cologne groping incidents. Later witnesses report noticing criminal behaviour from drunken white German men, so previous reporting of "immigrant rapes" was highly irresponsible, and playing up to the Pegida / Alternative For Germany narrative.

Facts do not matter to the British Far Right - neither do they do UKIP, who have proven themselves time and time again to be the inheritors of national socialist ideals. Starting off as an upper-middle class grouping of former Eurosceptic Tories, UKIP have lurched further and further to the right, fired up with rightwing tabloid headlines from the Mail, Sun and Express. Whilst Brexiteers accuse Remain campaigners such as the Official Stronger-In camp of "project fear, the real fear is generated by UKIP and the rightwing Tories' scapegoating of refugees and immigrants, and downright lies spun about Turkey's supposed future membership of the EU. By playing up to xenophobia and fear of the unknown, Brexiteers have helped their campaign to shoot into the lead with repulsive politics of the lowest common denominator.

"Immigration focus is the turning-point of the campaign", admitted Nigel Farage today, fully aware that hate politics is, in a toxically racist environment, just in Germany in the 1930s, a vote winner: -

Back to Nigel Farage, in 2013, he was revealed to be a racist school-bully from teachers who reported on him during his schooldays, and he was reprimanded several times for tormenting non-white pupils with what his teachers called "openly fascist views".

Dr Alan Sked, the founder of UKIP's forerunner the Referendum Party, has testified that Nigel Farage commented "We will never win the n*gger vote".....

Farage has never sued Sked, amid rumours there is taped testimony of Farage's racism.

Whereas the FN is still openly fascist despite a supposed makeover, UKIP has, from day one, pretended to be a legitimate political party and not a neo-nazi organisation, but Farage's sickening racist outburst proves the party are no different from any other European neo-fascist party. How long before Farage starts posting on Stormfront?????

Forgetting the Kipper fascism for a second, whereas an independent Greece free from the EU would have resulted in an independent leftwing state, you are voting for Tory hegemony in which hardline Thatcherites will do as they please, and crush the poor into dust. A solidly blue England boosted in future years by a Scotland breakaway, would mean decades of oppression plus institutional racism. Tony Blair only became PM by ditching labour's age-old principles, selling off public services, and selling his soul to warmongering Rupert Murdoch.