This Saturday, the openly racist and homophobic neo-Nazis of the South West Infidels and their cohorts in the EDL goosestep through the multicultural streets of Bristol in the misguided belief that Hitler sympathisers are in the majority in South West Britain. Led by German SS fetishist Ed Dowden, a loner who spends all day trolling his local newspaper the Bristol Post posting hatred against Bristol's Somalian community, his legion of straight-arm saluters are well and truly set for humiliation by local antifascists who, like the vast majority of Bristolians, well and truly reject fascism outright, and will not stand for a moronic rabble of drunken fascist imbeciles shouting obscenities at non-white people, Muslims and refugees. Whilst are SWI are openly homophobic, many are believed to be closet homosexuals, and according to the Bristol Post, their march will coincide with the arrival of a fleet of stark-bollock-naked hunky, well-toned male cyclists on a protest bike ride, a "timely coincidence" will put immense pressure upon the bigots to keep their sexuality under wraps. 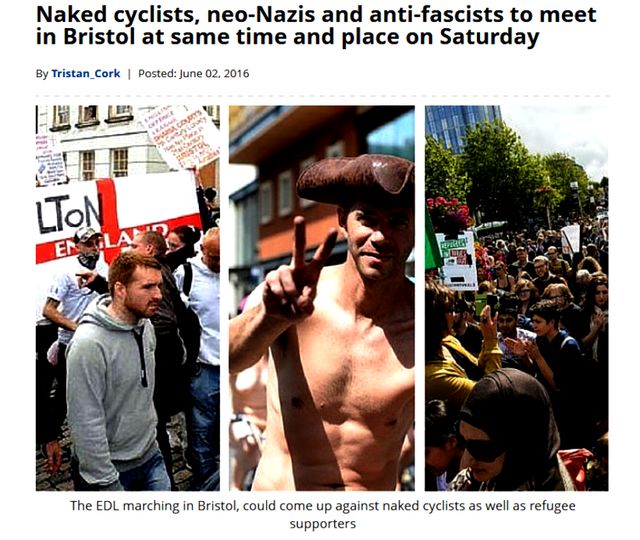 Hot, sweaty jockstraps parading into Bristol the same time as Dowden's Nazi troops is sure to get the SWI's drunken and sexually confused morons hot and bothered, especially if it is a warm day like the weathermen predicted. It won't be "raining men", more like "raining fists", however, if fellow fascists let their love fly - any member of the SWI openly shouting "hallelujah" at the arrival of the naked cyclists is sure to get the far right demo kicking off big-time. Things will ultimately turn nasty if their homophobic gets the better of them.

The hypocritical immaturity of the British Far Right is laughable. Pam Geller's "smart idea" to set up LGBT and Jewish EDL subdivisions was one of the most blatantly doomed attempts at window-dressing imaginable, which famously ended with little Tommy English fleeing tail between legs for Pegida, not that there were many openly gay members even in the heyday of the EDL, four or five members at most from several thousands of supporters. From all accounts, those gay and lesbian EDLers who dared to come out and march under the rainbow flag were subjected to extreme violence in Wetherspoons toilets, violent fascist homophobic assaults which made so many LGBT fascists reluctant to reveal their true selves. Whilst British fascism has for a long time contained gay nazis, Nicky Crane the utmost of these - a hardline NF Hitler-loving neo-Nazi who claimed to have slept with Nick Griffin (former leader of the BNP), since the demise of Ernst Rohm - the founding father of Nazism, few are willing to be out and proud, whilst active members of the far right, for their own safety.

As Gerry Gable, editor of the anti-fascist magazine ‘Searchlight’, pointed out, “I have looked at Britain’s Nazi groups for decades and this homophobic hypocrisy has been there all the time. I cannot think of any organisation on the extreme right that hasn’t attacked people on the grounds of their sexual preference and at the same time contained many gay officers and activists.”

The SWI's closet gay members will of course fantasise that the handsome, fit and agile male cyclists arriving at the same place and time as the Stella-addled rabble would fancy them, if they happened to be gay, such is the self-delusion of the fascist and neo-nazi mindset. In reality, few people of any gender or sexuality would wish to get within a hundred years of a drunken fash loser with his pants down.

Participants of the Bristol fascist gathering, such as Dowden himself, will ultimately end up alone, returning to their mother's house to retire for an early night's self-pleasure, or pity wank, as is colloquially known.

Ed Dowden has a particular bugbear with black African men such as Somalians, believing in time-honoured eugenic style that black men are better endowed than his pitiful Aryan self.

Just a hundred yards from where the naked cyclists and fascists will interact, none other than UKIP leader Nigel Farage will be gathering to preach his regular #Brexit bollocks - a man who looks like he would make a natural Carry On Actor oozing double-entendres from every orifice galore. Small wonder they are making Carry On films again.