MARK COLLETT, lover of Adolf Hitler and AIDS, and hater of black and Jewish people, is back, and out campaigning in the streets of Leeds for the Brexit campaign, on behalf of Vote Leave. Having left the BNP a good few years ago, following paedophilia allegations from fellow BNP members, the Leeds-based former BNP Youth Leader from Leicestershire is back in public life, as a Brexit campaigner, with full approval from Conservatives in the Vote Leave campaign, handing out leaflets along Briggate in Leeds. Describing Adolf Hitler as a "great man", his swastika-tattooed partner Eva Van Housen was also participating at the stall. It says a lot for the Brexit campaign when they allow hardcore neo-nazis to do their bidding...... 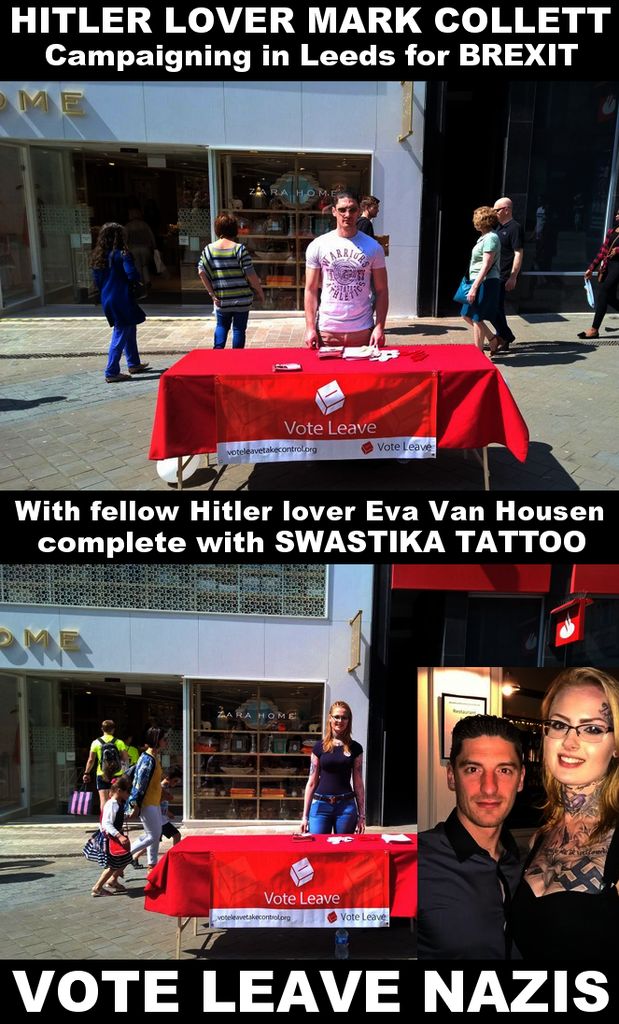 Mark Collett has made the most of his work for Michael Gove-led Vote Leave organisation by posting pictures of his and his swastika-sporting girlfriend's campaigning in Leeds city centre. Any Jewish Brexiteers who have leant their support to Vote Leave, should think very carefully about supporting a campaign which employs Holocaust deniers and Hitler worshippers in their ranks.

So much for the Conservative Party making a big issue of alleged anti-Semitism within the ranks of the Labour Party when the Tory's own Eurosceptic campaign "Vote Leave" have no problem about all-out Jewish-loathing national socialists manning their stalls.

TWEET THIS EXPOSE TO ALL THE KIPPERS AND ANTI-EU TORIES YOU CAN FIND!