IN OTHER NEWS: Whilst it's okay to have Bob as your uncle, having Steve Uncles as your uncle would be a disaster, for the English Democrats organiser and PCC candidate, who invited all the ex-BNP neo-nazis to the party, has well and truly nailed his colours to the white supremacist mast. Over the weekend, Uncles tweeted an appalling racist tweet accusing a non-white race of stealing water at the London Marathon.

Since punch-drunk ex-UKIP boxer Winston McKenzie, the only black man in the white power village, failed to fill in his nomination forms correctly, Uncles sees fit to reach out and appeal to his old BNP-mindset, and fellow WS scum including BNP stalwarts Eddy Butler and German NPD-supporting neo-nazi Chris Beverley from Leeds, in stereotyping London's black population as well as Muslims. Despite the EDL pretending not to be anti-black, not a word was parped in condemnation from the Bugle Brigade, Toni Bugle from "MARIAS fame" stonily silent. Most if not all white Islamophobes happen to be anti-black, also. Whilst Uncles himself, tries desperately to steal oxygen from UKIP. 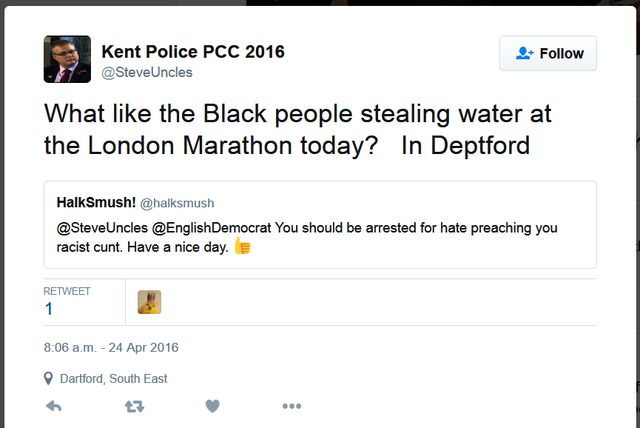 One Title Loss Too Many - And He's A Deluded Uncle Tom

Having received one-too-many knock-downs in the ring, Winston McKenzie is blissfully unaware of his boss - Steve Uncles's repulsive anti-black tweet, so any twitter users reading this, please share the screenshot with him, just to let the Uncle Toms of this world know they have sold their souls to Uncles and his white power ways. Every organised racist loves an uncle tom, English Democrats included.

No mention of the English Democrats is complete without a quick word about Toni Bugle and her repeated denials that she was ever a member of the EDL, despite Twitter recording all her old pro-EDL tweets for posterity. The following article released last week reveals Bugle cheerleading the EDL since her first London demo with Tommy Robinson, and Bugles even goes as far as defending paedophiles in the EDL as only becoming nonces after they left the EDL, which is pretty shameful for a PCC candidate: -

Take a look, and once again, share the damning screenshots about the Bugler. The Eng Dems are utterly despicable unreformed neo-nazi filth.