Sheffield Anarchist Book Fair looks set to be the biggest yet. Now in its seventh year, stall and workshop bookings and other enquiries are up around 25% on the previous year. It is on Saturday 23rd April 2016, 10am-6pm at Showroom Workstation, 15 Paternoster Row, Sheffield S1 2BX. Entrance is free. 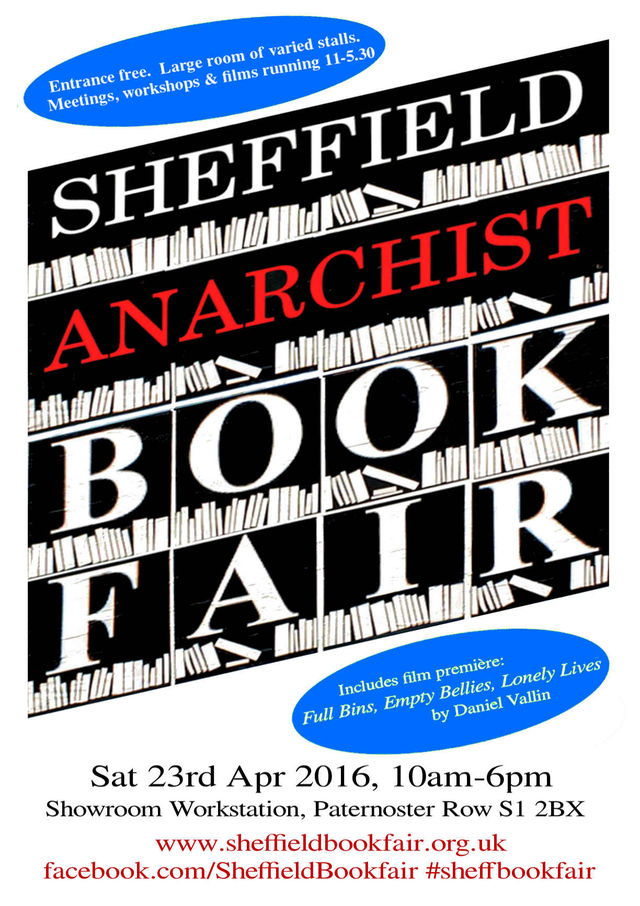 
Sheffield Anarchist Book Fair brings together radical booksellers, distributors, independent presses, and political groups from around the country, and features books, pamphlets, zines, art, crafts and films. It includes speakers, panels and workshops, and is followed by an evening social.

This year it includes the première of "Full Bins, Empty Bellies, Lonely Lives", a new locally-made documentary. Described as the story of food poverty and social isolation in a land of plenty, the film examines three seemingly self-contradictory issues in the UK today. Food insecurity alongside mass food wastage, and at the same time so many people experience another type of poverty; loneliness. Director Daniel Vallin looks for the causes of this paradox and asks how we can 'join the dots' to solve these problems. Green Party Leader Natalie Bennett is among the interviewees. Ultimately uplifting, the film finds solutions in new experiments with community food sharing known as the Social Eating movement. This film screening starts at 12 noon.

This is the poster for the 2016 Sheffield Anarchist Book Fair. Like the full programme, it's available to download from the website, and also copies of both will be available on the day (if you want a poster for your bedroom wall!)