A senior Buddhist faith organiser for the Keighley and Burnley areas, "Tyke Strivers" AKA Leo Robinson, is a vile anti-Muslim bigot (and avid fan of David Icke's divisive conspiracy theories), who is helping to campaign locally for Tommy Robinson's Pegida UK Organisation. Managing a local Buddhist meditation retreat where worshippers are unaware of his extremist political leanings, Leo Robinson's twitter account suggests he is planning street-level anti-Muslim campaigning locally in Keighley in the coming months to divisively to help turn community against community, in a town which a grooming gang were recently jailed. UK Buddhists are peace loving people and are on the whole anti-racists, thus Yorkshire's Buddhist communities must be made aware of the extreme hatred of the administrator of the Keighley and Burnley Kadampa Buddhist Centres ( a registered charity). For a United Kingdom faith leader to spread hate and intolerance on social media, and use his public accounts to support Pegida's march in Birmingham, is totally unacceptable. All worshippers locally must be made aware of this hate-preacher in their midst. 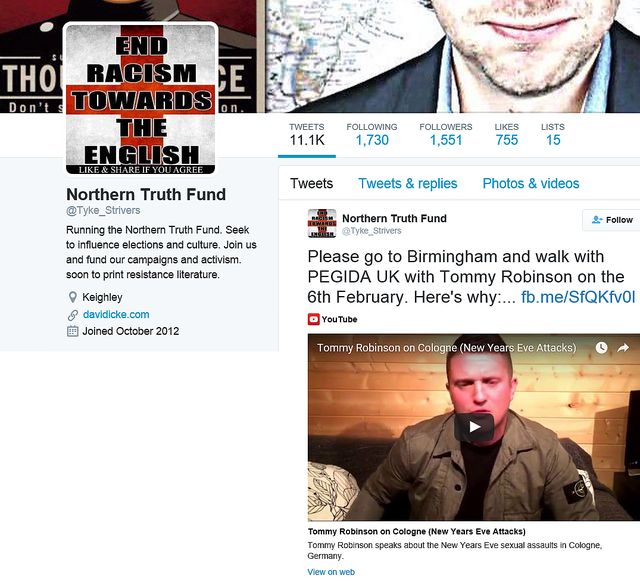 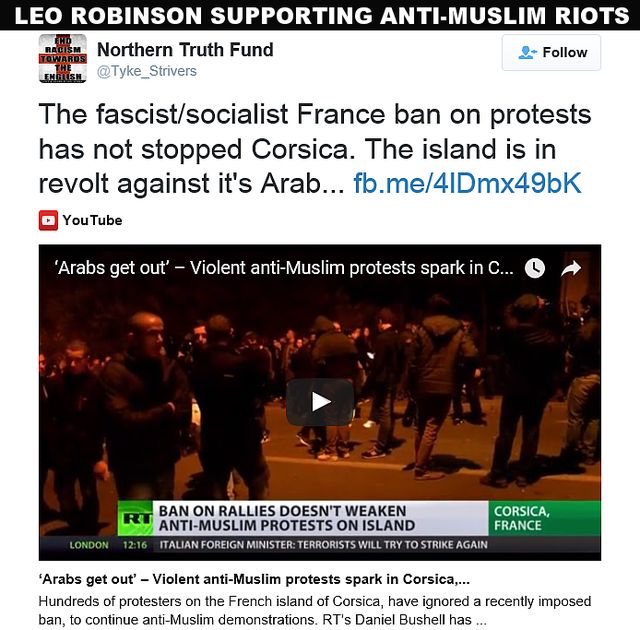 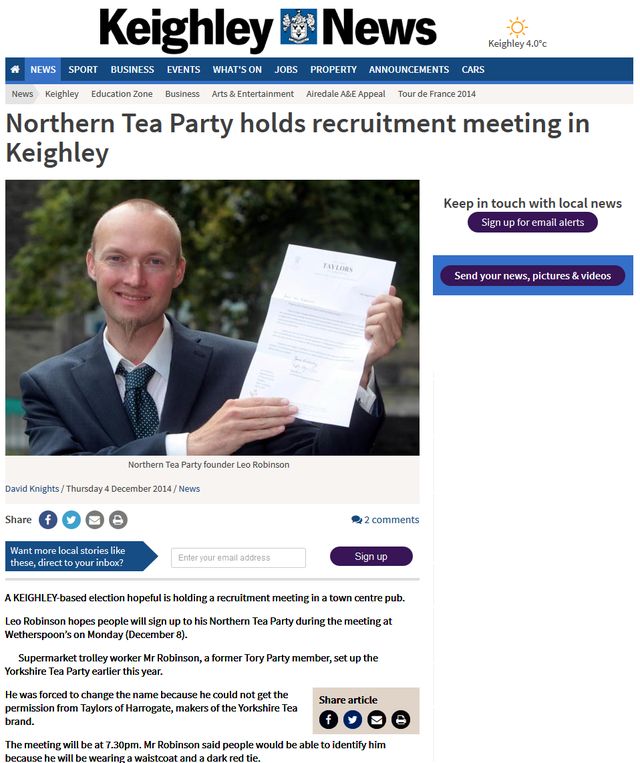 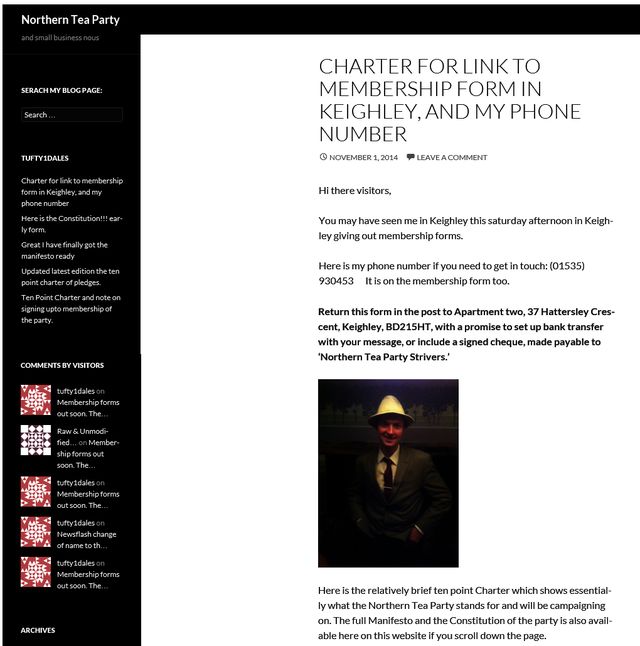 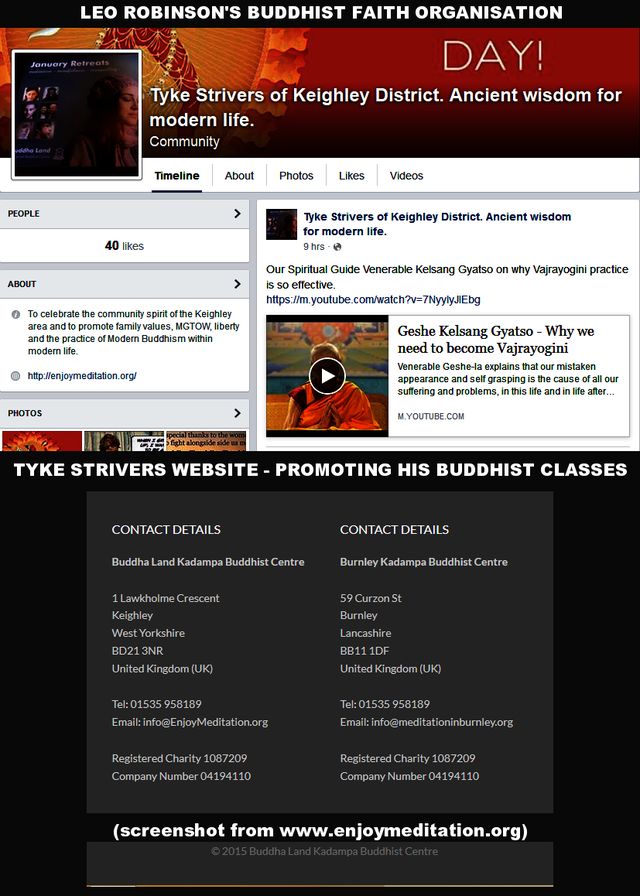 From little green men to lizards, former sports commentator David Icke's followers are renowned believers in conspiracy theories, plenty of which were related to 9/11, some blaming Jewish people for what they call the New World Order, or ZOG as they like to call it. The far right have logged onto his internet conspiracist forums in large numbers, tempted by the sporadic anti-Semitism. BNP chemical bomb terrorist from Colne, Lancashire, Robert Cottage believed in such conspiracies, inspired by the anti-Jewish hate on the site, however it is only in recent years that "Truthers", as they like to call themselves, have warmed to Islamophobia big-time. Thanks to her anti-jihadist movement, Pam Geller has overtaken Pat Buchanan as Ickeists' favourite hatemonger due to their extreme anti-Muslim narratives. "Keighley Truthers" led by racist Keighley Buddhist leader, ex-Tory member "Tyke Strivers" - real name Leo Robinson, are using Facebook and Twitter to encourage hatred against Muslims and immigrants, and are championing Tommy Robinson's upcoming Birmingham neo-nazi demo.

Leo Robinson seemingly underwent a racist transformation in 2014, and his very own "Northern Tea Party" Facebook page, once a libertarian political party outfit, has now morphed into an extreme fascist group full of horrific anti-Muslim, anti-immigrant posts. Buddhist worshippers throughout West and North Yorkshire must be made aware of his extremist political leanings. The Northern Tea Party's Facebook page is abysmal, crammed full of Islamophobic and anti-refugee hate, supporting EDL, UKIP and Pegida and calling all North Africans rapists. Leo Robinson's main twitter account has become the Northern Truth Fund, linking his anti-Jihadism into the larger conspiracy theory "Truther" movement, the caption picture for his twitter page (see the screenshot) "End racism towards the English", with over one and a half thousand followers.

The Northern Tea Party, when launched two years ago, was going to be called the Yorkshire Tea Party until trademark holder Betty's Tea Room of Harrogate objected. Once a parochial ballot box for independence for Keighley from Bradford, what remains of the party on social media is now full of extreme racist content. Leo used to be busy out and about in Keighley on Saturday afternoons, handing out leaflets for his small political party, but gave up last year. His updated Pegida-supporting main twitter account entitled the "Northern Truth Fund" (see the link / screenshot), declares the intention to distribute far right leaflets in Keighley (maybe linked to the recent grooming trial convictions). The UK Buddhist faith community must be made aware what is happening. His racist propaganda race hatred goes against the core tenets of the Buddhist faith.

On Friday the 1st of January 2016, they held a Walk For World Peace in Haworth, organised by a man who tweets that he is glad to see Muslims dead, and refugees sent away to die. World peace BUT FOR WHOM?????

Just like the National Front in Scotland, fascist leaflets are becoming popular again amongst the far right, as social media hate reaches saturation. As an ally of Pegida UK and an ardent fan of UKIP, this vile anti-Muslim bigot and his fledgling street fascist campaigning movement need to be kept a close eye on. Keighley was once an ardent BNP stronghold, and Nick Griffin once stood in the Keighley electoral ward at the height of their popularity, as was Burnley where he also holds Buddhist classes. Leo's close ties to Pegida UK suggest he is likely to help do the bidding for Stephen Yorkshire Lennon as he seeks to sew disharmony amongst our local communities. Anybody spotting Leo handing out nazi leaflets should alert police or local antifascist organisations.

Thanks to his sheer stupidity, the Buddhist retreat manager, former Tory party member and "supermarket trolley worker" (as the Keighley News newspaper have described him), has revealed his personal details on his very own Yorkshire/Northern Tea Party website. So much for the possibility of fascists possessing brains.

http://www.keighleynews.co.uk/news/11644387.Northern_Tea_Party_holds_recruitment_meeting_in_Keighley/
Extremely troubling is Tyke Strivers AKA Leo Robinson's senior standing in his local Buddhist community, people who must be made aware of his horrific racist and Islamophobic views, which they are almost certainly not aware of. To repeat - UK Buddhists love peace and equality, and they will be absolutely mortified to learn that their local group meditation class leader is a neo-Nazi hatemonger. Anybody involved within Buddhism in the UK, please inform the faith's senior practitioners to make them aware of Leo Robinson's hate, so steps can be made to remove him from his position of authority in the faith. This is a stark reminder that vile extremists are present in all faiths.