You've seen the local Newspaper, you have read about it on social media - The violent fascist scum of the EDL are returning to Bradford to try to cause trouble in Bradford on Saturday October the 14th 2015. Following their two fruitless previous visits, the drunken, coked-up racist thugs are looking to make it third-time lucky, promising on facebook to "destroy Bradford", a city which for its world-famous multiculturalism, is always the ultimate target of any nazi group. It is essential that their wet dreams of racial warfare are crushed by an overwhelming show of unity between all communities. Print out the poster below (click on it for a larger printable png version). Also attend the rousing all-day Anti-fascist fundraiser next week Bradford's 1in12 club. 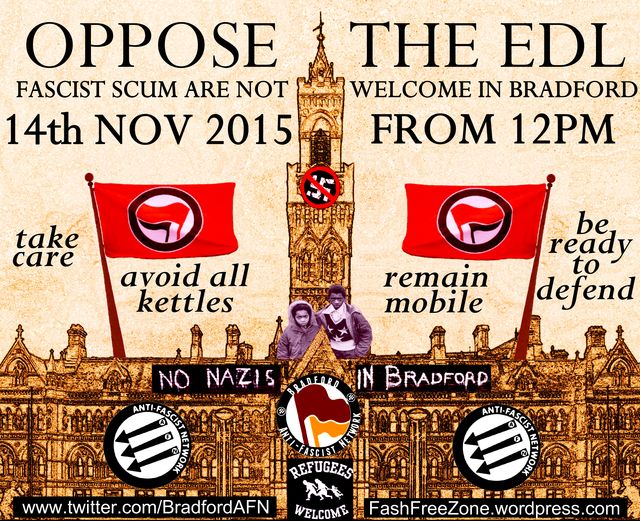 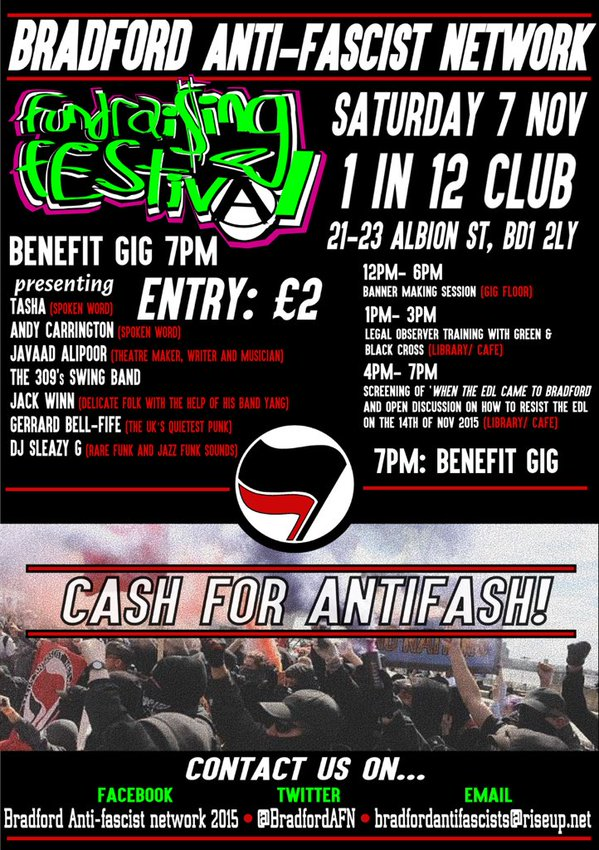 Get on the streets to oppose the extreme rightwing troublemakers as they aim to racially abuse Muslims, black people and refugees in our historic city built on immigration. From Irish labourers who arrived in Victorian times, to Asian millworkers, Windrush, through to EU migrant workers from Poland and Slovakia, and refugees from all around the world, including Iraqi Kurds, RDC Congolese communities and Syrian people, Bradford is indeed the City of Sanctuary - a title that irks the fascist rightwing right to the pit of their stomach. Regardless of what the EDL claim is their reason for coming to our city, the EDL are coming to wave "Refugees Not Welcome" banners. Last weekend, in Newcastle, they kicked off with police and passers-by, sickeningly abusing a mother and a young child as part of an anti-refugee protest, Hitler salutes and all. The EDL's Bradford visit is being co-organised by Newcastle's EDL jailbirds Ronnie Wood and Alan "send the black c*nts home" Spence.

As the poster wisely states, remain mobile and avoid all kettles. The EDL last time managed to racially abuse cinema-going families at the Leisure Exchange because the police fucked off when their march ended, allowing nazis to roam the Interchange and walk up towards the cinema. This time, all possible post-demo flashpoints need to be manned. And use your head. Hatemongers will be monitering social media - Do not tweet your location ("Hello Fash! Come and get me"). Instead, use group texts. When protecting the city centre from fash incursion, blend in, and go window shopping, bowling, sip coffee in a cafe, etc, so uniforms and plain clothes alike will not relocate you to the UAF pen(itentary) for the rest of the day. Only when the last nazi is on the train home, is the job anything like complete.

TRAVEL TIP - USE THE NATIONAL EXPRESS NOT THE TRAIN. The last thing you want to do is share your carriage with fascists and risk getting hurt. Whether you are travelling from Sheffield, Manchester or even Leeds, a group of people can save money by purchasing packets of ten multirider tickets which require no prebooking, (and valid for three months). Just turn up and hop on the coach at the last minute. From Leeds to Bradford this costs a mere £1.20 a ticket, making it much cheaper than the train.