One of Northern Rail's train management team - LNE Line Controller Gareth Jones, an avid anti-European and #brexit fan, posted an absolutely vile tweet calling for all immigrants to be shot. It is sickening to think such a sick mind is in control of the day-to-day running of local railway lines. Northern Rail's trains are used by people of all cultures and backgrounds including asylum seekers, oblivious to the knowledge their trains are being scheduled by honourable, caring, people, not monsters who fantasise about going to Calais and murdering refugees ("shooting them like seagulls"). 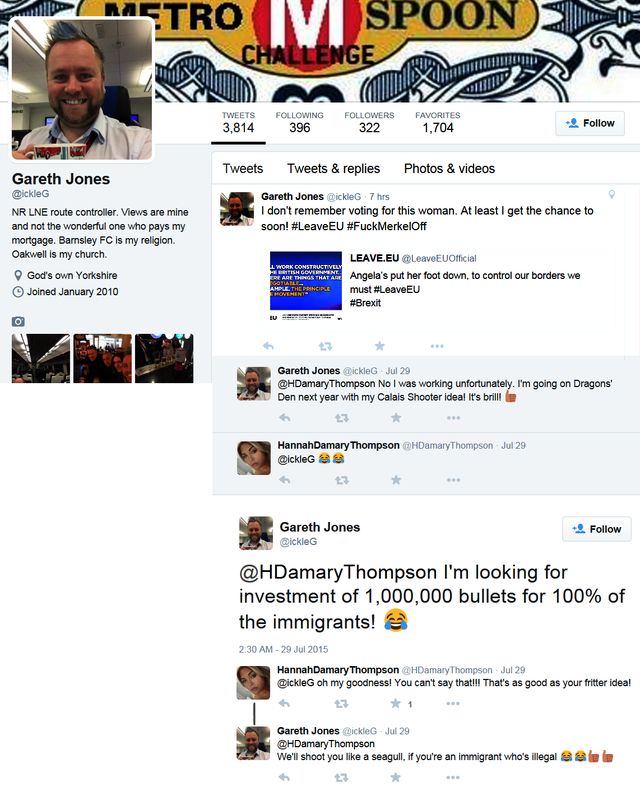 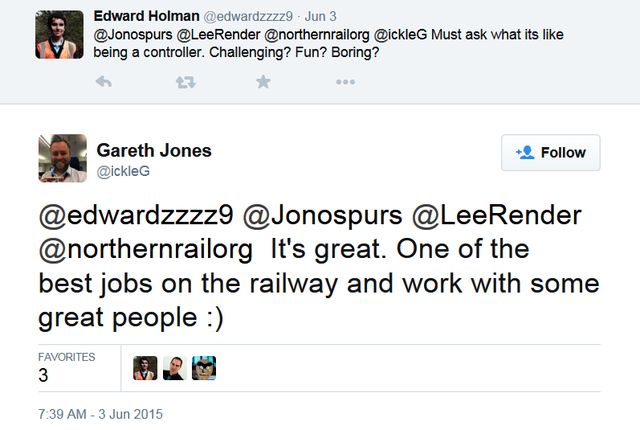 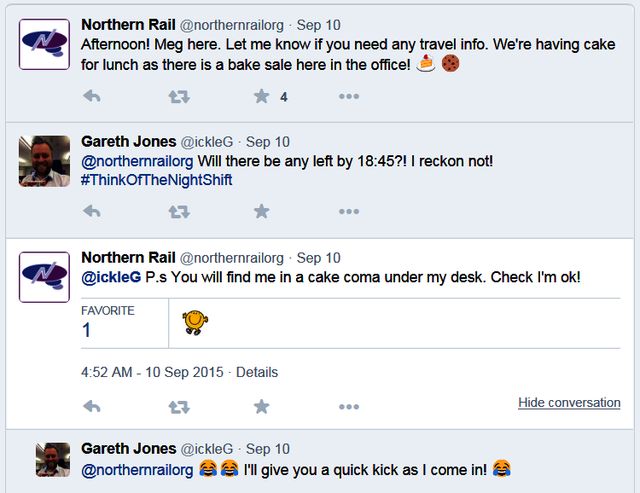 There is a well known saying (true or otherwise) that fascists make the trains run on-time, based upon Mussolini. One thing is for sure, trains were scheduled to transport minorities to death camps, very much in keeping with Northern Rail employee Gareth Jones's horrific fantasies. Throughout Italy, France, Germany, Spain and throughout Northern Europe, trains were scheduled by line controllers to transport Jews, Roma, Serbs, gay people and other minorities to death camps.

Northern Rail should take strong action against Mr Jones for bring their company into disrepute. His Twitter account, refers to his job and employers. Unless the rail company condones racist violence, they must act now to dismiss him from his post.

Worryingly, the @northernrailorg Twitter account seems to be operated from the same office as Gareth Jones works in, and he is on first name terms with the people behind this account. It is hard to believe that his work colleagues will take an expose of their friend and colleague seriously. There needs to be an independent investigation by his employer into this horrifying tweet. People have been fired from other employers for far less controversy than Gareth's longing for refugees to be killed.

Nazi Coward Has Hidden His Tweets

He has now hidden his tweets.

As they do, when they are exposed.

Still, it is too late when there are screenshots.

Well done, Jezmo. Looks like some action will be taken.

When I came across this story via @slatukip, I was disgusted. How can some bastard call for the murder of refugees in Calais and expect to hold onto his job???

He works at Northern Rail HQ in York apparently, but obviously for a third party company.

Let's hope there is a P45 winging its way to him soon!

Must be sweaty bum time!

As someone who works with refugees in the North of England (Manchester), to discover there is some creature so vile that he lusts to go to Calais and gun down refugees fleeing for their lives, makes me angry. It seems that such genocidal attitudes as this scumbag from Barnsley, have been with us for generations since WW2, be it Mosley, Nick Griffin, Stephen Yaxley Lennon, and Paul Golding. Sometimes they try to simmer down the public face of hate to gain supporters or votes, but the toxicity of racism is just the same as it always was - utter loathing and contempt for the outsider, the values of Adolf Hitler and his fictional 'Master Race'.

This tweet about shooting refugees "like pigeons!" has the stench of Auschwitz about it. It is beyond contempt that someone in a management capacity in a public sector industry (the railways) used by refugees, is parroting the bile of Adolf Hitler.

I did believe, stupidly all the same, that the New Millennium would bring with it a sea change in attitudes towards minorities, and these dinosaur attitudes would die, but it seems that thanks to rightwing football hooliganism recycling the same old horrid and vile nationalism, we are back to square one.

Thanks to the EDL, we now have SS flags on the streets, and the NF are now marching again, haven given up street hate for electoral politics much like the BNP, after AFA beat them off the streets a few decades ago.

Never be complacent when it comes to fash. They are always reinventing themselves.