The NWI and their Hitlerite comrades gathered in Preston centre, armed with fireworks and other missiles, ready for confrontation. At one point, they were blatantly lobbing fireworks at shoppers and all passers-by, not just their antifascist opponents, however the most the police did was steer a few horses their way, arresting one man, whilst all the time filming the peaceful antifascist demonstrators. Serious questions need to be asked regards the police's tolerance of a violent, openly neo-nazi gathering in a public place. 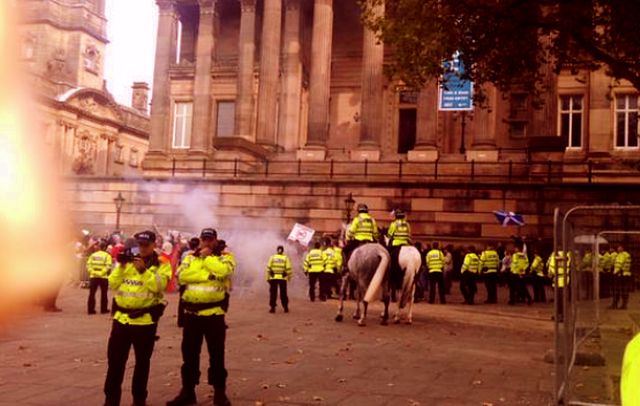 At one point, a little girl was reported to have been struck on the head with a firework, and the numbers were so small (far less than the 100 reported in the local media), that the culprit would have been easy to locate, however the police just stood by idly, fiddling whilst Preston smoked with firework ash.

The crowd were not searched for weapons before the demo started, which was a serious misjudgement. Some of the missiles contained exploding marbles, several of which were reported by observers to have struck an officer on his backside, which might have been the result of the one solitary arrest. One thing is for sure - the neo-nazis were allowed to publically incite racial hatred by waving an SS-banner and make umpteen Hitler salutes.

The SS insignia is illegal in Germany, and should be likewise in the UK. Making the straight-armed salute in public should be a criminal offence under UK law, and should be enforced with jail sentences. At a time when anti-Semitic violence is at an all-time high, open support of National Socialism is making life extremely dangerous for Jewish and other minorities.

Yet the NWI and the NF were doing what they liked without the cops caring less, antifascist observers were being filmed non-stop by the OB.