Oddball Anglo-Saxon nazis Pegida are all set to go out with a bang, sorry, whimper, but one helluva whimper, by exposing their nazi brethren to the wrath of street cleansers par excellence Antifa. At 6pm on Monday the 19th of October, Pegida's Anglo-German National Socialist "Low Command" (as scribbled down on the back of a fag packet and shared on social media), have decided to spread its members thin on the ground, exposing them to the wrath of Antifa by organising lots of microdemos to commence on the same day at the same time without police liaison - SITTING DUCKS! 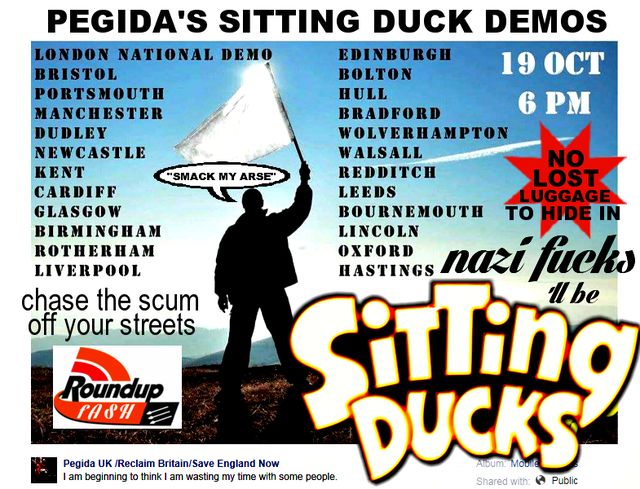 In Liverpool, the fash had Lost Luggage to hide in, but when they pull a stunt as stupid as this, trying to persuade tiny groups of fash to split up into small groups of six or less for each demo, some gatherings - Manchester and Bolton, Dudley and Wolverhampton, Glasgow and Edinburgh, and Leeds and Bradford, within touching distance of each other, they are exposing their members to the perils of street Antifascism like never before.

None of these hairbrained simultaneous demos have been organised with police assistance - in fact the cops don't even know about them - meaning ANTIFA will be left unhindered in the task of clearing Hitler lovers from the drizzly autumn streets.

With a colossal size advantage, outnumbered like never before, clearing the streets of neo-Nazi scumbags will be like shelling the proverbial peas. No sweat will be spent, for instance in Piccadilly chasing away Fatmess when diminutive Diddyboy and Fuhrer fetishist Liam Pinkham are busy in Bolton, chased off with relative ease by locals. Let's hope they have got their best running shoes on...... Pegida UK are the coolest far right false flag op ever......

I would feel a tad sorry for what is going to happen to any flag-waving Blood and Dishonour chumps on Monday 19th of October, if I didn't hate these evil white supremacist bastards to the pit of my stomach.