On Monday 2nd of March 2015, there were demonstrations in over 30 towns and cities around the UK (plus Toronto) against Maximus, the US based health insurance corporation that has taken over the contract from the French IT Company Atos to administer the Work Capability Assessment on behalf of the Department Of Work And Pensions. Atos announced its exit from the contract in early 2014 following an intense period of direct action against the company by groups such as Disabled People Against the Cuts.

The day of action was timed to coincide with the first working day of the new contract, with the spotlight turned on Maximus as well as the continued use of Work Capability Assessments and the life-threatening consequences of the ongoing government attacks on the sick and disabled.

In central London, to the chorus of "David Cameron is a W*****" (YouTube) activists from DPAC hit the streets, taking direct action to block traffic and at one stage bringing traffic to a standstill on Victoria Street in the shadow of Big Ben.

The demonstrations across the UK on the streets were complemented with an online Twitter campaign using the hashtags #Maximarse and #ScrapWCA, the latter trending for a number of hours. This gave the opportunity for those unable (including through sickness and disability) to make it to demonstrations to vent their anger and frustation around the Work Capability Assessment and at a government hell-bent on targeting the sick and disabled.

On the Newswire: Maximarse is more than a farce | Mental Health Resistance Network Statement | Wrexham joins National Day of Protest Against WCA & Maximus 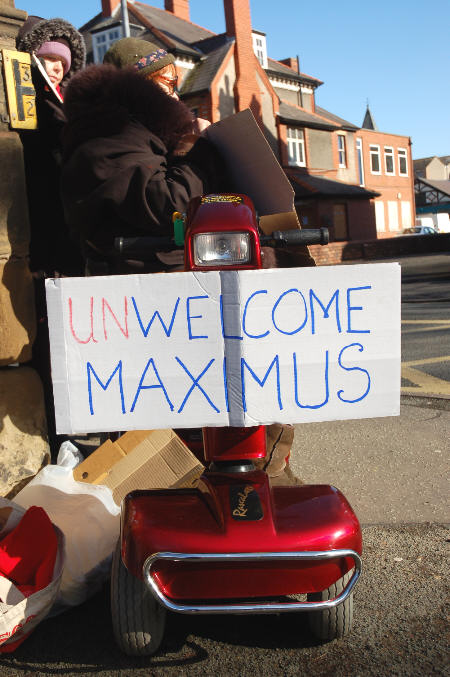 In 2008, the New Labour Government introduced the Work Capability Assessment (WCA), a provision contained in the 2007 Welfare Reform Act which created the foundations for Employment Support Allowance (ESA), replacing the previous Incapacity Benefit. WCAs were mostly carried out by Atos, the French IT company and were soon shown to be wholly inadequate and unfit for purpose. The criteria used to assess 'work capability' ignore many of the key factors that prevent people from seeking, aquiring or holding down employment, especially those with mental health problems.

While Atos carried out the government's plans of demonising disabled people and cashed a £500 million cheque for their efforts, many people with serious and terminal illnesses were deemed "fit for work", in some cases dying shortly afterwards. The wholesale inadequacy of the tests was exposed by the number of decisions to end claimants' sickness benefit that were overturned, some 42% of appeals being allowed. Not all cases reached appeal as many simply lost the will to fight when faced with the time and anguish of waiting for an appeal to be heard in front an independent tribunal. At some stages there were backlogs so long that claimants were waiting over a year for their appeal to be heard. Suicides among those denied benefits are well documented, for example by groups like Black Triangle.

In 2011, the Tory/Lib Dem Coalition used this legislation to reassess over 2.5 million people. In some cases people were not even notified of the change until the moment they attempted to withdraw their benefit from the bank, only then realising it had been stopped.

The Maximus demonstrations are a follow-on from the successful campaign waged against Atos last year. On 19th of February 2014 various groups held a national day of action against Atos and the Work Capability Assessment. Over 140 demonstrations were held outside Atos assessment centres throughout the country, including Archway Nottingham and Wrexham.

Atos were feeling the pressure from protest groups, church groups and professional organisations such as the British Medical Association. It was therefore no surprise that Atos negotiated an early exit from their contract. Demonstrations against Atos had been happening on an ongoing basis dating back to at least 2011.

Like Atos before it, Maximus can expect a concerted campaign by and in solidarity with those affected by Work Capability Assessments and the government policy of attacking the sick and disabled. It's a matter of life and death. Monday's day of action was only the start and Maximus was clearly rattled: after the #Maximarse hashtag was widely used on Twitter, it was reported that Maximus had bought the domain name maximarse.com not, presumably, with a view to setting up its own Maximarse web presence!