Last night Sheffield Autonomous Students, Sheffield RevSoc and the Sheffield campaign for a Living Wage Now united to occupy the Richard Robert’s Building at University of Sheffield in solidarity with todays University workers strike. Following are some photos of the march through Sheffield City Centre and the occupation from the afternoon of 31st October 2013. 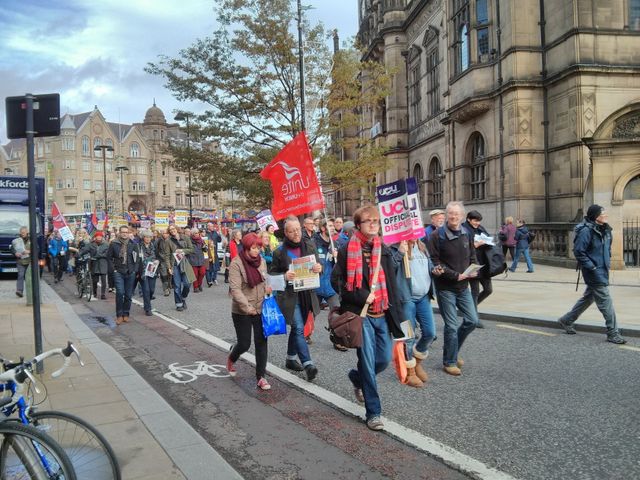 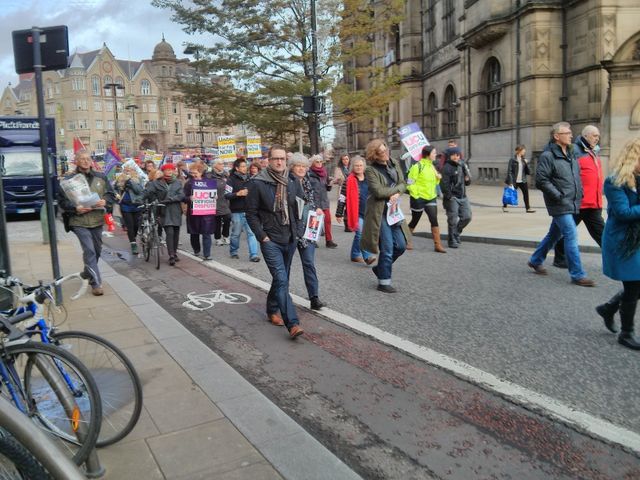 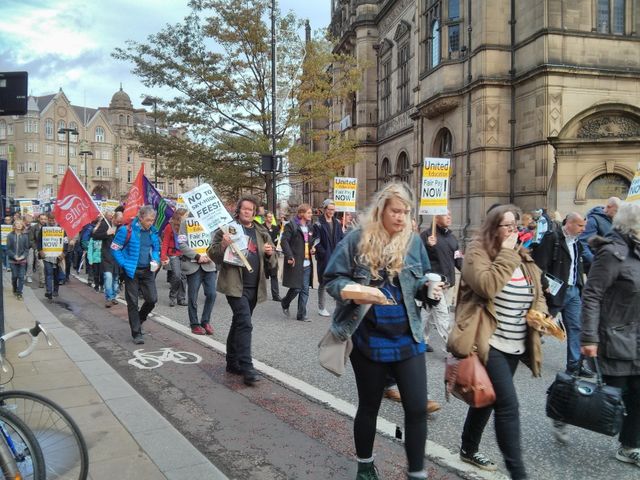 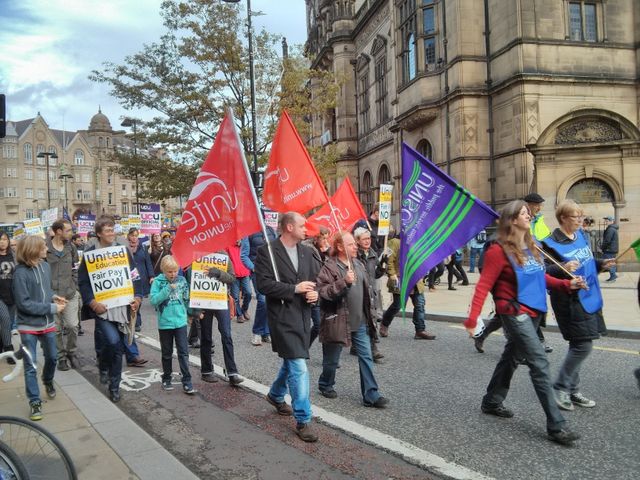 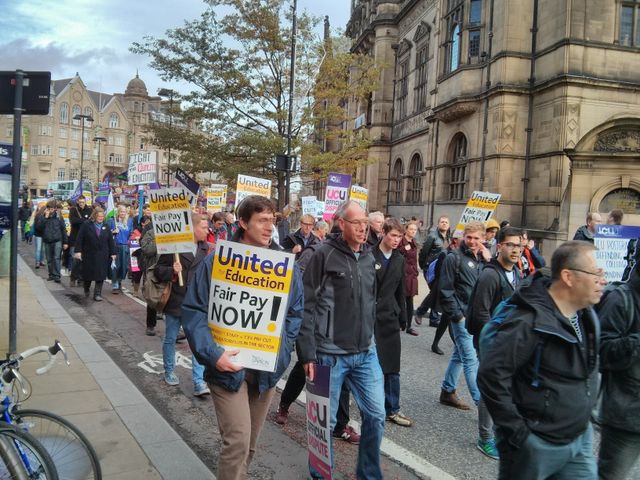 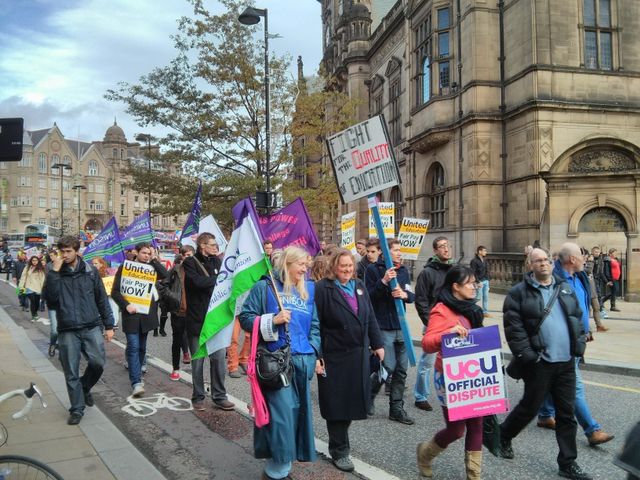 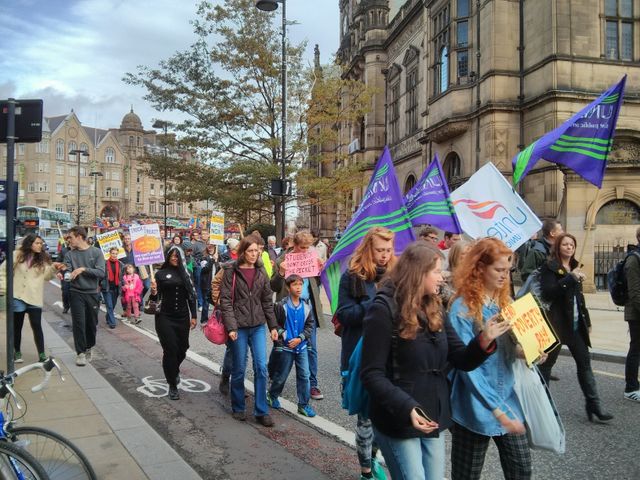 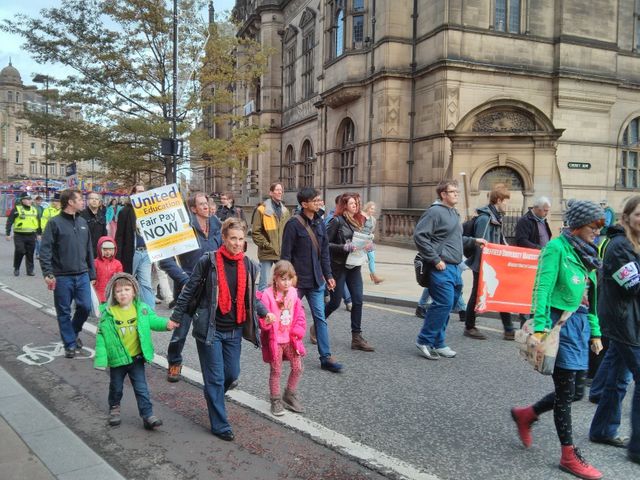 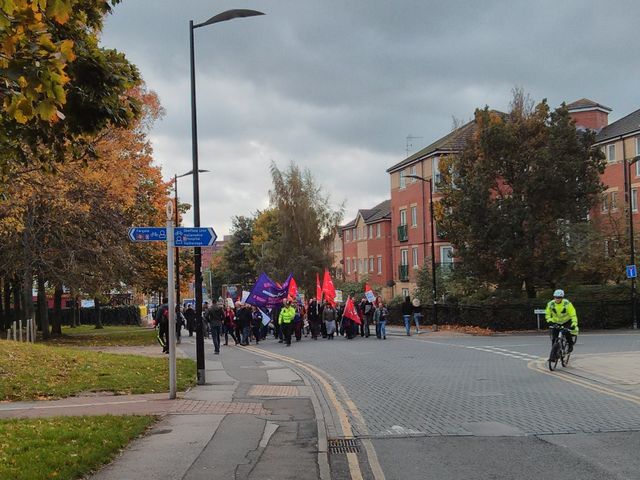 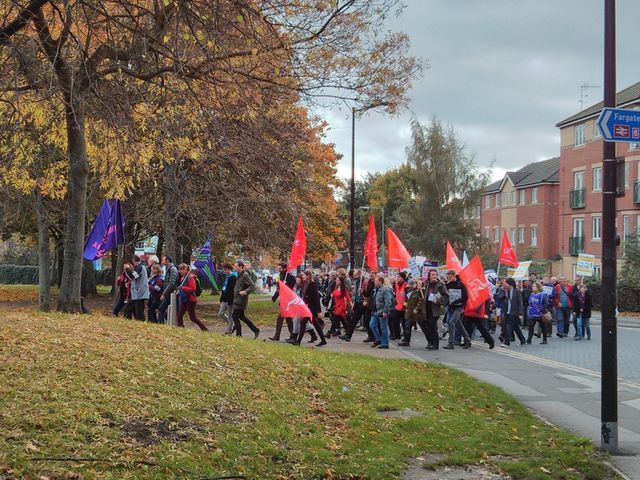 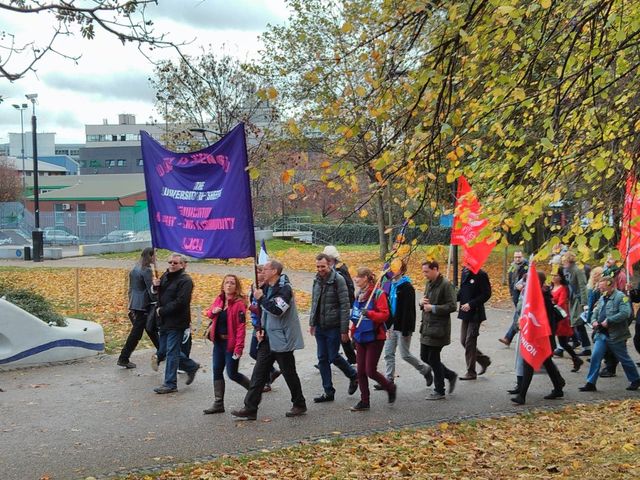 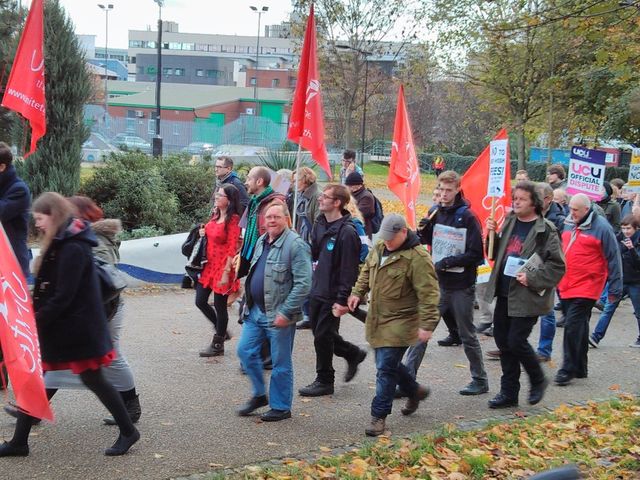 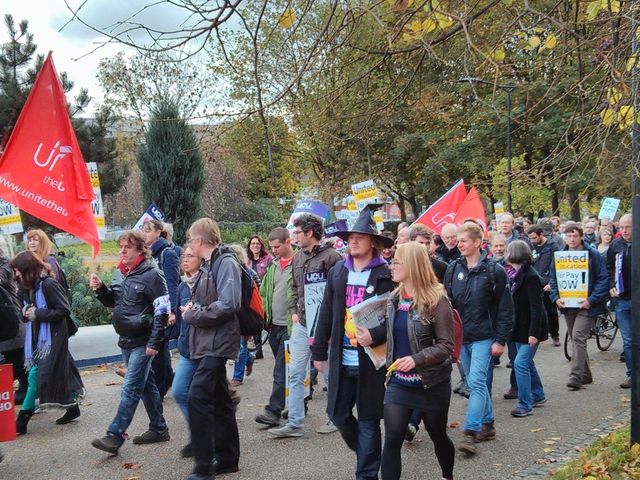 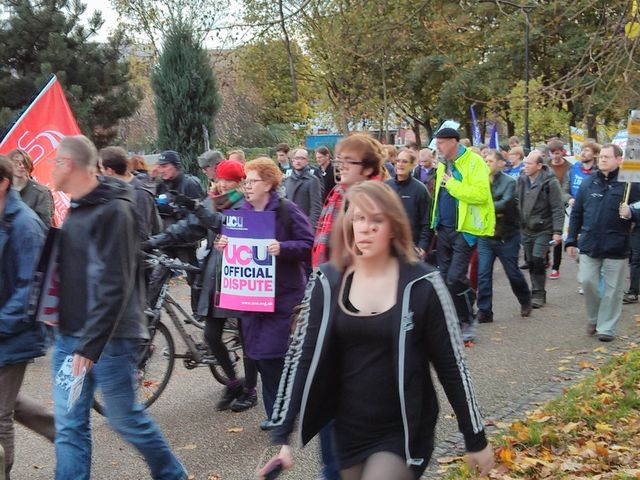 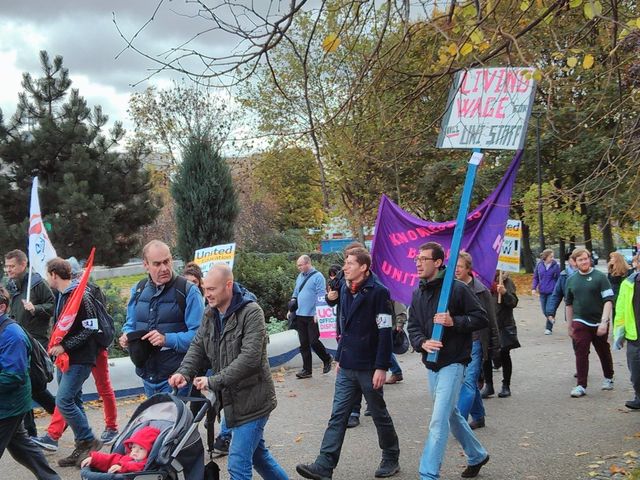 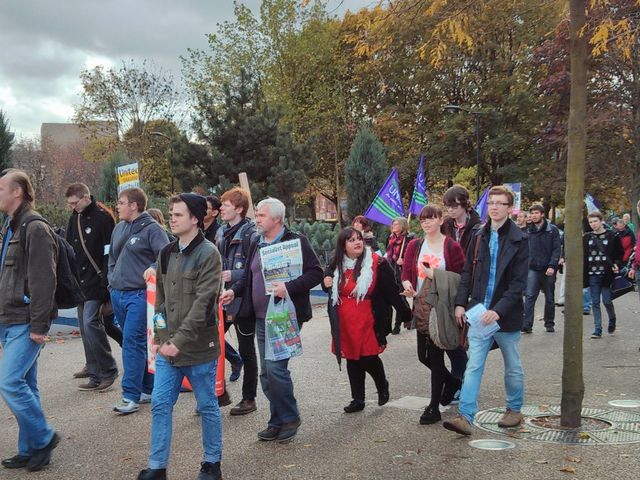 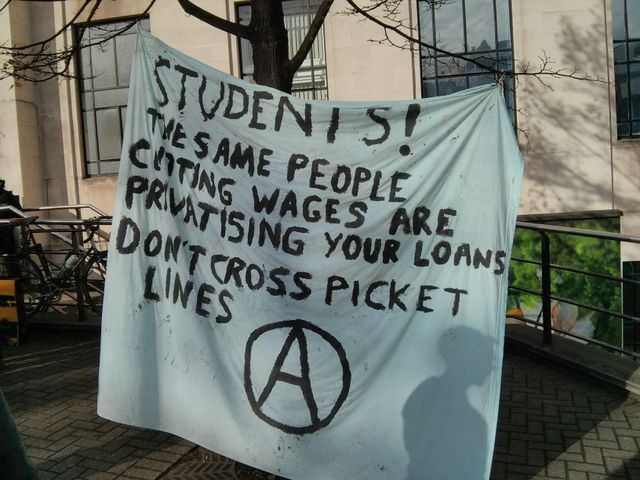 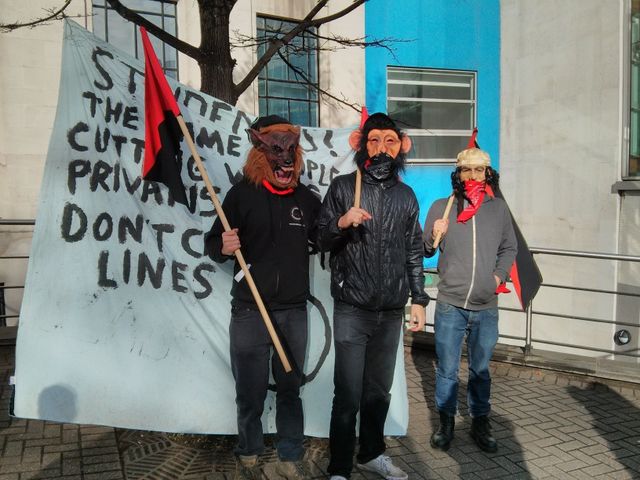 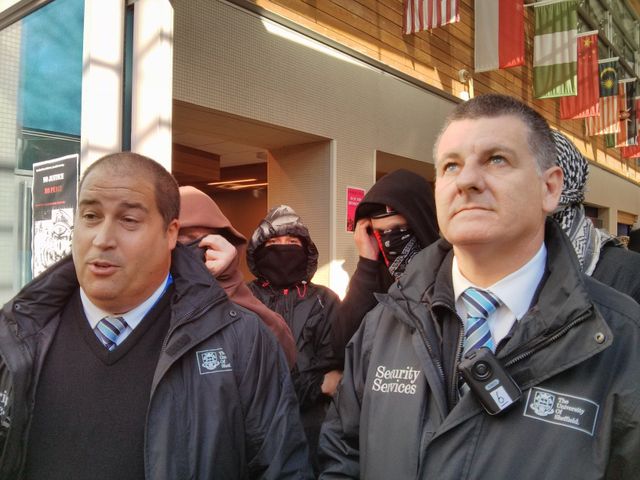 No entry to people who are not staff or students

The following texts have been taken from The University of Sheffield's Anarchist Collective web site:

At around 7pm last night, Sheffield Autonomous Students, Sheffield RevSoc and the Sheffield campaign for a Living Wage Now united to occupy the Richard Robert’s Building at University of Sheffield. Our plan was and remains to support striking staff members at the university, prevent strike breaking and show other students that we can unite and support workers who face attacks from the same management that made the decision to implement £9,000 fees whilst making cuts to academic funding. We entered easily, with no resistance from security or management. We hung banners so that people outside knew what was happening and waited for any rooms being used to empty. We quickly settled and security agreed that we could stay if some security guards stayed with us. We held a consensus meeting, discussing rumours that management were going to come to speak to us (they never did) and the support we’d had from people who work in Higher Education. We also passed a safer spaces policy as a group, so that everyone could relax in the occupation and feel supported in raising issues in the event of encountering sexist, racist, ableist or LGBTphobic behaviour.

Different groups had meetings to discuss how they were going to approach the occupation and strike. We made barricades to help prevent strike breaking and so that we could hold the building for the duration of the strike. We formed different groups, including a women’s group who convened together and decided to stick together throughout the occupation. At midnight, the members of the security team who were striking left.

After a night of little or no sleep, we got up early and positioned ourselves so that we could confront strikebreakers and also explain to those who were interested what was happening. RevSoc and Living Wage Now decided to leave in the morning to join pickets. Some autonomous students went outside to help picketers to explain to students and other staff what was happening in the university, both with regards to pay cuts and the refusal to pay a Living Wage

http://www.bbc.co.uk/news/business-20204594 . Some students did turn up for lectures, but left when we told them that the building was closed for business and that there is a strike on. Morale remained high throughout the day and some students came to visit us, curious about our ideas and the occupation. Image

So far, no lectures have been held and we are planning to leave soon. We are happy with how the occupation has gone and are confident that this is the start of an active, positive and radical year in Sheffield.

We as Sheffield Autonomous Students have occupied the Richard Roberts Building alongside other radical groups in support of striking staff at our university and other higher education institutions. We have done this as part of a nationwide action, co-ordinated with other anarchist student groups through the Autonomist Student Network.

This action is to help to maximise the effectiveness of the strike by preventing strike breaking in the Richard Roberts Building. We are done making demands on a university management that ignores its students and staff, and serves the interest of capital whilst it poisons education.

From now on if the university attacks students or staff it should expect retaliation.