More trouble from the Ministry of Defence police at NSA Menwith Hill, near Harrogate, North Yorkshire...

Please consider coming to the Tuesday pm demonstration at Menwith Hill – held each week from 6-8 pm.

This Saturday, you can join the growing movement in the US calling on the government to get out of our private lives, at the biggest protest yet against NSA spying. But we could do this on Tuesday next week: STOP SPYING ON US – please bring a sign. 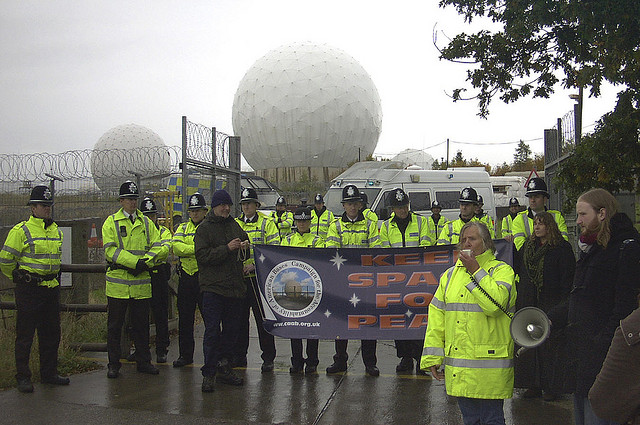 The Tuesday pm weekly demonstration at NSA Menwith Hill had hardly started when I was suddenly arrested by PC Ashton (Ministry of Defence Police) for allegedly breaching a notice that had been purportedly given on 11 September (s.69 "aggravated trespass" Criminal Justice and Public Order Act 1994). I was told that I was to be searched at the scene and it would be done even though this must be done by a female officer.

I declined to be searched by a male officer (apparently no female officer available) and was told that they would use force. I told them what was in my pockets and told I had to open my coat but they insisted (Alan Davidson Sergeant, PC Ashton and another officer) that this is what they would do. Apparently they can do this but only under exceptional circumstances. I said that I would compromise and show them what was in one pocket and told them what was in the other. Even though against the principle of male officers searching women detainees and unlawful force being threatened I thought it was better to compromise rather than force.). I was taken to Harrogate Police station and eventually charged with alleged breach of s.69 notice.

Bail conditions were imposed not enter MOD land at NSA Menwith Hill. I am bailed to appear at Harrogate Magistrates' Court on 12 November at 10 am. I was never searched while in custody and released quite soon. I very much hope this case comes to court.

Brigid-Mary (who regularly comes to the Tuesday pm demonstration now) said when I saw her to collect my car from NSA Menwith Hill, that she had immediately crossed the yellow line after I was taken off and that she had stopped nearly every car holding up her PEACE flag in front of each car, for a short while. There was no objection to this by the MDP. There should not have been - this is what we did last week with very little problem and have been doing for the past 18 months. Thank you so much to Martin Schweiger who kindly collected me from the police station and took me back to NSA Menwith Hill to collect my car....and to Brigid-Mary who continued the struggle of the 'yellow line' and was so supportive.

The issue of the yellow line caused a lot of conflict for over 8 years with many arrests/charges etc etc. Then the policing suddenly change about 18 months ago after a long and difficult struggle. Since then there have been very few problems. However when the Syrian crisis erupted we were told to go back behind the yellow line. As this line has been in legal contention for many years we picked up the struggle again and each week some of us have crossed it. It has become increasingly nasty resulting in the arrest this week.

Please consider coming to the Tuesday pm demonstration – held each week from 6-8 pm. This Saturday, you can join the growing movement in the US calling on the government to get out of our private lives, at the biggest protest yet against NSA spying. But we could do this on Tuesday next week: STOP SPYING ON US – please bring a sign.

CAMPAIGN FOR THE ACCOUNTABILITY OF AMERICAN BASES – CAAB