Dignity not destitution! Support the right to asylum

This Saturday 29th June will see protests across the country by asylum seekers and supporters calling for 'Dignity not Destitution'.

In June 2012, 250 asylum seekers and supporters marched through Bristol to tell people our problems and to demand Dignity For Asylum Seekers [ Report | Press Release ]. This gave us more confidence to speak out. After last year's march we campaigned to get Bristol City Council to support us. We are pleased to say that in January they voted overwhelmingly to support us and condemn the government’s policy on forced destitution. Now, we are joining together with groups around the country to take action on the same day to say that forced destitution is wrong. Read the full article for details of events around the country. 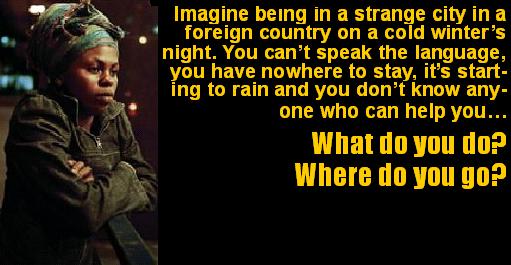 Scroll down for details of actions taking place in Bradford, Leeds, Sheffield, Glasgow, Bristol and Manchester.

We, asylum seekers were forced to run from our countries. Our lives were at risk. We left our homes and families. We came here to find safety.  But for many of us, our pleas for sanctuary were wrongly rejected by the Home Office.

The little support we did receive, like temporary accommodation and food vouchers, were stopped. We are not allowed to work yet we can't receive any benefits. Going home is not an option. We are stuck here like this for years.

All this makes us feel alone, depressed, isolated from society and there are even some people who have taken their own lives because of this situation. And we are then blamed by the government and media for lots of problems that we did not cause. A human being should not have to endure this.

Asylum seekers come here for safety but 90 per cent of them will have their asylum claims initially refused by the UK Border Agency. The UKBA’s asylum process is seriously flawed. Asylum seekers can be reluctant to reveal personal details to officials about how they’ve been attacked, raped or tortured. Many are scared to give information about their sexuality in case it is discovered by other people. Worried that translators belong to rival groups or will leak information, many hold back crucial information. Often they’ve not had time to collect evidence to show they’re telling the truth.

So most asylum seekers are not believed by immigration officials who operate in a cynical, canteen-culture of disbelief and racism against people they’re supposed to be helping.

Many asylum seekers make two or three asylum applications before getting a positive decision. While they wait for new evidence or for lawyers to prepare judicial reviews, asylum seekers often face destitution. Instead of safety, many asylum seekers face sleeping rough and becoming dependent on the help of friends and charities to survive.

Refused asylum seekers are left to live without any money, unable to access anything but emergency medical treatment, sleeping rough or couch-surfing until they can get a fresh asylum claim lodged. They become vulnerable to exploitation and face working illegally and crime to survive.

Destitution is a deliberate policy used by the UK Border Agency to force asylum seekers to give up their asylum claims and return ‘voluntarily’ to their countries of origin. It is a brutal, immoral policy that goes against basic human rights.

Enough is enough. Join the protests. Dignity not Destitution!

We Want To Contribute – End Destitution of Asylum Seekers

STAND UP FOR THE RIGHT TO ASYLUM!

JUSTICE, FREEDOM AND DIGNITY FOR ALL

Let us work! Stop using us as scapegoats!
Rally & music, any asylum seekers/refugees that want to share their experiences or state their demands are warmly invited to speak.
See also Leeds Dignity for Asylum Seekers | facebook event

11 am, Ellesmere Green (at the top of Spital Hill)

We will walk via the Wicker to arrive at 12.30 pm at City Hall, for a gathering with speakers.
At 1.00 pm we walk via the Moor to St Mary’s Bramall Lane (where refreshments and toilets will be available).
This march is organised by refugee and asylum community groups in Sheffield and we would encourage everyone to join us to show solidarity.
Organised by SYMAAG South Yorkshire Migration and Asylum Action Group

STAND UP FOR DIGNITY
Stop Destitution! Give us the Right to Work! Housing is a Human Right!
Stand Up for the right to Asylum
JUSTICE, FREEDOM & DIGNITY for ALL!
Rally & Music
Supported by the Glasgow Destitution Network
See also Unity Centre Glasgow

Marching to Castle Park, with banners, masks and a giant scapegoat, stopping on the way to talk about education, health, signing at the police station, the right to work and where we go from here in our campaign.
See also Asylum Seekers in Bristol blog | facebook event