Join the annual Independence FROM America demonstration at NSA Menwith Hill, N. Yorkshire organised by the Campaign for the Accountability of American Bases (CAAB).

Speakers to include Salma Yaqoob, Andy Worthington, Martin Wainwright, Mizan the Poet. Food provided by the 1 in 12 cafe 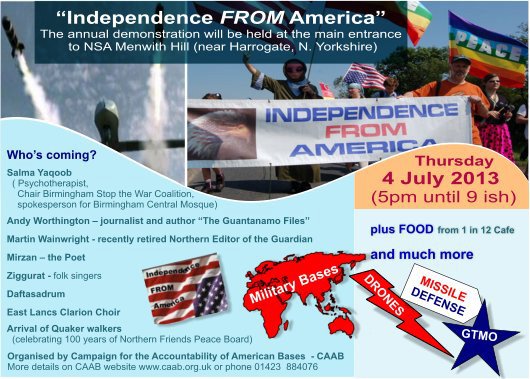 NSA Menwith Hill is the largest US intelligence gathering and surveillance base outside the US. It is secret, unaccountable and out of control of the UK government. Not only run by the National Security Agency of America, there is a contingent of GCHQ personnel present at this base, and it operates the ECHELON system. The base spies on you. Other very concerning roles are that it is involved with intelligence-led warfare eg DRONES and is crucially connected with US Missile Defense and much more. PLEASE COME and especially come from the capital city!

NSA Menwith Hill is one of the key hubs involved in the NSA back door spying operations revealed by whistleblower Edward Snowden.

"The NSA specifically targets the communications of everyone. It ingests them by default... While they may be intending to target someone associated with a foreign government or someone they suspect of terrorism, they're collecting your communications to do so. Any analyst at any time can target anyone... I sitting at my desk certainly had the authorities to wire tap anyone, from you or your accountant to a federal judge to even the President..."

"Even if you're not doing anything wrong, you're being watched and recorded and the storage capability of these systems increases every year consistently by orders of magnitude to where it's getting to the point you don't have to have done anything wrong, you simply have to eventually fall under suspicion from somebody, even by a wrong call, and then they can use this system to go back in time and scrutinise every decision you've ever made, every friend you've ever discussed something with, and attack you on that basis to sort of derive suspicion from an innocent life and paint anyone in the context of a wrongdoer."

“I can’t allow the US government to destroy privacy and basic liberties.”

“In my estimation, there has not been in American history a more important leak
than Edward Snowden’s release of National Security Agency material – and that includes
the Pentagon Papers, for which I was responsible 40 years ago. Snowden’s whistle blowing
gives us the possibility to roll back a key part of what has amounted to an exclusive coup against
the American constitution...the so-called intelligence community has become the United Stasi
of America”.