Audio from the Sheffield Anarchist Bookfair 2013

Attached are audio recordings from 8 of the talks at the Sheffield Anarchist Bookfair which was held in the Showroom and Workstation on 11th May 2013, see also the photos of the stalls.

The Luddites, the crisis and the need for a new politics of technology - mp3 41M

Anarchism, Marxism and the state: the real divide amongst revolutionaries? - mp3 57M 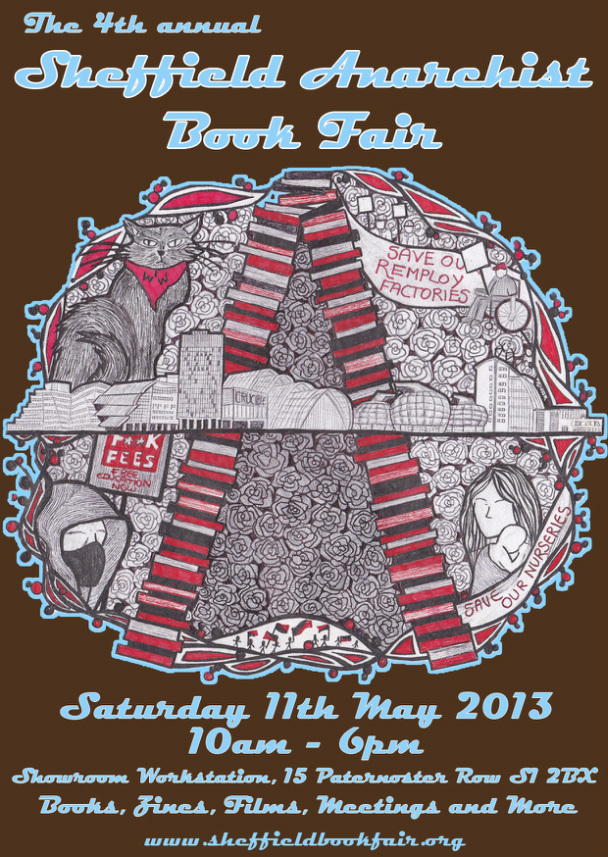 Following are the titles and descriptions of the talks from the programme:

The Luddites, the crisis and the need for a new politics of technology - Corporate Watch

From 1811-1816, textile workers in the North of England rose up against machines that were destroying their livelihoods, and against the whole industrial capitalist system. 200 years of technocratic capitalism has brought us to the to the brink of an environmental disaster, and class exploitation still ruins the lives of the majority of the world’s people: the choice between libertarian socialism and barbarism has never been more stark. Rather than face the transition to sustainability and economic justice, ruling elites are trying to maintain business as usual, through technofixes such as geoengineering and synthetic biology. This workshop will discuss new efforts to resist these technofixes, and the need for a new luddite politics of technology.

We don’t have much money and no paid officials. We don’t sell insurance or credit cards. But we are fighting and winning and we want more. We want the economy run for the benefit of everybody, not a handful of executives on unimaginable pay. Hear about the IWW across the world, its history, and principles and where we are at today. Hear from the Sheffield Branch of the IWW and how we grew from one campaign into an organised group of people taking action to change their own varied workplaces for the better, and gaining international support. Find out about our members’ own experiences using direct action and how direct democracy is working in ‘the Union for all workers’.

The Idea of the Commune - Nick Heath, Anarchist Federation

A presentation covering the basic principles of anarchist communism as shown through two key historical episodes: the life of Bakunin and the Makhnovist uprising in Ukraine. The presentation will bring these ideas up to the contemporary period to discuss contemporary debates between organisationalist and so-called lifestyle anarchism.

This presentation aims to debunk the myths that anarchism is a romatic, impulsive or otherwise anti-intellectual philosophy. The lecture will introduce key theoretical concepts - specifism, organisational dualism, the social and political level and social insertion - that help to inform anarchist communist practice. These ideas will be siutated in the original experiences of key proponents such as Bakunin and Malatesta but argued to be key tools for anarchists today to build popular, anti-capitalist movements.

In January 2013 the Feminist Library (London) hosted a weekend event to launch a new initiative entitled Womens’ Studies Without Walls, which is continuing in the form of a series of evening events at the library. The reason for initiating Womens’ Studies Without Walls (WSWW) was a feeling that the gap between academics studying feminist struggle and activists involved in everyday grassroots struggle has grown so wide that we cannot easily find places to talk together and, in some cases, cannot even understand one another.

We would like to hold a meeting with anyone who is interested in talking about how to develop WSWW. We can tell you how we organised, answer questions people may have, and facilitate a discussion about whether there is a need and/or an interest in organising WSWW outside of London. If there is sufficient interest among the people present, we can actually start some grassroots planning during the meeting.

Anarchism, Marxism and the state: the real divide amongst revolutionaries? - The Commune & Communist Workers Organisation

Marxists and anarchists have always shared the view that the antithesis to capitalism is a classless, stateless society. What they have not shared is a clear outline of how this might come about. After the statist cul de sacs of social democracy, Stalinism and Trotskyism many Marxists now recognise that the issue is not about replacing the state but destroying it. After the failure of the anarchists in Spain many anarchists recognise that revolution from below cannot just be a nice idea but has to have a deeper material basis. With capitalism now in obvious crisis is this not the time for a more fruitful exchange on revolution and the state than has been possible in the past? All welcome.

A facilitated discussion to share experiences and information from various local groups organising against the policies of austerity such as those fighting the bedroom tax and benefit cap, UK Uncut, and groups seeking to save local services threatened with closure. How do we increase the effectiveness of responses to the state’s austerity program? All welcome.

Bakunin, Marx and the state

The Commune introduction to a meeting on Anarchism, Marxism and the State, at the Sheffield Anarchist Bookfair 11th May 2013, by Barry Biddulph.

In the 1870′s, Bakunin in Marxism and the State, argued that the divide between Marxists and Anarchists was this: Marxists stood for the Peoples State (workers state) and Anarchists aimed for the destruction of the state. This was not a direct polemic with the views of Marx in the 1870′s. It was an indirect attack on Marx as the pope of German Social Democracy. Therefore, when Lassalle advocated the people’s state this reflected the views of Marx.

Bakunin went all the way back to 1848, and the Communist Manifesto, where we find the following state socialist position: “the proletariat will use its political supremacy to wrest, by degree, all capital from the bourgeoisie, to centralise all instruments of production in the hands of the state, i.e. the proletariat organised as a ruling class”. (1) But this was described as outdated by Marx in 1872, “One thing especially was proved by the commune, that the working class cannot simply lay hold of ready-made state machinery and wield it for its own purpose”. (2)

We have to remember the historical context of 1848. This was at the beginning of modern industrial capitalism and the working class. Industrial Capitalism had not rolled out across Europe, let alone the world. Marx developed his understanding of the nature of capitalism and class struggle as history moved on. State socialism to an extent reflected the development of class struggle at the time. The Chartists demanded the democratisation of the state with annual parliaments.

Bakunin criticised Marx for being too optimistic about the spread and development of capitalism. He did have a point. In 1848 Marx did tend to see capitalism rolling reactionary, backward elements flat. But as we now know backward, reactionary forces embraced capitalism faced with revolt from below and modernised from the top down using the state. National unification in Germany in the 19th century took on a reactionary form under Bismark. Later, Marx’s views became more open-ended, or more multilinear, rather than unilinear.

The point is, Marx generalised from class struggle and developed his understanding of capitalism. Bakunin, although lacking a developed social theory, did have an insight in 1848 that revolution could not be advanced through the state. Later Marx studied events in France and in, The Eighteenth Brumaire of Louis Bonaparte, noted the growing power of the State which in specific circumstances could rise above classes. But it was the Paris Commune in 1871 which drove the point home. It was a proletarian revolution against the state itself. The state might have predated capitalism, but it embodied the power of capital over labour. The alternative was the self-government of the producers.

In the 1870′s Marx wrote a critique of Social Democracy’s Gotha programme. He made the mistake of keeping the criticism of the leaders of Social Democracy private, not making it public until 1890. Marx rubbished Lassalle’s concept of the people’s state. But he did step back from the clarity and boldness of his writing on the Paris Commune. There are some ambiguous statements. For example, the democratic republic is not the final aim, but the site of the final struggle. This echoes the notes of Marx on Bakunin and the State, that the over throw of the old society is on the basis of the old society. Not the basis of the old state, but the clarity is not there.

Lenin in his, State and Revolution in 1917, did take up the theme of smashing the state, but added that the capitalist state would be replaced by a workers state, a political regime which would represent the Dictatorship of the Proletariat. In this he followed Plekhanov rather than Marx. The Dictatorship of the Proletariat became a government, not the social domination of society by the working class. The State and Revolution had no influence on Bolshevism before or after 1917. Following the Russian Revolution, the Bolsheviks rooted themselves in government and the State, rather than the Soviets and mass organisations from below. In so far as the state was damaged in 1917, they reconstructed it around their party.

The lesson of the Russian Revolution for Victor Serge, who had been an Anarchist and a Bolshevik, was that Bolshevism lacked the spirit of liberty. This echoed the views of Lenin’s left critics within the Bolshevik party that the Bolshevik government lacked confidence in the creativity and initiative of the masses. In this sense, we can agree with the sentiments of Bakunin when he wrote: “liberty can only be created by liberty, by an insurrection of all the people and the voluntary organisation of the workers from below upward”. (3)