Jeff Marsh "Comes Out" On Twitter As Being Gay #edl #lgbt

Perhaps the most surprising tweet of them all, was this afternoon when violent racist ex-soccer hooligan "Joe Casuals" (Jeff Marsh to you or I) openly came out as "gay". This is the sadistic racist former EDL thug who enjoys slashing Manchester United fans with sharp knives for fun, and many of his mates do stiff arm nazi salutes and use the hashtag #14/88, and now he has supposedly come out of the closet, putting himself at risk of homophobia from his nazi mates. 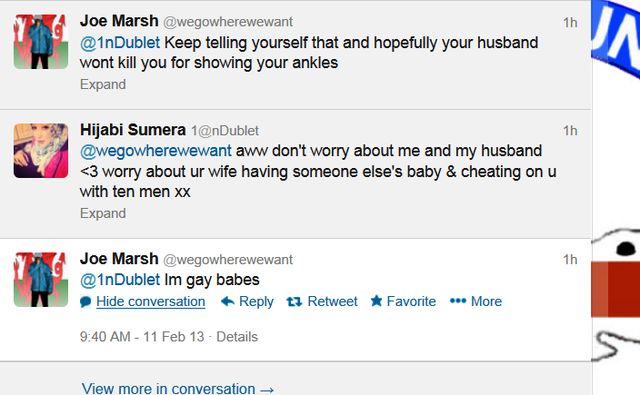 Is Jeff Marsh telling the truth, or is this a lie to hopefully silence rumours of his alledged attraction towards his underage troop of teenage girls? This is up for anti-fascists, his former WDL mates, and the rest of the internet to decide.

What is for sure, he is a nobody, and he knows that any lie told on his Twitter account is all publicity for him.

But what sort of publicity? Surely coming out openly as gay, would (if true), put his life in danger with the homophobic boneheads whose friendship he likes to court on the internet.

Casuals United have now (publicised on EDL News and Still Laughing At The EDL - Facebook), signed up as supporters of "England's Goilden Dawn" better known as Golden Showers, who are unreconstructed nazis.

If the Golden Shower lot, or the NWI for that matter, let alone the BNP, BDP or BPP has their way, lesbians and gay people would be sent quickly to the gas chambers.