Communities won't take the closure of nurseries and childrens centres.

Around 100 parents and children under 5 arrived from Tinsley Green children's centre. Another 50 joined the protest from Darnall Community Nursery.

In total at least 250 protested outside Sheffield Town Hall against the Labour council's planned slashing of Sure Start children's centres and nurseries.

The council is aiming to cut £3.5m from these centres. Currently there are 36 centres, all Ofsted registered and providing childcare, health, education and family support. All would be downgraded.

Instead the aim is to have 17 children's centre 'areas', with each area having only one nursery. The council calls its proposals a 'redesign' and incredibly has claimed that the service will improve, reaching more children.

Yet, at the same time, it blames the government for forcing the cuts on it - thereby implying that the service will suffer.

19 of the 36 centres have been earmarked for closure. Five of the seven centres that received an 'outstanding' grade from Ofsted last year are amongst those under threat.

Many nursery workers and parents have been told that their centres will be closed by March 2013 at the latest.

Yet the council is saying that there will be no closures. What it means is that it will use all the sites for something - it's just that 19 of them won't have childcare services! 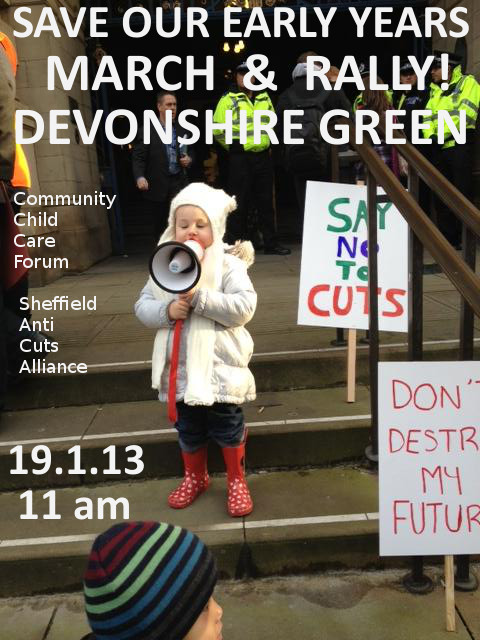 So it's no surprise that parents don't agree that the plans represent 'a similar but more flexible service'.

Parents on low incomes will not be able to afford the fees charged by private nurseries. Also, such nurseries are absent from low income areas as they don't have enough better-paid parents to make them profitable.

The anger at the proposals was clearly shown at the protest with loud chanting and an array of homemade placards.

Parents and workers signing the petitions on our Socialist Party stall were outraged at what was happening.

200 parents and children then packed into the Town Hall to attend the council cabinet meeting considering the issue - which had to be moved to another room to fit everyone in.

But she did not leave it with the councillors - instead the campaign is to continue with the petition, with the aim of reaching 5,000 signatures and triggering a debate at the full council meeting.

The councillors were heckled with 'You should cut your wages' and 'We don't accept these cuts'. But they provisionally approved plans to cut £6.8 million from the early years' budgets including the £3.5 million from childcare centres.

They have confirmed that 50 jobs at the children's centres will be lost - though staff at the centres say that 150 are under threat.

The plans were approved subject to consultation. This is interesting as previously the council has claimed that 700 people had already been consulted whereas the nursery workers, parents and trade unions pointed out that there had been no such consultation.

Labour leader Julie Dore has called the Coalition's planned future cuts "the end of the council as we know it" - yet Labour still plans to pass on these cuts.

We must not let them. Workers, their trade unions and communities must fight for every job and every service.

The Community Childcare Forum have called a march and demonstration for Saturday the 19th of January. Assemble at Devonshire Green at 11.00 to march to the Town Hall.
The Demonstration has been called in response to the brutal cuts which Sheffield City Council are proposing to inflict upon our communities who are already suffering from the Government's austerity measures.

Many working mums depend on these service and will be forced out of work with no childcare provision in their area.

Many unemployed mums depend on these services whilst they look for work or retrain.

Research Shows that quality support and education in a child's early years improves their outcomes and life chances. Universal services, such as nurseries, build trusting relationships with vulnerable families and often prevent them having to be referred in to stigmatising services that label families as failing.
If the council imposes these cuts on working families and the most vulnerable Sheffield will feel the impact for generations.

So lets stand up and say NO to cuts in these services.

And use the money saved to provide your own community services.

It is no less than legalised fraud and embezzlement... theft on a grand scale.
These criminals pay little or no tax.

How much longer are the people going to tolerate this state of affairs?

Yes they will do what they want to do - you obviously have a short memory like most on this brain dead island.

The Labour Stazi state closed down loads of nurseries, many community run. and replaced them with Big Brother Sure Start Centres as part of a life-time monitoring / control project. e.g. this initially included the plan to DNA every kid.

liberalism is just a polite word for facism