Early Monday morning around 30 activists shut down West Burton power station before climbing the chimneys to set up camp and occupy the flues in order to prevent it being switched on again. This action is to highlight the senselessness of a dash for gas in light of climate change and fuel poverty. 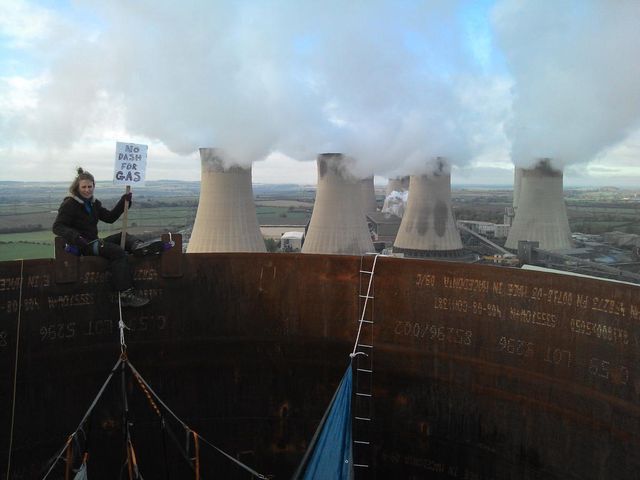 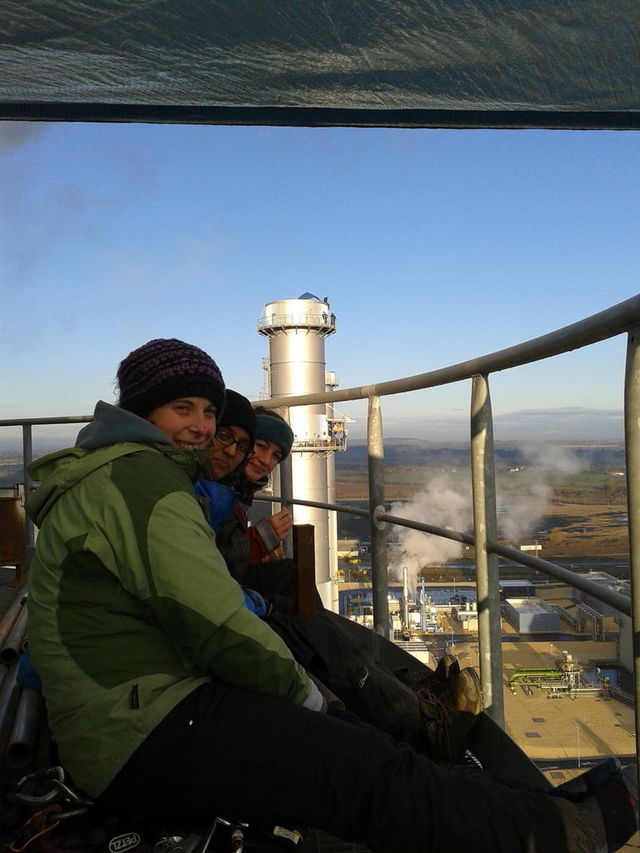 The occupation fires the starting gun on a huge nationwide battle over Britain’s energy future, with activists determined to stop government plans for a new dash for gas. They are calling instead for a high-tech carbon-free electricity system.

The night-time incursion was launched at 2am when the raiders got through the security fence. Under cover of darkness fifteen of them crossed the expanse to the chimneys then split into two groups and began the 300ft climb to the top. They are now building barricades to defend their positions. They have enough supplies with them to last at least a week and say they’re in it for the long haul.

The plant was shut down shortly after the campaigners began the ascent. A further team remained on the ground to liaise with the plant’s managers. Before launching the protest they engaged in extensive consultation with an expert engineer and each underwent intensive safety training.

West Burton power station in Nottinghamshire is being targeted because it’s one of the first in a new generation of highly polluting gas plants planned for the UK. The Coalition Government recently announced it intends to give the green light to as many as 20 new gas plants – a move that would crash Britain’s carbon targets, contribute to the climate crisis and push up bills.

Anneka Kelly is one of the activists occupying the chimney. Speaking on a mobile phone she said:

“Energy bills are going through the roof, people are getting flooded out of their homes, we’re seeing droughts across the world but the energy companies are making a killing. We’re here because we want an electricity system that doesn’t cause our world to warm and our bills to rise ever higher. Gas is expensive and highly polluting, but if the Government gets its way we’ll be reliant on it for decades. Instead we should be investing in clean high-tech renewables that slash pollution and in the long run will cost a lot less.”

Contrary to claims by ministers and the industry, gas is a dirty fuel that poses an unacceptable threat to the environment. It’s also expensive - official figures from Ofgem show that the average UK energy bill rose £150 last year, with £100 of that due to rising wholesale gas prices. Only last week EDF raised their prices, following most of the other major companies and plunging even more people into fuel poverty. Meanwhile high-tech renewable systems are rapidly coming down in price, meaning that soon they will be cheaper, while communities across the country are turning their back on the Big Six energy companies in favour of cooperative community energy schemes.

Ewa Jasiewicz is on top of one of the chimneys. She said:

“A new dash for gas will leave the UK utterly reliant on this dirty expensive fuel for decades to come. Our energy system is being run by a cartel of corporations that has this government in its pocket. As long as we have an economic system driven by profit, we will have an energy system that ignores the needs of those suffering most from climate change and rising energy bills. With a quarter of the UK’s outdated energy infrastructure needing to be replaced, we have a once-in-a-generation opportunity to invest in renewables that could generate hundreds of thousands of jobs, radically cut emissions of carbon dioxide and stabilise energy bills. Clean green technology is already powering thousands of homes across the UK, and enjoys overwhelming public support.”

· It is comprised of three turbine houses and chimneys, labelled Units 1, 2 and 3. Unit 2 is complete and is operating at almost full capacity. Units 1 and 3 are further behind, with Unit 1 closer to completion than 3.

· When complete, the new CCGT plant will emit approximately 4.5 million tonnes CO2 per year when operating at full capacity. This is more than the annual emissions of Paraguay.[i]

· The Chair of the Committee on Climate Change, John Gummer, recently wrote to the Energy and Climate Change Secretary, Ed Davey, to warn that George Osborne's plans for a new generation of gas power could be illegal: “extensive use of unabated gas-fired capacity… in 2030 and beyond would be incompatible with meeting legislated carbon budgets.”[iii]

· He has also guaranteed that gas power stations that already have planning consent can, if built, continue emitting CO2 unabated until 2045, i.e. their full life-span, by exempting them from emissions regulations.[v] There is currently 13GW of gas that has either recently been completed, is in construction, or has been granted planning consent.[vi]

· Lord Turner, in his former role as Chair of the Committee on Climate Change, wrote to the Energy Secretary to warn this would lead to “the risk that there will be too much gas-fired generation instead of low carbon investment” and that the policy could take emissions "beyond the limits implied by carbon budgets."[vii]

· Last week, EDF hiked their energy prices by 10.8%, the highest of any of the big six energy companies so far this winter.

· An ICM poll found that more than two-thirds of people would rather have a wind turbine than a shale gas well near their home. [x]

No Dash for Gas