National march against vivisection in newcastle 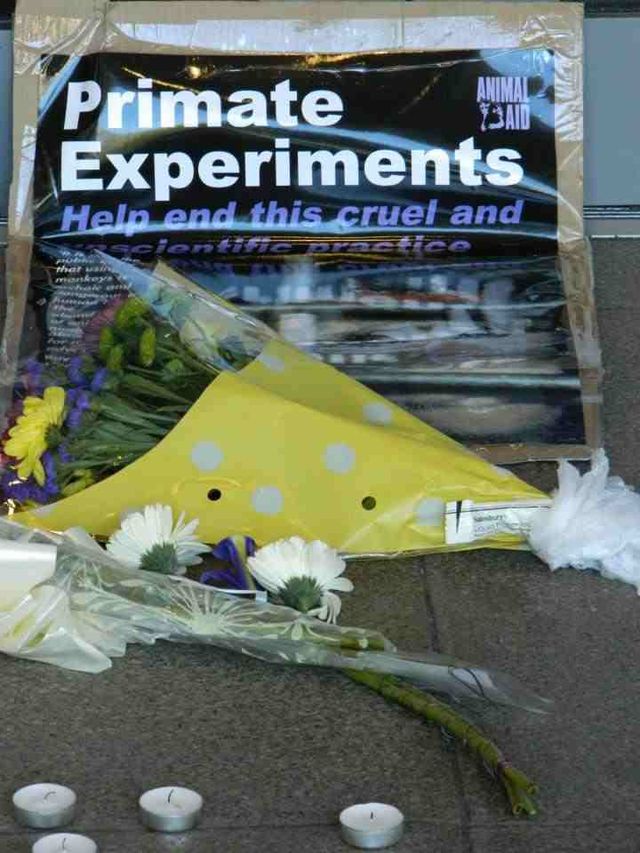 Yesterday (May 26th) saw 60-70 activists from all over the UK attending the National March and Rally Against Newcastle’s Death Labs.

With Banners, placards and posters activists took to the streets to protest and say “Close Newcastle Animal Lab”. Setting off from ‘The Centre of Life’ and Marching through the heart of Newcastle activists chanted “close Newcastle animal lab” and “vivisection is a lie why have the animals got to die”. The campaigners were cheered and clapped on with the public showing utmost support for our campaign against the vile death labs.

People were horrified to find out Newcastle University were responsible for and complacent in the deaths of thousands of poor defenceless animals every single year. The public were even more shocked to find out the Newcastle lab uses primates – this horrified and shocked people!

Then our very own Jon Procer spoke to the crowd :

Jons speech hit a sore nerve as he was heckled by a vivisector from Newcastle University making the most bizarre point ever “We dont test on puppies and dogs, we test on primates” – I mean really?

Tino Verducci spoke about the green hills campaign and how to help animal liberation world wide.

Then a speaker from Manchester Animal Action got up and spoke about the up coming demonstration against Manchester University.

After the speeches, activists held a fifteen minute rally at Kings Gate with chants “Blood Blood Blood on your hands” and “VIVISECTION IS A LIE WHY HAVE THE ANIMALS GOT TO DIE “

After fifteen minutes it was time to go to the death labs, marching past all the offices, chants of “Blood blood blood on your hands” rained out.

After a ten minute march activists arrived at the Gates of Hell (ie. Newcastle University “Medical” School).
Upon arriving activists went to the main door of the labs and lit twenty two candles in commemoration to all that lost there lives inside this disgusting lab. Activists also lay flowers and lay placards then held a two minute silence.

After the two minutes silence chanting of “CLOSE NEWCASTLE ANIMAL LAB” rang out as loud as possible. Activists left Newcastle University in no doubt what we want – Close the labs!

Jon Procer then spoke about what the lab dose and how 22 thousand experiments were carried out last year inside this hell hole lab.

The rally at the gates of hell lasted about an hour then we took off back for town marching back into Newcastle city centre people clapped waived and shouted in support of what we were doing.

We marched back to the set off point holding a ten minute rally with closing speeches and thanking every one for coming.

http://www.jackspratscafe.co.uk/* and a social event.

Close Newcastle Animal Labs campaign would like to thanks

For all there support in this march.

Want to get involved email us: