The Caravan for Climate Jobs is in Sheffield

The Climate Caravan and supporters from Sheffield set up displays and collected petitions in Tudor Square in Sheffield on 18th May 2012. The attached audio includes interviews with Sheffield Renewables,

http://www.sheffieldrenewables.org.uk/ the driver of the van, Solar Active,

http://new.solar-active.com/ and the Sheffield Campaign Against Climate Change 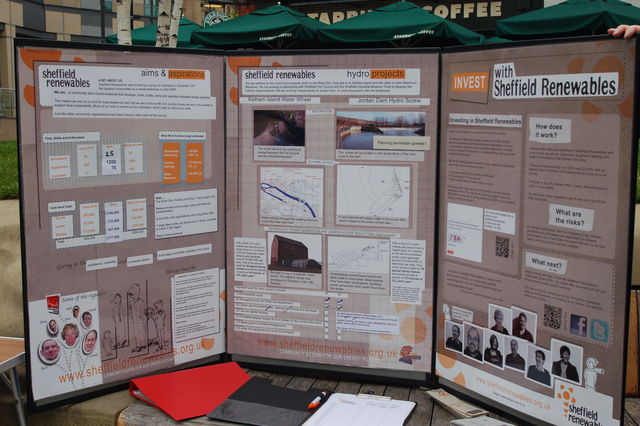 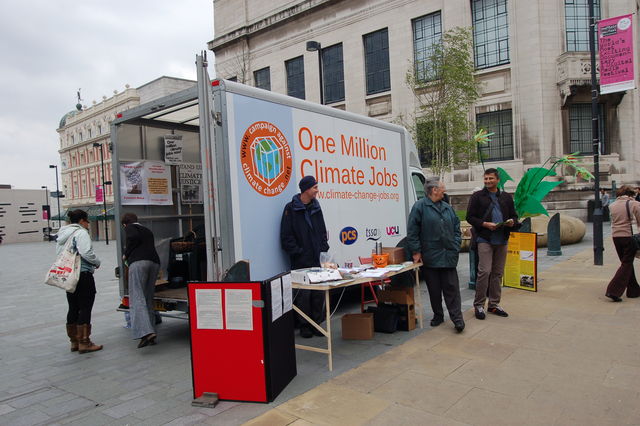 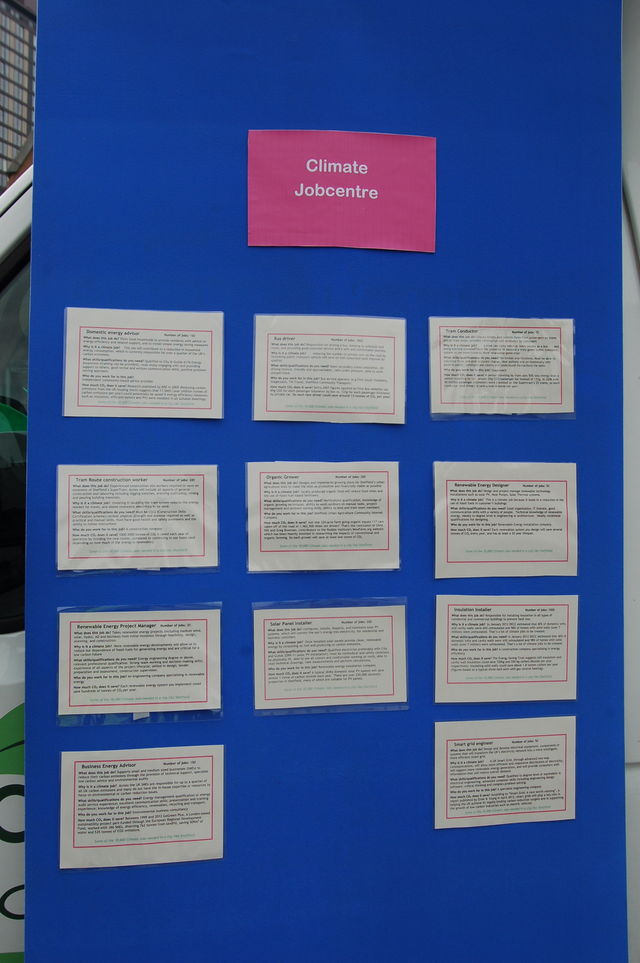 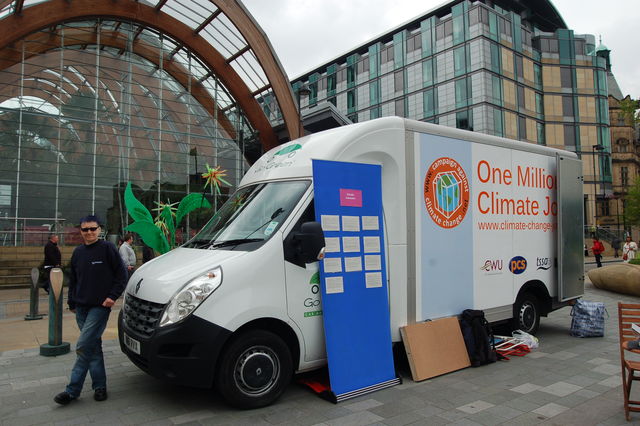 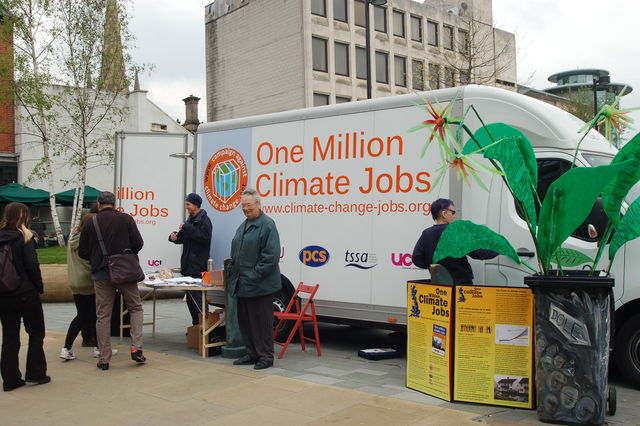 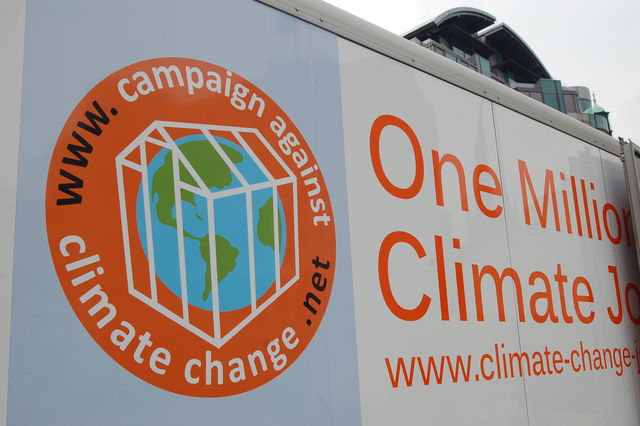 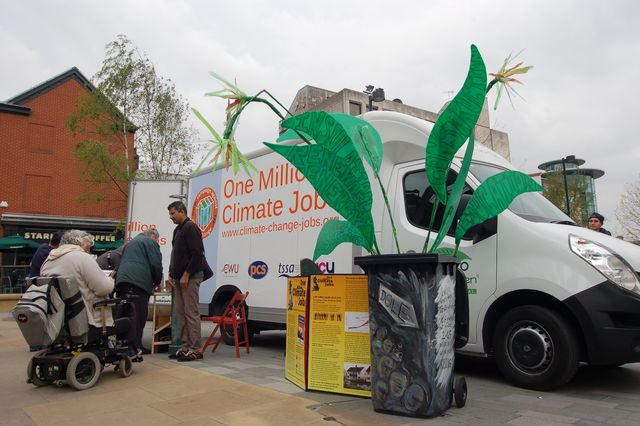 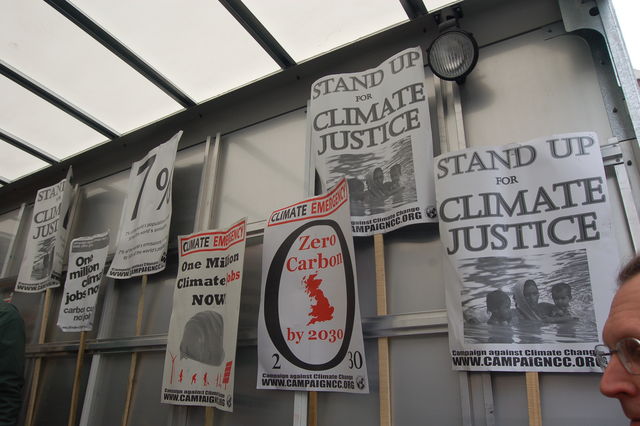 One Million Climate Jobs – creating the future we want

A Public Meeting coinciding with the visit to Sheffield of the National Climate Jobs Caravan:

Martin Mayer is chair of the Sheffield Anti-Cuts Alliance and President of Sheffield Trades Council. As a member of Unite the Union's Executive Council and the International Transport Workers' Federation (ITF) he works for public transport jobs and real solutions to climate change.

Two very different futures confront us at this moment – a continued push for fossil fuel extraction by powerful corporations, or a world of useful work to tackle climate change and bring security and wellbeing to all.

The One Million Climate Jobs campaign puts forward a solution to the crisis of high unemployment and austerity. It enables us to move rapidly to renewable energy, well-insulated homes, cheap public transport, healthy local food and skills for useful work.

Here in Sheffield we've already started to build a local movement of trade unionists, campaigners and faith groups to make this happen – we want you to join us and create a future that cares for climate, jobs and communities.

At this meeting you will hear about the One Million Climate Jobs Campaign, and how trade unionists and others can add their voices. We want to involve you in the dialogue about how to take these ideas forward, so as well as speakers there will be discussion, questions and action planning.

SATURDAY: Our follow-up workshop on Sat 19th May at 9.30-12, the World Development Movement are running a workshop on 'An economy for the 99% -ideas and tools to make it happen'. We will make the links between climate jobs and a new type of economy for people and the planet- also at Quaker Meeting House – all welcome.

We face an ongoing economic crisis with unemployment heading towards three million and one in five young people out of work. We also face the prospect of catastrophic climate change which will pose an even greater threat to the future of our children and grandchildren.

We can start to tackle both these problems now by forcing the Government to create a million new jobs dealing directly with the introduction of clean sources of renewable energy and greater energy efficiency in our buildings and transport systems. By expanding cheap public transport, insulating our homes, and training people in green skills. All this can be done for a fraction of the amount the Government has put into keeping the banks afloat.

This has been shown by the ONE MILLION CLIMATE JOBS REPORT produced by the Trade Union Group of the Campaign against Climate Change and endorsed by four national unions – the CWU, PCS, TSSA and UCU. The TUC is also calling for the creation of a million green jobs. The CLIMATE JOBS CARAVAN – backed by a number of national unions and campaign groups – is a 2000 mile campaign tour of towns and cities to promote the ONE MILLION CLIMATE JOBS REPORT and raise public discussion of how jobs lost in your locality can be replaced through the creation of the new industries and services that we need to ensure an environmentally sustainable future.