Last Saturday around one hundred and fifty people marched through Sheffield City Centre in response to Sexism in our city. Supported broadly across Sheffield under the banner of 'We will not calm down "dear"' women, men and children united in a loud and angry demo against austerity measures and their disproportionate effect on women. 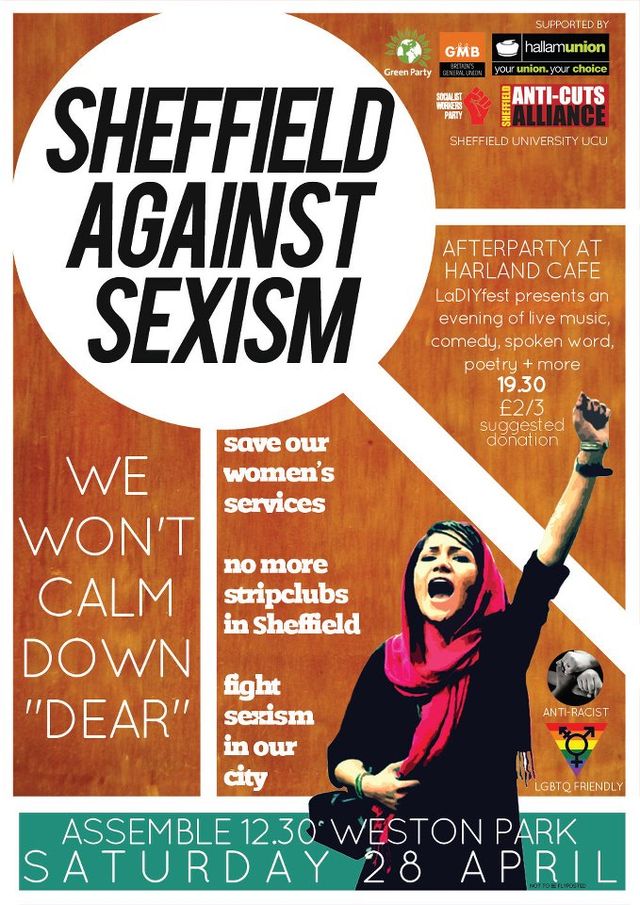 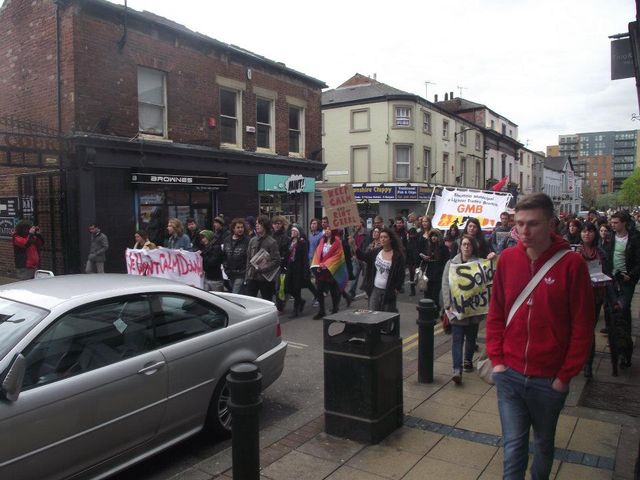 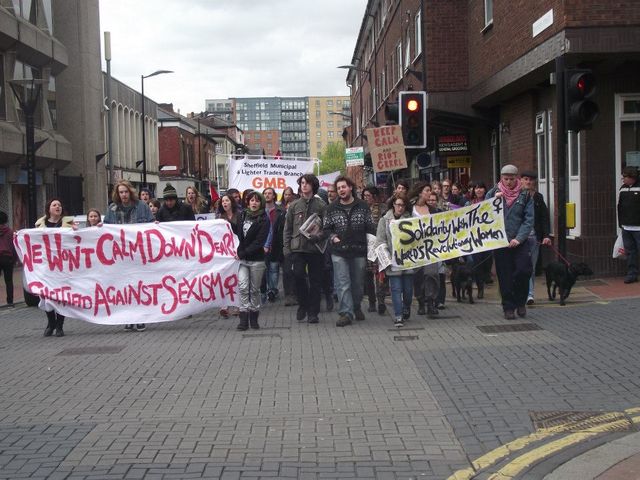 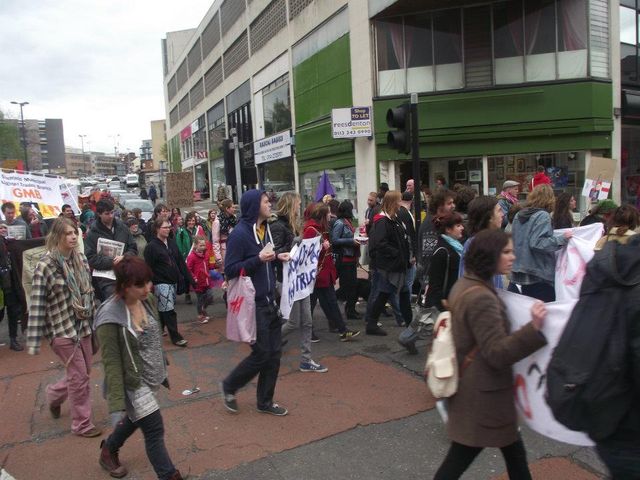 Women of Sheffield are angry. On Saturday April 28th around 150 women, men and children marched through the City Centre against gender discrimination and the disproportionate effect of the cuts on women. Speakers at the rally included representatives from Rape Crisis, White Ribbon, GMB, Green Party, Sheffield Anti-Cuts Alliance, TUSC and Sheffield Trades Council, who highlighted the need to unite over the cuts and their impact on the most vulnerable people.

Marchers was urging Sheffield to hear that when welfare is cut, the needs of the young, poor, sick and elderly do not simply disappear. It is women’s unpaid labour in the home that replaces this welfare. In times of economic crisis, rising unemployment figures show that domestic abuse increases, as well as gendered poverty. The cuts to women services are thus a further attack. Key local services in Sheffield being cut include, Rape Crisis, Young Women’s Housing Project, Women’s Aid, Sheffield’s Women’s Aid, Sheffield Domestic Abuse Support Unit, Haven House Project, as well as Sure Start, Age Concern, Agewell, and Disability and Social Care. (See here for full list

http://falseeconomy.org.uk/cuts/north-east/S/t1 ). Meanwhile Spearmint Rhino’s renewed their licences despite a vast number of public complaints, because sexism is seen as ‘good economic sense’. This is seen as blatant disrespect and disregard for women's already unrecognised and stretched labour.

The motto of the march ‘WE WON’T CALM DOWN DEAR!’ was directed straight at the Con-Dem coalition: women refuse be the invisible and silent victims of the greedy and short-sighted politics of the current government. Organisers say, ‘Women are not victims they are warriors, and on the 28th of April we will be heard. We can see through the window dressing of words like ‘equality’ and ‘equal opportunities,’ straight to the cabinet- full of rich, white men and women who are happy to line their pockets with working men and especially women’s exhaustion, exploitation and un(der)paid labour.’

As speaker Maxine Bowler from Sheffield TUSC stated if Rape Crisis is threatened 'We will march', we must support each other in these attacks.

Organisers urge that the fight not be contained to an isolation as a fight for women alone, but as we fight for 'women', we also fight against racism, capitalism, homophobia, war and disablism, which effects and reinforces the way different women experience oppression based on race, class, sexuality, location and abillity. The fight is inseparable and we must unite together.

In spring this year a group of students and workers got together in defiance against the government’s hypocritical approach to the big society. We are a united front called Sheffield Against Sexism with more action to come.