A round of news from Sheffield, West Yorkshire & Doncaster Sabs 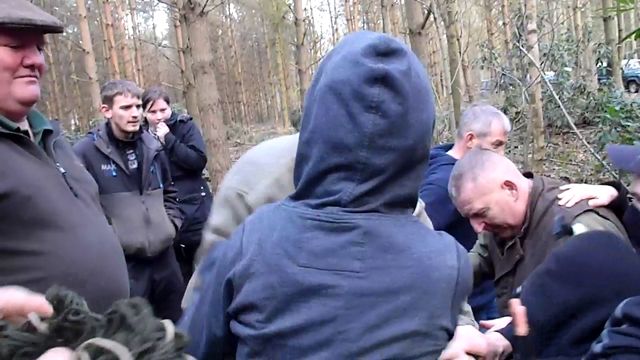 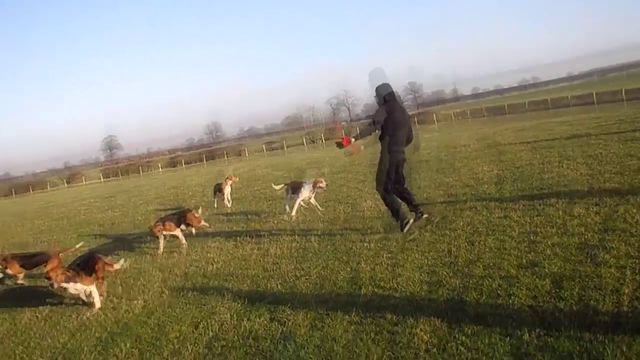 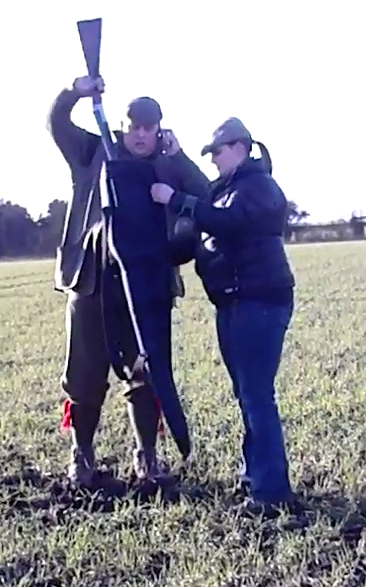 At the end of November we sabbed the York & Ainsty South hunt with Manchester Sabs. The morning was uneventful, but around mid-day a fox was hunted into an earth. We got to the earth before the terrier men, but over 10 people then came to move us off the earth so the terrier men could dig-out and kill the fox. These people became violent but we stood our ground and made them leave (pictured). They came back 2 more times that day to try again but we stopped them each time. They then came back with the police who arrested 5 sabs for "trespassing to disrupt a lawful activity", but these charges were all dropped the day before their court date! Sabs stayed at the earth till after dark to ensure the dig-out couldn't go ahead. Watch footage here:

At the start of December we sabbed the Meynel & South Staffs hunt, with Nottingham & Derby Sabs. We had a very successful day, taking control of the hounds several times and assisting at least 1 fox in its escape. Quote of the day was awarded to police officer 3812 when he said "But it's such a nice sight to see horses and dogs running over a field. It's only a fox and they don't kill many"!!

The next Sat we went and joined Nottingham, Derby & Coventry Sabs at a pheasant shoot in Leicestershire. The shoot packed up as soon as they saw 30+ sabs running towards them!

Mid December we visited the Badsworth & Bramham Moor hunt, where one sab was detained for "breach of the peace" and later released without charge. Half way through the day we heard that the York & Ainsty South hunt was hunting and digging out an old badger sett for foxes not too far away. We got there as quick as we could but a fox had sadly been killed before we arrived. The terrier men initially stopped what they were doing, but then later tried to continue the dig-out. We got them to stop, then waited in sight of the earth until after dark, when the fox eventually came out of the earth and ran off.

On Christmas Eve, we sabbed the Quorn hunt. with some other groups. We kept up with the hunt all day, ensuring a kill free day.

On New Year's Eve we went to have a look at the Brocklesby hunt near Grimsby, who haven't been sabbed for 15+ years. After about an hour the police turned up and informed us that this hunt somehow took out an injunction against sabs in 1995 which somehow still applies! So we decided to make a tactical retreat (for now) and join Nottingham Sabs at the Blankney hunt near Lincoln. Bizarrely the Per Ardua Beagles had met nearby and got some of their beagles mixed up in the pack of foxhounds - we had fun watching them try to round them all up, literally grabbing and carrying them, for the rest of the afternoon! Sabs helped a fox that was being perused by the hounds and another escaped into a badger sett.

Next we sabbed the York & Ainsty South hunt in a group of over 45 sabs. We made sure that the hunt had to deal with sabs all day and whenever they picked up the scent of a fox we were there to help them loose it.

We went to the Y&AS again the following week where we took the hounds from the huntsman throughout the day and kept them entertained (pictured). Some members of the hunt decided to start a fight with sabs half way through the day but failed rather dramatically to achieve whatever it was they wanted to achieve. Being sore losers, they went winging to their mates in uniform and managed to get 2 sabs arrested, but neither sab was charged with anything.

On Jan 21st we sabbed a pheasant shoot in Derbyshire with Manchester Sabs.

On the 28th, sabs visited the Claro Beagles in Yorkshire. This hare hunt hadn't seen sabs for many years - they took one look at us and cancelled their day's hunting before they'd even started. A pheasant shoot was next on the agenda, who also packed up and stopped killing (pictured) at the sight of sabs. And we finished off by going over to the Badsworth & Bramham Moor hunt nearby - the hounds were in cry when we got there so we called the hounds away from the fox's scent and split the pack up, then the hunt packed up. Footage of sabbing the shoot can be viewed here:

On the 4th, all the hunts that we knew of cancelled due to snow and frozen ground.

There was still snow everywhere on the 11th, but this didn't stop the Basdworth & Bramaham Moor hunt going out on foot. The police were at the meet looking for us before we arrived, even though we hadn't been to this hunt for 2 months! The police's "Farmwatch" division watched over us all day and saw no shame in openly siding with the criminals that regularly illegally hunt foxes (many of whom are farmers!). So we followed them for a stroll through the woods all day. The hounds didn't pick up a fox scent all day, so thankfully we didn't really have to do anything. Then, towards the end of the day, one of said farmers and a redcoat from the hunt decided to throw a few punches at sabs, in full view of the police. One cop jumped in and started waving a baton about, but surprise surprise they refused to arrest these men for assault and threatened sabs with arrests (and a baton) instead! No sabs were hurt. What a bunch of scum.

Next we visited the delightful South Notts hunt with a few other groups. The hunt seemed very agitated by our presence and took to legging it all day rather than properly hunting. Some hunt supporters took a different approach, by throwing bricks at one sab van - the police caught up with them and decided not to arrest them (too busy grabbing sabs for "breach of the peace"!), but legal proceedings against the culprits are still planned.

On February 25th we went to the Holderness hunt. Sabs haven't been to this hunt for around 5 years, and it was a pretty hard day, with an abundance of particularly scummy hunt supporters. We struggled to stay with the huntsman and hounds and at one point towards the end of the day we caught up with them only to find 2 of the redcoats had blood smeared on their legs. This leads us to believe that, sadly, they killed a fox when they got away from us - the first kill while we've been at a hunt that our group has known of in years.

We helped the locals sab the Quorn hunt in Leicestershire next. The day went really well with them unable to hunt no matter where they turned, and packing up very early at 2pm.

On 10th March we sabbed the last meet of the season for the York & Ainsty South hunt in North Yorkshire. Unsurprisingly, North Yorkshire police were already there, with a number of vans and 4 cops on horseback. Despite their presence, we successfully sabbed the hunt all day and took the hounds off them on more than one occasion - much to the annoyance of the hunt. The hounds got onto the scent of a fox once, but soon got a whiff of citronella and lost its scent. Whilst sabs called the hounds in the opposite direction, sabs in the van saw the exhausted fox escape!

On the 17th we went to look for a hunt that turned not to be out, so then went looking for the Rockwood Harriers hunt and found them pretty quick, hunting not far from Sheffield. They seemed surprised to see us. We stayed ahead of the hunt, waiting to act should a fox or hare pop up. A fox did pop up and ran out of a wood from the hunt, in our direction. We sprayed its tracks and waited for the hunt, but the hounds managed to lose its scent before they got to us and then went the wrong way! And they packed up nice and early at 2.30pm.

We finished the season off on March 31st, with a visit to Cumbria, to sab the final meet of the Ullswater hunt, with Cumbria, Manchester & Liverpool Sabs. It wasn't the best day as the hunt went up onto the fells earlier than we were expecting so we struggled to get close to them for most of the day. The day picked up a bit towards the end when we managed to take the whole pack of hounds from the hunt. The pack then split in two and went for a run on their own, down the fells back to their kennels - with the huntsman doing his best to catch them up, then packing up!

So that's another season out of the way! We'll be back out sabbing fox cub hunting in mid August, and busy with training and fundraising over the summer. All of the groups mentioned in this report would be very pleased to hear from anyone that wants to get involved in sabbing in any way - such as sabbing in

the field, driving, navigating, fundraising, fixing up sab vans etc - so please get

in touch! If you are able to make a donation to any the Northern/Midlands groups, then please donate to our PayPal account

sabdonate@hotmail.co.uk stating which group you want the money to go to.