In a new study marine scientists have warn that the rate of ocean acidification presently occurring is unprecedented in the last 300 million years. This is due to dissolving carbon dioxide from the atmosphere, much of which human activity has contributed over the last 200 years through the use of fossil fuels. The extent and rate of acidification enhances the prospect for a mass marine extinction event this century. Research in paleoclimatology and oceanography has revealed that anthropogenic climate change is driving Ocean Acidification threatening marine ecosystems.

Ocean acidification has been called the 'evil twin' of climate change with marine scientists warning climate negotiators in Durban of the necessity for climate mitigation action in December 2011, along with a statement on the IUCN website urging action to cut carbon emissions. New research in November 2011 from Australia's Antarctic Climate and Ecosystems Cooperative Research Centre showed the Southern ocean is warming and freshening.

Marine scientists warn ocean acidification is already impacting marine food webs which will lead to substantial changes in commercial fish stocks, threatening protein supply and food security for millions of people. The Northwest Oyster Die-off from 2006-2008 in the USA highlights the growing impact on commercial fisheries. The United Nations Environment Program estimates that 3 billion people use fish protein in their diet, with one billion people dependent on subsistence fishing as a primary food source. 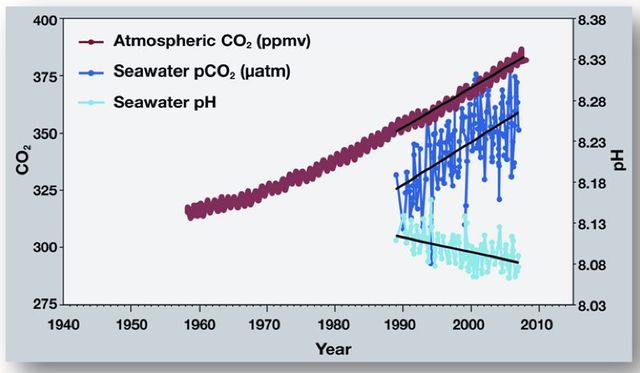 Correlation of CO2 in atmosphere, seawater and seawater pH (acidity)

The Earth's oceans act as a great carbon and heat sink which has been good for slowing the presence of carbon dioxide in the atmosphere and moderating the greenhouse effect which causes global warming. As Don Beck put it very succinctly in a 2007 post on Sydney Indymedia: Think Not 'Global' Warming - Think 'Oceans' Warming. That is one reason why we have only experienced a 0.8C to 1.0C rise in average global temperatures over the last 100 years - the world's oceans have been soaking up heat and CO2. To slow the process of ocean acidification and ocean warming humans need to reduce greenhouse gas emissions, and eventually devise technology to draw down and scrubb carbon dioxide from the atmosphere for sequestration (There is some promising research in this area.)

The chemical process for how the oceans absorb carbon dioxide are well known. CO2 reacts with seawater to form carbonic acid, which over time is neutralized by marine shelled creatures, corals and small planktonic creatures who form carbonate shells which is eventually sequestered on the sea floor. But when CO2 is absorbed too quickly, carbonate ions are depleted resulting in a reduced capacity for corals, mollusks and plankton to build coral reefs and their carbonate shells. When the smallest creatures start experiencing problems, this causes a rippling effect through the food chain affecting larger predator species.

Marine scientists have been warning policy makers for several years of the impact of ocean acidification. An international meeting in Monaco in 2008 issued the Monaco declaration, signed by 150 marine scientists from 26 countries warning that "Ocean acidification could affect marine food webs and lead to substantial changes in commercial fish stocks, threatening protein supply and food security for millions of people as well as the multi-billion dollar fishing industry."

“The chemistry is so fundamental and changes so rapid and severe that impacts on organisms appear unavoidable.” said James Orr of the Marine Environment Laboratories (MEL-IAEA) and chairman of the symposium. “The questions are now how bad will it be and how soon will it happen."

US based Natural Resources Defense Council (NRDC) produced a 21 minutes video called Acid Test: The Global Challenge of Ocean Acidification in 2009 with actress Sigourney Weaver doing the narration which eloquently explains the extent of the issue and connection with global warming and climate change. At the same link a 2009 lecture by emminent marine chemist DR Andrew Dickson from the Scripps Institution of Oceanography in San Diego presents Acidic Oceans: Why Should We Care? which explains in more technical detail the problem of ocean acidification.

The latest study, released in March 2012, was done by a team of researchers from five countries eho reviewed hundreds of paleoceanographic studies, and found evidence for only one period in the last 300 million years when the oceans changed even remotely as fast as today: the Paleocene-Eocene Thermal Maximum, or PETM, some 56 million years ago. During the PETM over a period of about 5000 years there was a surge of carbon dioxide which doubled atmospheric concentrations that resulted in global average temperatures surging up by about 6C.

We have already experienced atmospheric CO2 rising about 30 percent, to 393 parts per million in the last 100 years, with ocean pH falling by 0.1 unit, to 8.1. This rate of acidification is 10 times faster than during the PETM event 56 million years ago according to lead author Bärbel Hönisch. Predictions by the Intergovernmental Panel on Climate Change (IPCC) show that pH may fall another 0.3 units to 7.8 by the end of the century which could see a marine mass extinction event similar to those observed during the PETM.

We are already starting to see the effects of ocean acidification as it impacts on fisheries and ecosystems.

Ocean acidification will impact the economic importance of fisheries, with the people most affected being island and developing countries reliant on subsistence fisheries for protein. A 2010 United Nations Environment Program report on Environmental Consequences of Ocean Acidification: a threat to Food Security (PDF) estimates that 3 billion people use fish protein in their diet, with one billion people dependent on subsistence fishing as a primary food source.

"The contribution of marine protein to global food security is substantial. Fish, including shellfish, contribute 15% of animal protein for three billion people worldwide. A further one billion people rely on fisheries for their primary source of protein. Fish are even more important in countries where other protein sources decline seasonally." says the report.

Achim Steiner, UN Under-Secretary General and UNEP Executive Director, said in a 2010 media release: "Ocean acidification is yet another red flag being raised, carrying planetary health warnings about the uncontrolled growth in greenhouse gas emissions. It is a new and emerging piece in the scientific jigsaw puzzle, but one that is triggering rising concern".

"Whether ocean acidification on its own proves to be a major or a minor challenge to the marine environment and its food chain is to date unknown. But the phenomenon comes against a backdrop of already stressed seas and oceans as a result of over-fishing to other forms of environmental degradation. Thus the public might quite rightly ask how many red flags do governments need to see before the message to act gets through," he said at the launch of the report in Cancun in 2010.

Many commercial fishermen and aquaculture farmers are already aware of ocean acidification and the threat to their livelihoods and culture. It just requires Government's to impose the necessary regulations to limit and reduce carbon emissions. The National Fisheries Conservation Centre (NFCC) and Sustainable Fisheries Partnership have produced a series of informative videos which highlights the threat to commercial fisheries.

Resolving the problem of ocean acidification will not be easy, and may prove insurmountable in the timeframe we have available for taking mitigation action in reducing greenhouse gas emissions.

"It's not a problem that can be quickly reversed," said Christopher Langdon, a biological oceanographer at the University of Miami who co-authored the study on Papua New Guinea reefs. "Once a species goes extinct it's gone forever. We're playing a very dangerous game."

By the end of this century with business as usual we are likely to hit a similar temperature of 6C of warming similar to that experienced during the PETM event 56 million years ago. We still have global carbon emissions increasing with a Record increase in Greenhouse gas emissions for 2010. Scientists such as James Hansen, Ken Caldeira and Eelco Rohling at December 2011 American Geophysical Union meeting warned about climate sensitivity and that the paleoclimate record points towards potential rapid climate change.

Unless we start mitigation action very soon what was done naturally in 5000 years we are doing in about 100 years. Scientists and economists have warned that Carbon Emissions need to peak this decade to meet a 2 °C temperature goal. Even the conservative International Energy Agency (IEA) has warned Bold change of direction needed globally to meet climate commitments. Yet the Durban mandate from last year proposes no significant international action until at least 2020. Read climate policy analyst Mark Lynas description of the outcome of Durban - a major step forward but not for ten years.

Richard Feely, an oceanographer at the National Oceanic and Atmospheric Administration who was not involved in the paleoclimate study commented, "These studies give you a sense of the timing involved in past ocean acidification events — they did not happen quickly. The decisions we make over the next few decades could have significant implications on a geologic timescale."