As UK occupations squat more buildings the police, many of whom have criminal records, are flouting the law to harass protesters, the Lords are debating making squatting residential buildings illegal, the government plans to make hundreds of thousands homeless and Occupy LSX is threatened with eviction.

On 8th January 2012 40-50 police officers raided the Railton Hotel, next to the train station in Lancaster, which had been squatted by Occupy Lancaster the day before. At approximately 8.15 pm, the police used a battering ram to break through the front door. Once they had gained entry, the police arrested the four occupants who were inside at the time. The Occupiers secured the building legally, and displayed notices of Section 6 of the Criminal Law Act 1977 on the exterior of the building, but the police paid no heed to the law and Occupy Lancaster are now seeking legal advice.

Also on 8th January undercover police arrested 3 occupiers at Occupy Liverpool on suspicion of possession; none were found to be in possession of "controlled substances". Twenty or so police then surrounded the occupied building stating that it was a crime scene and laid siege to it for 3 hours. Like Occupy Lancaster a Section 6 notice was displayed but the police acted as as if squatting was already illegal.

Later this month Occupy Sheffield will be hosting a national occupy conference in the squatted Citadel of Hope. 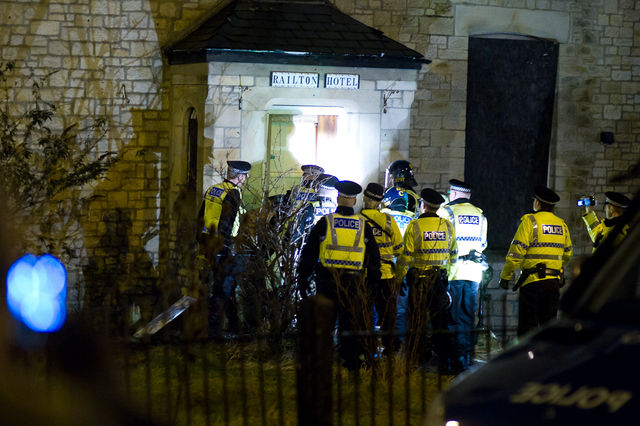 Quick question, did the police come with a court appointed bailiff? This is the only occasion when they can legally assist in the removal of individuals from property which isn't theirs. And... they were all arrested? On what charges?