#Occupy and the Church

“What would Jesus do?” asked a pithy placard at the Occupy the London Stock Exchange protest recently. It seems rather obvious in a way. For some the answer was given in another St Paul’s placard, carried by a man dressed as Jesus “I threw out the money-lenders for a reason”. Of course we’re not in Jerusalem, nor are we technically in a temple. 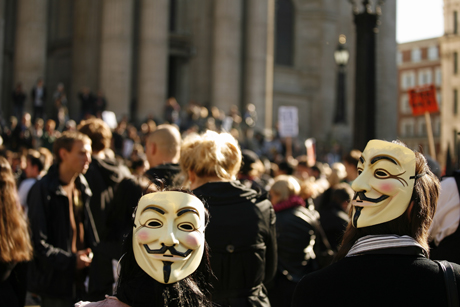 But according to David Cameron’s speech to mark the anniversary of the King James Bible, we have a dire need to “return to Christian morals”, and we the people should revive “what we stand for” and go back to the Bible to define ”the kind of society we want to build.” Some Occupy supporters may agree with some of these sentiments. We are a ‘broad church’ and the Bible, and the Jesus it portrays does contain a lot of progressive political references. Plus the idea of reformulating what we are about as a nation sounds quite democratic.

There is, however, a dissonant note associated with a politician – the politician - lecturing the masses on returning to Christian morals. As Luke 16:13 has Jesus himself saying: “No servant can serve two masters.. you cannot serve God and mammon.” Cameron’s economic nationalism should also grate on Christian souls.The world needs international co-operation to solve its many problems, and Christendom was never ‘Little England.’ In fact, for most of its history it was associated with Europe as a whole ,and further afield. Yet Cameron retreats pointlessly from the European project just when we should be pulling together against the dictatorial power of the financial markets.

David Cameron’s visionary idea for Britain was ‘the big society’. Revd Giles Fraser says “one can imagine Jesus being born in the protest camp” and the early Christian movement was one of the biggest ‘big society’ movements in history. In a way those hardy souls camping out, in an effort to transform the system are the closest thing we have to a functioning global – big – society. Yet Cameron’s government has recently legislated to ban political camping!

The energy, practices and idealism Occupy embodies is a potentially huge, productive motor around which to build a new, enlightened economy. Yet no major politician has been willing to engage with the movement on its own terms. All we ever hear from them is words of demonisation or co-option.

However the church is quite a different matter. As Giles Fraser put it recently: “Occupy .. begins .. with the idea that lasting change is only possible if more people are sucked into the conversation, more of us educate each other as to the workings and effects of a dysfunctional economy… Remember the total non-event that was Tony Blair's Big Conversation? Well, this is how you do it properly”

Or, as the Archbishop of Canterbury himself put it earlier in the year: “A democracy going beyond populism or majoritarianism but also beyond a Balkanised focus on the local that fixed in stone a variety of postcode lotteries; a democracy capable of real argument about shared needs and hopes and real generosity: any takers?”

It is now commonly agreed that debt-based finance capitalism has failed us, and from within Occupy that we need alternative, civic institutions to develop our collective understanding, and transform society. Unlike the state and the market, civil society does not yet have a recognised political form, but through the promotion of its egalitarian Assembly model of decision-making, that is exactly what many in Occupy are hoping to create.

The roots of organised religion are radical and quite relevant today. The early Church was a decentralised, counter-cultural and international movement in which persecuted Christians promoted forgiveness of sins (including oppressive debts), interest-free lending, mutual support and common ownership. Going back further, the Old Testament refers repeatedly to ideals of economic justice and in particular of debt-cancellation and 'jubilee'. So, in the spirit of the recent Christmas season, and right at the start of a new ('Diamond Jubilee') year, an interesting question comes to mind. Could Occupy and the church join forces in 2012?

Working together, nationally and internationally could we not make alternative civic institutions to develop, quoting the Archbishop of Canterbury again a conversation about "who.. we are as a society" and “a long-term education policy at every level that will deliver the critical tools for democratic involvement, not simply skills that serve the economy”?

On the wider, European level, this would chime with the Chief Rabbi Jonathan Sack's recent call for European Jews and Christians together to "rediscover .. faith and prophetic voice" and to "recover the Judeo-Christian ethic of human dignity in the image of God. Humanity was not created to serve markets. Markets were created to serve humankind"

In our broken times, with people neglected and the community fabric undone, a well-organised common endeavour between the church, Occupy and other civil society actors could help revitalise the true spirit of our culture, and the church, and transform our ailing European and UK political economy.