To show our power, on May 1st, 2012, we will be organizing for such a mass participatory and bold collective action: a national general strike, mass boycott, student strike/ walk-out and mass day of action. We will be organizing within our unions- or informal workplace organizations where there’s no union or the union isn’t supportive- to hold a one-day general strike. Where a strike is not possible, we will be organizing people to call in sick, or take a personal day, as part of a coordinated “sick-out”. Those who are students will be walking-out of their schools (or not showing up in the first place). In the community, we will be holding a mass boycott and refusing to make any purchase on that day. 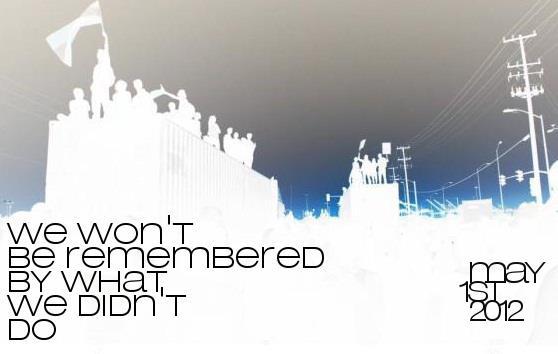 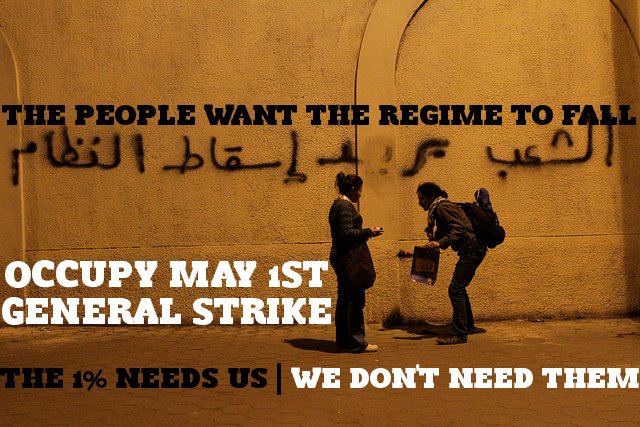 Which way forward for the 99%?

There have been a wave of repressive attacks on, and evictions of, various Occupy camp sites throughout the country including where the movement started in Zucotti (Liberty) Park. But even before the evictions and repression escalated to the current levels, questions were being asked: what’s the way forward for the movement? Already there have been glimpses of organizing and action that are leading the way and shining a light for the rest of us to follow: the Oakland General Strike, Occupy Foreclosures, and other actions. These actions show that, fundamentally, all of the strategic questions revolve around the question of power. The power of the 99% vs. the power of the 1%

Although the 99% holds enormous power -all wealth is generated, and the current society is built and maintained through, the collective labor (paid and unpaid) of the 99%-, we do not frequently exercise this collective power in our own interests. Too often we fight amongst and scapegoat each other as the source of the problem through: racism, patriarchy, xenophobia, occupational elitism, geographical prejudice, heterosexism, and other forms of division, oppression and prejudice. This is necessary for the 1% to maintain control because their power is only exercised by different segments of the 99% actively oppressing and working against other segments of the 99%, in addition to us neither being fully aware of, nor organizing to utilize, the collective power we have. The result is that many segments of the the 99%- people of color, women, GLBTQ, immigrants, those with less formal educational credentials, those in less socially respected occupations or unemployed, the homeless, and others- deal with overlapping forms of oppression and societal prejudice; all of us remain divided amongst each other; and the 1% continues to increase their power and wealth because of this.

Currently, the state of the economy has hit all of us (some facing overlapping prejudice and oppression, harder than others). There are too many people out of work; our pay has barely or hasn’t kept up with rising costs; our social services have continued to be cut; our influence on government has eroded; and our civil liberties have been attacked. This has been going on while the elites of this country have captured an increasing share of wealth; have had the highest decreases in the amount of taxes they pay; have attacked our social services and organizations of popular defense (such as our unions and community organizations); and have consolidated to an even greater degree their power over politics. The Business Insider- ironically- provides one of the more useful series of charts that root the Occupy movement’s concerns in the sobering historical fact that we experience.[1]

The way forward must involve building and showing our popular power against that of the elite. But the form of our power must be different from theirs: we must fight fire with water. Where they exercise hierarchical power over us to dominate, control, exploit and oppress; we must build and exercise horizontal, bottom-up power with each other to cooperate, liberate and collectively empower each other. We need to organize ourselves autonomously from all forms of hierarchical power relations in our communities, schools and workplaces to fight collectively for our interests. This must include a rejection of attempts to divide and rule us; a rejection of racism, patriarchy, xenophobia, elitism and other forms of oppression; a rejection of attempts by electoral parties, powerful special interest groups and others to co-opt and control our movement.

The camp occupations built the movement and brought global attention to the variety of concerns of the 99%. They inspired many; provided a sense of hope and solidarity; brought economic justice and the problems of power inequality back into spotlight of national conversation; highlighted the need for cultures, societies and institutions of direct democracy based on "power with"- not "power over" - each other; served as a spaces of convergence for sharing ideas and planning action; and in some camps, they even provided a temporary space for those who needed a home and a community where folks could face less harassment than they normally faced. The camp occupations have served a fundamental role in the movement; but it’s time to move beyond them.

We need to develop the movement beyond the camp because the majority of the 99% can’t camp out in a city center. The majority of the 99% have obligations and vulnerabilities that prevent them from such time-consuming, geographically-specific action including: work, school, responsibilities in caring for children or other dependents, particular health needs, etc. So in order for us to truly exercise our power as the 99% and to truly be participatory, we need to find ways where all of us can participate, and be valued, in whatever capacity and with whatever time we have to contribute. We need our action to be as participatory, diverse and widespread as possible. We must boldly show and build our collective power.
Show Power
To show our power, on May 1st, 2012, we will be organizing for such a mass participatory and bold collective action: a national general strike, mass boycott, student strike/ walk-out and mass day of action. We will be organizing within our unions- or informal workplace organizations where there’s no union or the union isn’t supportive- to hold a one-day general strike. Where a strike is not possible, we will be organizing people to call in sick, or take a personal day, as part of a coordinated “sick-out”. Those who are students will be walking-out of their schools (or not showing up in the first place). In the community, we will be holding a mass boycott and refusing to make any purchase on that day.

This action will necessarily be a symbolic show of power because any decrease in economic activity that day will likely be compensated for by purchases and extra work activity the days before and after May 1st. But it will be symbolic in the way a cannon shot across the bow of a ship is symbolic: it doesn’t do any damage; but it warns our opponent that we are willing and able to damage their boat if necessary. And perhaps just as important as the day itself, the massive organizing and outreach efforts in the months leading up to May 1st will allow us the opportunity to talk to our co-workers, families, neighbors, communities, and friends about the issues of the 99%, the source of our power, the need for us to stand up to the attacks we are facing, the need to confront the various oppressions that keep most of us down in one way or another (some of especially so) and all of us divided, and the need for us to stand in solidarity with each other to fight for our collective interests, which is structurally, and therefore inherently, against the interests of the 1%. We can build our collective consciousness, capacity, and confidence through this process; and come out stronger because of it.
Build Power
In addition to showing our power on May 1st, we need to build bases of popular, bottom-up, collective, anti-oppressive and anti-hierarchical power in our workplaces, communities, and schools. So we will be doing a variety of workshops, building a variety of organizing campaigns, and engaging a variety of actions on the local level to contribute to the building of such collective power. Some of the workshops, campaigns and actions that we will develop and engage in include: organizing new unions, becoming more active in participatory unions; making our hierarchical unions more participatory; occupying foreclosures; building tenant unions; blocking evictions; preventing foreclosures; and creating solidarity networks, to name a few. We will not be co-opted by electoral parties, or hierarchical organizations looking to use the movement to serve their interest while diffusing our power. Instead we will organize, educate, and agitate where we are at to build power with each other and to fight directly for our interests: the interests of popular power against the interests of elite power. All of us must contribute for this effort to be effective; but, to the greatest degree possible, those contributions must be collective in nature because our true power is in our solidarity with each other.

Through this effort we are looking to offer real solutions to addressing issues of immediate concern where each of us is at, through direct collective action from the bottom-up. The goal is to continue the ongoing shift currently happening within the movement from just mobilizing, to organizing (or to move from mobilization, to massification[2]). Mobilizing is necessary, but it is not enough. We can’t just call people out to engage in action. We need to build the networks, organizations and campaigns that provide the opportunities for an ever greater number of people to participate in the decision-making process and functioning of the autonomous popular organizations we are creating. Our movement is leaderless, which also means that we all must be leaders. But the leadership we build is again, with, not over, others. We need to all truly listen to and support each other in developing our consciousness, capacities and confidence. We need to see the fights against the various oppressions which keep folks down and divide the 99% against itself, as central to, not distractions from, the effectiveness of our struggle. We must discourage and isolate egotistical, self-serving and movement-killing tendencies we encounter while encouraging and developing collective, liberatory and movement-building tendencies. Our participatory, bottom-up networks, organizations and campaigns will be the way through which we build our power and make small gains in the medium term. But they will also serve as the basis for a new world that we are building toward. This new world in our hearts that we are building and showing, within the shell of the old one that we are confronting, is one in which people share power with, not over, each other. It's where workers themselves democratically control their workplaces; where everyone can find meaningful, socially-useful and balanced work that is carried out in comfortable conditions. It's where those who aren't able to work (or who have put in their share of their lifetime) are taken care of by society; where we abolish rulers over us and instead societies directly decide for themselves how to live, develop and grow. It's where our environments are healthy, beautiful and sustainable; where we all have the educational and social opportunities to develop and contribute our full capacities to our families and societies. It's where people can live in nice homes and safe communities, get their health needs fully taken care of, eat healthy and well, and not have to worry about meeting their needs or the needs of their families; where we can all have time and resources to enjoy life; and where the global human society is driven not by competition, oppression, exploitation, domination and war; but by love, freedom and solidarity. We, the 99%, will build our power and show our power until we've occupied our workplaces, our communities, our schools, our lives, our world... until we've occupied everything!
Occupy May 1st


Occupy May 1st on Facbook: