Syria: The orwellian "Responsibility to Protect" used to justify all out war

The Syrian Arab Republic now faces the “Responsibility to Protect” (R2P) as a threat. R2P is being prepped to be wielded as a weapon by Washington and NATO. It is a neo-imperialist device under the cover of sheep’s skin that appropriates the language of humanitarianism. The plan is to oust President Bashar Al-Assad from power and install a new client government in Damascus. 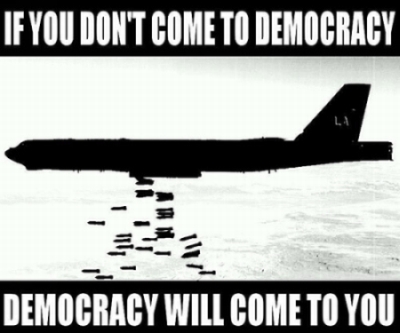 Syria: The orwellian "Responsibility to Protect" (R2P) used to justify "regime change" and all out war

The Arab League coupled with a proxy group called the Syrian National Council (SNC) that is the creation of a tactical alliance between the Syrian branch of the Muslim Brotherhood, Washington, NATO, Israel, and the Persian Gulf’s petro-monarchs is being used within the framework of false pretences of humanitarianism for a plan to oust President Bashar Al-Assad from power and install a new client government in Damascus.


The Arab League: A Chamber of Treachery and Cowardice

The Arab League is a dysfunctional and largely ceremonial body of hyperbole that has been utterly stripped of any value it once had when it was originally founded in 1945. It has been hijacked and serves Washington and its NATO allies instead of any genuinely Arab interests. The League’s ultimatums against Syria are fully in tune with the regime change plans against Damascus.

Libya was suspended from the Arab League before NATO started its war. The League was used to give cover to the Pentagon and NATO for their war and regime change agenda against Qaddafi. It is Saudi Arabia and the Gulf Cooperation Council (GCC) that have helped hijack the League. The GCC is comprised of the Persian Gulf petro-sheikhdoms of the United Arab Emirates, Kuwait, Bahrain, Qatar, Oman, and Saudi Arabia. None of these countries are model states, let alone democracies. Their foreign-installed leaders have betrayed the Palestinians, helped attack Iraq, support Israel against Lebanon, demolished Libya, and now they conspire against Syria and its regional allies.

In a blatant act of hypocrisy, the unelected despots of these petro-sheikhdoms have announced that Qaddafi’s regime was “illegitimate” and now are making similar statements about Syria. This is while the Saudi and Bahraini regimes themselves kill and terrorize their own unarmed citizens who are protesting in the streets of Saudi Arabia and Bahrain for fair treatment, basic rights, equality, and freedom.

The GCC has forced the Arab League to support the de-legitimization of the Libyan government and the war against Libya in the form of sanctions and no-fly zones. Now it wants to impose political and economic sanctions on Syria and to cause the country to internally implode, while it tries to fashion an Arab League mandated no-fly zone as a counter-movie to the Chinese and Russian vetoes at the U.N. Security Council. The U.S., Britain, France, and Turkey are also preparing to help it in this regard.

The mainstream media, such as the BBC and Al Jazeera, in the NATO countries and Arab monarchies are willing to print, publish, or broadcast anything that will degrade Syria and support regime change through sectarian, unprofessional, false, and inflammatory reporting. They are not to be trusted in regards to the facts on the ground in Syria. The mainstream media in the NATO countries and the GCC continuously play with words, provide no verified reports, and cite recently created foreign-based groups as their sources. Amongst these group is the British-based Syrian Observatory for Human Rights, which ironically endorses Saudi rulers while it claims to espouse democratic ideals.

Protests demanding reforms and democratization have taken place in Syria. Other protests against corruption and linked subsidy price changes also have taken place, but not on the scale and magnitude that NATO and the GCC portray. Initially there was a forceful crackdown that coincided with attacks by armed groups that had taken advantage of the protests. The problem was compounded by unidentified attackers who attacked both Syrian civilians and Syrian security forces that ignited instability. As tensions built, this all became further complicated by internal fighting amongst the elite families that form the oligarchies in Damascus. The Syrian branch of the Muslim Brotherhood has also tried to capitalize and armed wings of it, with help from foreigners, have tried to stroke the flames of violence to topple Bashar Al-Assad.

The situation in Syria is complicated, because there are several competing trends of opposition. This includes the opposition forces in Syria, which range from government lackeys to individuals that genuinely want reform. Aside from the Syrian Muslim Brotherhood, what most of the internal opposition has in common is that they are against violence, any form of foreign intervention, and want reform instead of regime change. It is this opposition that forms the Syrian National Coordination Committee (SNCC), which critics calls a regime appendage.

Members of this domestic opposition have been beaten and killed in Syria. This includes Mashaal Tammo, a Syrian Kurd opposition figure. Although there are over a dozen unrecognized Kurdish political parties in Syria, his murder according to Kurdish leaders was an act aimed at fomenting violence in the Kurdish areas of Syria. Several Kurdish leaders immediately denounced the murder as the work of those who want to frame the Syrian government and unleash chaos in Syria between Kurds and Arabs. Other internal victims include the cartoonist Ali Farzat who was kidnapped by unidentified gunmen and brutally beaten in late-August-2005. There is a chance that undisciplined members of the Syrian internal forces could have been behind the attack, but the attacks could have been designed to frame Damascus.

Outside of Syria, Washington and its allies have done everything to co-opt the SNCC or silence the voices of the SNCC and other internal opposition forces that are against foreign intervention and the use of violence. When a delegation of the SNCC arrived in Cairo to hold talks with the Arab League, it was immediately attacked and beaten by a mixed crowd of SNC supporters that were waiting for them. The Arab League too has opted to recognize the SNC, which is not popular internally in Syria.

In reality, the SNC is controlled by the Syrian branch of the Muslim Brotherhood and several Salafist groups. Some of the people listed as SNC members were also not consulted before they were added and play no real role in the organization. In this regard, the Muslim Brotherhood is being promoted as the alternative to Bashar Al-Assad by Turkey, Saudi Arabia, Qatar, and the GCC.

The SNC, which was formed in Istanbul a month after another Syrian transitional council was formed in Ankara, cannot be trusted. They have blatantly lied countless times about their internal support and events in Syria. Nor do they provide any form of a viable alternative to the Syrian regime. Their roster is filled with shady individuals with close ties to foreign governments and organizations that serve the interests of the United States and the European Union. According to Ayoob Kara, a Likud parliamentarian from the Israeli Knesset, the Syrian opposition was in contact with Tel Aviv to help oust the Syrian regime. Kara also made it clear in a speech to the Knesset that Israel must intervene in Syria as a means of fighting Iran and its allies.


Begging for Intervention: Parallels between the Transitional Councils in Libya and Syria

In Libya the Transitional Council was used to supplant the Jamahiriya in Tripoli. Now the SNC is being used is illicitly try to takeover Syria. The SNC will transform Syria into a docile client state divided and managed by Turkey, Israel, Jordan, and the Saudi-led GCC states on behalf of Washington. The recognition of the SNC by the Arab League and Turkey is part of this objective.

Before NATO’s war in North Africa, the Transitional Council in Libya was begging for military intervention by the U.S., Britain, France, and NATO. Likewise, the SNC and the individuals who form it have been begging for NATO military intervention against Syria. The SNC has even posted the coordinates of defensive infrastructure in Syria that they want bombed by the Pentagon and NATO. Members of this opposition have also posted maps of Syrian Air Force bases and Russian naval infrastructure to help NATO identify military targets. What is very telling about the orientation of the SNC is that these facilities have very little to do with internal politics or crowd control and a lot to do with Syrian national defence.

It is in this context that a failed attack by the so-called “Free Syrian Army” was launched on the intelligence wing of the Syrian Air Force in Damascus. This was not an act of protest, but a badly organized act of war that was intended to weaken Syria’s defensive aerial capabilities in case it was attacked. The Free Syrian Army in reality is a front organization that is controlled and manned by the GCC, Turkey, Jordan, and NATO with mercenaries and groups that can loosely be called “Al-Qaeda.” This should come as no surprise in an era when the U.S. Congressional Armed Services Committee has been told by Admiral McRaven that covert operations with U.S. Special Forces involvement are vital to the Pentagon’s modern wars.


The Orwellian Responsibility to Protect (R2P): A Tool of Trans-Atlantic Wars

The Syrian Arab Republic now faces the “Responsibility to Protect” (R2P) as a threat. R2P was not used in Libya, but it was mentioned a lot. The frequent mentioning of the R2P was brinkmanship for future wars.

R2P is being prepped to be wielded as a weapon by Washington and NATO. It is a neo-imperialist device under the cover of sheep’s skin that appropriates the language of humanitarianism. Where is R2P against Israel in Palestine or when it attacked Lebanon in 2006? Where is R2P against the foreign-imposed dictators of Bahrain and Saudi Arabia? Where is R2P when it comes to the brutal Moroccan occupation of Western Sahara? Where is R2P in the Democratic Republic of Congo? These are all places where R2P will never even come to be mentioned, because it is against the interests of Washington and its allies.

It is a diplomatic concept constructed in Canada by the Department of Foreign Affairs and International Trade (DFAIT) through the International Commission on Intervention and State Sovereignty (ICISS) in 2000. The concept essentially posits that a country’s independence is not a right and can be taken away by the international community when the need arises. The international community under the R2P paradigm has the responsibility to intervene in any independent country in order to protect that country’s citizens.

Now, both the universities and civil society in the form of NGOs inside NATO countries have a big role to play in the dissemination of the R2P paradigm. They are pushing for its normalization in international relations and its use in Syria. Together with the recognition of the unrepresentative SNC and the mirage of Arab legitimacy provided by the undemocratic collection of GCC despots that have hijacked the Arab League, R2P will be utilized to create an international legal regime that will work to isolate, cripple, and subjugate Damascus.