The time is ripe and in fact long overdue for issuing a call for an international anti-NATO initiative addressed to individuals, organizations, political parties and governments to convene an extraordinary session of the United Nations General Assembly to demand the disbanding of the North Atlantic Treaty Organization as a – as the gravest – threat to world peace. 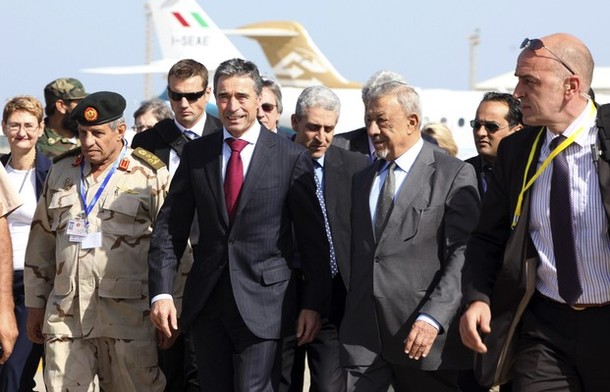 
On October 31 North Atlantic Treaty Organization chief Anders Fogh Rasmussen arrived in the Libyan capital of Tripoli at the end of seven full months of the military bloc’s war in the country and effused: “It’s great to be in Libya, free Libya.”

Like Scipio Africanus the Younger almost twenty-two centuries earlier in what is now Libya’s western neighbor Tunisia, then Carthage, Rasmussen planted the banner of a conquering power on the soil of North Africa. Perhaps NATO will grant Rasmussen, too, the honorific agnomen Africanus after the military bloc’s first war and first conquest on the continent.

While basking in the triumph of what Western commentators have celebrated as NATO’s first complete and uncontested military victory – “the most successful in Nato history” in Rasmussen’s words – in the Libyan capital, the secretary general was questioned by a reporter about plans to replicate the Libyan model in Syria and stated: “My answer is very short. NATO has no intention (to intervene) whatsoever. I can completely rule that out.”

However, to belie his claim he immediately added: “Having said that, I strongly condemn the crackdown on the civilian population in Syria. What has happened in Libya sends a
clear signal. You cannot neglect the will of the people.”

The 227-day war against Libya waged first by U.S. Africa Command from March 19-31 and thereafter by NATO is, according to the NATO chieftain, “a clear signal” to Syria, but “NATO has no intention” to commence military actions against Syria. Scant assurance to the nation’s government and populace alike, to be sure.

On the day Muammar Gaddafi was brutally killed, Senator John McCain, ranking member of the Senate Armed Services Committee and presidential candidate in 2008, threatened the president of Syria, the prime minister of Russia and unnamed Chinese leaders with the less than eloquent admonition that they “got a reason to be uneasy” according to one account. He told the BBC on October 20: “I think dictators all over the world, including Bashar al-Assad, maybe even Mr. Putin, maybe some Chinese, maybe all of them, may be a little bit more nervous.” He repeated the parallel between Libya and Syria three days later while in Jordan.

Had Rasmussen been someone other than who he is, which is to say an honest individual, his comments in the Libyan capital would have been limited to the line of Tacitus about a Roman campaign in the century following the Third Punic War: Auferre, trucidare, rapere, falsis nominibus imperium; atque, ubi solitudinem faciunt, pacem appellant. (They plunder, they slaughter, and they steal: this they falsely name Empire, and where they make a wasteland, they call it peace.) Libya has been destroyed. What is left of the city of Sirte presents a vivid image that suits all too well the Roman historian’s words.

Back at home in NATO Headquarters in Brussels three days later, Rasmussen gave his latest monthly press briefing, in which he stated:

“Let me stress that NATO has no intention whatsoever to intervene in Iran, and NATO is not engaged as an alliance in the Iran question.”

He began his comments with this account: “This week I had the privilege to visit Tripoli, the capital of free Libya. It was the first time ever that a NATO Secretary General set foot in the country and something none of us could have imagined only a year ago.”

During the question and answer period which succeeded his presentation he responded to a question on Libya by stating:

“We would be prepared to offer the same kind of assistance as we have offered to other partners within defence and security sector reforms. That is, overall to help put defence and security agencies under civilian and democratic control. We can also help in organizing a modern defence, modern structures. In more specific terms we can help when it comes to institution-building like the building of a defence ministry, how to organize General Staff of the Armed Forces, just to mention some examples.

“NATO has a lot of expertise within defence and security sector reform, and actually a number of our Allies have gone through a similar transition from dictatorship into democracy, so they have a very valuable experience to offer. And I talked with Chairman Jalil and made clear that we are ready to assist Libya within such reform efforts if requested…”

Given the alliance’s history over the past twenty years, what he in fact pledged was that NATO will train – from scratch and in English – the armed forces of the new Libyan proxy regime as it has done previously and is still engaged in doing in other nations and provinces it has invaded and in other manners subjugated: Bosnia, Kosovo, Macedonia, Afghanistan and Iraq.

Libya, which until now has been the only North African nation not to be pulled into NATO’s Mediterranean Dialogue military partnership – Egypt, Tunisia, Morocco and Algeria are members as are Israel, Jordan and Mauritania – will become the eighth member and a joint asset of NATO and U.S. Africa Command.

The chief of what is not only the sole extant military bloc in the world but the largest and longest-lived multinational armed alliance in history may have taken to issuing regular disclaimers concerning attacking new nations well outside the so-called Euro-Atlantic zone, but how much credence the secretary general’s pronouncements should be given is best indicated by how unconscionably NATO lied its way into full-fledged wars in three continents over the past twelve years.

With 28 full members at present, after a 75 per cent increase between 1999-2009, and over 40 partners around the world, the North Atlantic bloc has integrated the militaries of a third of the world’s nations for deployments to war and post-war zones in the Balkans and South Asia, with Africa the next destination.

Its latest trophy is the battered, bloodied and brutalized body of Muammar Gaddafi, murdered after a U.S. Hellfire missile and French laser-guided bombs struck his convoy outside Sirte on October 20, eight months before what would have been his seventieth birthday. So bereft of the most elementary notions of decency and values, moral and aesthetic, are the governments of the West and the people they deserve (as a British writer a century ago reversed the well-known dictum of Joseph de Maistre), that the only stimulants left to awaken their satiated and dehumanized sensibilities are – as they are inured to violence, even on a mass scale – necrophilia and fiendish, ghoulish Grand Guignol. The lower tier of American culture, mass-market escapist entertainment, is consumed by a fascination with vampires, flesh-eating zombies and the like and graphic depictions of foreign leaders and former leaders being mauled and murdered are simply more lurid diversions for jaded ennuyés.

In reference to the murder of Gaddafi and his son Muatassim, the public display of their corpses and the sports enthusiast-like celebration of those gruesome acts by the likes of U.S. Secretary of State Hillary Clinton, Russian representative to NATO Dmitry Rogozin lambasted them as emblematic of sadistic triumphalism, Prime Minister Vladimir Putin denounced them as disgusting and Deputy Speaker of the State Duma Ivan Melnikov characterized the first as “a striking illustration of American and their NATO allies’ policy in the North-African country,” according to Interfax in the third instance.

They are in fact grotesque, in the sense that Hegel defined the word, as the idealization of the ugly.

In his own words, the last-cited Russian official warned: “I think that the entire world should watch today the published photographs and video records of Gaddafi’s murder. It is not just a dead former leader of Libya. It’s the symbol of the sovereignty of an independent country that was torn to pieces by Americans.”

The day after Gaddafi’s murder the same news agency cited another deputy of the lower house of parliament of the same, Communist, party, Vadim Solovyov, as affirming: “The American economy is in need of inexpensive oil, so the U.S. government is even ready to wage wars, if only oil arrives…Any country with large reserves of energy resources – Iran, Syria, Venezuela or Nigeria – could come next.”

NATO ground, air and naval forces continue their murderous rampages in Afghanistan, across the border into Pakistan, in Kosovska Mitrovica, in Libya and off the coast of Somalia in the Gulf of Aden and adjoining waters (where NATO killed the captain of a Taiwanese fishing vessel and wounded two Iranian fishermen in separate attacks earlier this year).

In the interim the Obama administration announced the deployment of special forces to four of the above nations and on the day of Gaddafi’s murder the chairman of the Senate Foreign Relations Committee’s subcommittee on African affairs, Senator Chris Coons, was reported by Associated Press as asserting that “Moammar Gadhafi’s death and the promise of a new Libyan regime are arguments for the measured U.S. military response in central Africa where the U.S. has sent roughly 100 troops” to Uganda, Congo, the Central African Republic and South Sudan.

That the nations of the world require almost daily assurances, however untrustworthy, that they will not be attacked by the mightiest multinational military formation in history is an indictment of the age that submits to living under such ongoing and ubiquitous threats. The time is ripe and in fact long overdue for issuing a call for an international anti-NATO initiative addressed to individuals, organizations, political parties and governments to convene an extraordinary session of the United Nations General Assembly to demand the disbanding of the North Atlantic Treaty Organization as a – as the gravest – threat to world peace.