To this day, 9/11 mythology remains official dogma on air and in print. As a result, most Americans remain unaware of the biggest lie of our time and its horrific consequences, touching their lives directly.

Sunday marks the 10th 9/11 anniversary. As on previous anniversaries, the media cover everything except what Americans most need to know - the truth. 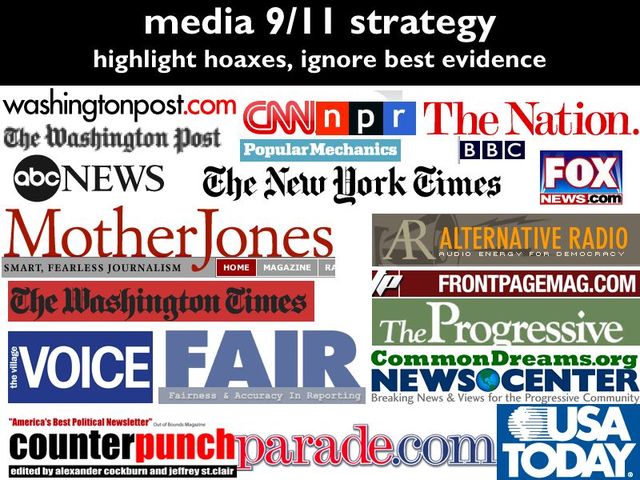 
In February 2003, a Florida Court of Appeals unanimously ruled for Fox News, saying no rule or law prohibits distorting or falsifying news.

At first, the station loved them. Later, however, Fox executives and their attorneys ordered its reporters to admit falsifying evidence and produce bogus reports on BGH safety.

They refused, threatened to inform the FCC, were fired, and sued. A district court jury decided on their behalf, awarding Acre alone $425,000 in damages.

In other words, Fox simply followed "policy" entitling its stations to lie - whether on product safety or falsifying facts about anything, including 9/11 truth.

In 2005, Project Censored chose this story among its top 25 most important, titled "The Media Can Legally Lie," and lie they've done about 9/11 from that day to the present.

Those old enough to remember won't forget, including how media distortions turned it into perhaps the most hyped ever spectacle, especially on television.

For days, images of planes hitting the twin towers and their collapse were aired repeatedly.

A personal note. I was in a doctor's waiting room with others watching events on television. When the South Tower collapsed, everyone audibly gasped, unaware as I was how or why, let alone what lay next.

When the North Tower collapsed 30 minutes later, unsettling thoughts crystallized enough to make me sense much more was involved than met the eye or what news reports claimed.

Later she claimed she didn't "remember minute-by-minute what she saw," or perhaps (like BBC's management) doesn't want to explain how she could report an event before it happened without advance knowledge.

Earlier in the afternoon, I smelled a rat and wrote my brother, saying: "They're drinking champagne in the White House tonight," precise words I'll never forgot. Yet they failed to imagine the horror-filled decade to come.

Back then, the whole world watched the horrific spectacle, including planes hitting the towers, both bursting into flames, desperate people jumping out of windows to avoid incineration, and then collapse at near free-fall speed, later proved (but unreported) by controlled demolitions.

A 2002 HBO film titled, "In Memoriam" called 9/11 "the most documented event in history," stopping short of revealing what really happened or why.

It provided a collage of images produced by news crews, filmmakers, amateur videographers and photographers, some of them risking their lives by so doing.

For three or more days, US television covered the event and its aftermath nonstop commercial free. In the process, they hyped war hysteria belligerently.

On October 7, 26 days later, it began against a nation having nothing to do with the attack. However, falsified reports held Osama bin Laden responsible. Later, the FBI admitted no evidence linked him to the incident.

Nonetheless, Washington demanded Taliban authorities extradite him. They, in turn, rightly wanted proof of his culpability.

None, of course, was provided to let the Bush administration go to war on false pretenses. March 2003 against Iraq followed.

Both wars rage today, besides Obama's naked aggression, notably against Libya - another nonbelligerent country America and its NATO allies systematically destroyed, butchering tens of thousands of Libyans on the pretext of protecting them.

America's post-9/11 decade is best called its visible fall from grace, waging permanent wars on humanity for wealth and power, never for falsified hyped reasons everyone needs to understand and condemn.

Absent was critical debate. Vital questions weren't asked. Militarism instead was promoted as the solution to "global terrorism."

For days, political and military officials and spokespersons shared air time with so-called national security state experts and various crackpots, ranging from right-wing to hard-right to the lunatic fringe.

The common theme argued was that America was at war with Islam, Samuel Huntington's racist "clash of civilizations" notion, "good v. evil," "freedom (and our) way of life" against "forces of darkness."

Their underlying theme was fear because it sells, even when cause for it doesn't exist.

At the same time, Bush's "war on terrorism" didn't mention democracy, instead emphasizing his fighting for "freedom" mantra, no matter the human toll or illegitimacy of the Big (9/11) Lie, permitting America's war on the world to follow.

Inaugurated on January 20, 2001, his nationally televised address to Congress declared war on terrorism, describing a conflict between "those governed by fear (who) want to destroy our wealth and freedoms" and others wanting to defend it.

In other words, wars of aggression are liberating ones. Civil and human rights are suppressed for our own good, and patriotism means going along with lawless governments, committing crimes of war and against humanity against one country after another.

An earlier article explained that when America goes to war, managed news follows, spreading rumors, half-truths, misinformation, and willful deception about targeted nations, regimes, leaders, and other enemies, whether despots of democrats.

John Pilger said "Journalism is the first casualty" of war. "Not only that: it has become a weapon of war, a virulent censorship (and willful misreporting) that goes unrecognized in the United States, Britain and other democracies; censorship by omission (makes all) the difference between life and death for people in (targeted) countries...."

It suppresses debate, substitutes fiction for facts, filters out truth, and cheerleads in lockstep with government policy, right or wrong.

As a result, it supports America's right to be judge, jury and executioner, as well as get victor's spoils because that's why all wars are fought, never for falsified reasons, regurgitated on air and in print ad nauseam.

Because America's business is war, supported by its major media, war profiteering is a growth industry, and as famed comedian Jimmy Durante used to say:

"Everybody wants ta get inta da act," and they do.

In addition, not telling the truth and holding venal politicians accountable for taking America to war on false pretenses lets them do it again with impunity.

At best, damage control tactics follow, including Bush officials relying on 9/11 Commission liars to let them off the hook by sanitizing policy and concealing facts.

David Ray Griffin brilliantly exposed them in his book titled, "The 9/11 Commission Report: Omissions and Distortions." He explained that Bush officials "deliberately" failed to prevent the attacks or, in fact, were "actively involved in (their) planning and execution...."

His introduction calls his book important because of the significant consequences of 9/11, taking America to war on false pretenses, and its major media lying about it supportively.

His reasons for wanting to examine the 9/11 Commission's report included:

-- to determine if Bush's "war on terrorism" response to 9/11 was appropriate;

-- to learn if the Commission's account was "definitive;" and

-- "whether the success of the attacks would have been less likely if the recommended structural changes had already been in place."

A fourth reason was the "possibility of a cover-up," and indeed that's precisely what happened. Instead of "provid(ing) the fullest possible account of the events surrounding 9/11," damage control suppressed them.

The Commission, of course, was hardly "nonpartisan," "impartial," or "thorough," especially with Philip Zelikow as executive director, a Republican Bush administration member at the time, appointed to assure whitewash, not full disclosure.

In his exhaustive account, Griffin brilliantly, "painstaking(ly) and devasting(ly) demoli(shed)" the Commissions findings, according to Peter Dale Scott.

Though Griffin didn't address America's media, he nonetheless exposed its complicit role. They regurgitated Commission lies as truth, the way they always represent powerful interests at the expense of good journalism, commentaries and full disclosure.

To this day, 9/11 mythology remains official dogma on air and in print. As a result, most Americans remain unaware of the biggest lie of our time and its horrific consequences, touching their lives directly.

Sunday marks the 10th 9/11 anniversary. This writer plans two more articles about the big lie and its aftermath to be published on or about the date.

On September 10 and 11, the Progressive Radio News Hour will feature more discussion on it, especially its horrific consequences.

"After 9/11, security guard on high alert," against what wasn't explained.

"Brought together by catastrophe," focusing on marriage vows exchanged, not 9/11 truth.

"Twin misses his other half," killed in the attack on the Pentagon, instead of explaining the toll on millions of dead Afghans, Iraqis, and their families, their countries destroyed by US lawlessness.

"Trying to find the new normal," about a wife coping in the aftermath of her military husband's death, again ignoring a global catastrophe because of America's post-9/11 wars.

Coverage of its 10th anniversary will walk "a fine line between commemoration and exploitation. Mindful of this, television networks and magazines and others planning special coverage....are approaching it differently," some commercial free.

Unfortunately, freedom from truth already is featured. Neither writer explained, instead saying news outlets will vary in their approach with special print and on air specials.

As on previous anniversaries, they'll cover everything except what Americans most need to know - the truth.