The Home Office are set to deport Justice Charles to Sierra Leone tomorrow, even though he is married to a British citizen, has lived in the UK for 10 years and will not be able to get the health care he needs in Sierra Leone. 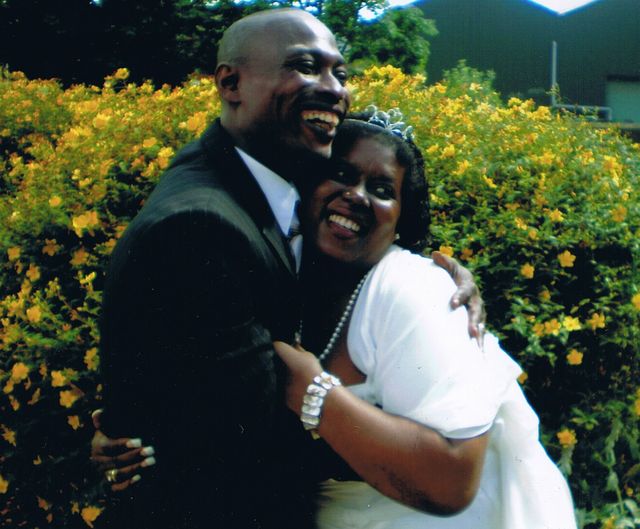 Justice and Ruby on their wedding day

It is now just sixteen hours before Justice Charles will be forced against his will to get on a plane to Sierra Leone, leaving his wife Ruby behind in Sheffield. Despite urgent calls to the Home Secretary, Theresa May MP, no response has been made from the Home Office. The plane departs from Heathrow at 13.40.

Today his wife Ruby made the difficult trip to London to visit Justice in Colnbrook Immigration Removal Centre. Ruby suffers from lupus and is in constant pain, but her love for Justice meant she had to go and see him. Now she does not know when she will see him again. She has pledged that if Justice is deported she will follow him, but this will mean having to leave her children and grandchildren. Ruby has no idea how she would raise the money for the fare, or how they could start a new life in Sierra Leone, where they would have no home or medical support. Indeed the mental health facilities in Sierra Leone are extremely primitive. One psychiatric hospital serves the whole country and some patients are chained up to prevent them self harming. Justice suffers from post traumatic stress following his terrible experiences during the war in Sierra Leone and has attempted suicide on three occaisions.

This is from the 2010 Human Rights Report

http://www.state.gov/g/drl/rls/hrrpt/2010/af/154368.htm
There is considerable stigma associated with and discrimination against persons with mental health issues. The Sierra Leone Psychiatric Hospital in Kissy, the country's only in-patient psychiatric institution, had beds for 400 patients but housed only 100 patients due to staff and resource constraints, as the hospital was poorly funded by the government and received only small donations from private charities. Patients were generally released to their families or communities as soon as possible, and received follow-up counseling on a regular basis. The hospital estimated that 550,000 citizens needed some form of psychiatric care due to post-traumatic stress disorder arising from the 1991-2002 civil war, depression due to socio-economic problems, and drug abuse. Men and women were housed in separate wards, and there was no mingling between the sexes. The hospital lacked adequate beds and mattresses which are easily destroyed by the patients and could not provide sufficient food to sustain them. Patient restraints were primitive due to lack of resources. The hospital did not have running water and only sporadic electricity due to lack of funds to buy fuel for the facility's generator. Basic medications were available, although the hospital suffered from a lack of a variety of drugs targeted at specific problems.

Campaigners were shocked today to hear that Justice Charles is to be deported to Sierra Leonne this Friday. His wife Ruby Charles who is a British citizen, is inconsolable. Ruby suffers from lupus and relies on Justice to care for her. Ironically, if the deportation does go ahead, the state will be worse off as they will have to pay for a carer for Ruby. Despite the dangers of Sierra Leonne, where Justice was attacked by rebels, Ruby says that if he is deported she will go too. She said "I love my husband and I can't live without him. If they send him back to Sierra Leonne I will follow him."The couple have been married for 3 years and live together in a house in Highfield that has been regularly monitored by the authorities. "How can they say this is a sham marriage, when they know very well we are living together here? They even called once in the early hours of the morning and found us in bed together. We have given them all the evidence they need and Justice has always cooperated with the authorities. I can't understand why they are treating us like this. The stress is making me physically shake."

Justice himself is not well as he suffers from post traumatic stress, flashbacks and anxiety as a result of his terrible traumas in Sierra Leonne.

Supporters are urged to contact Theresa May, the Home Secretary, at

Asylum Seeker Justice Charles and his British wife Ruby are in absolute despair since Justice's arrest this morning. The Home Office have accused him of being in a "sham marriage" to Ruby Senior, who he met in 2003 and married in 2008 and are saying he must leave his wife want to deport him to Sierra Leone.

Green Councillor Jillian Creasy has commented on his on-line petition "As a local councillor I can vouch for Justice and his genuine and supportive relationship with his wife, Ruby. It would be a travesty for him to be deported."

MP Paul Bloomfield has written to the Home Office supporting Justice's claim for leave to remain in this country.

Local vicar Julian Sullivan has written an open reference, saying that he is convinced the marriage is genuine.

Justice Charles was attacked by rebels whilst delivering food aid with the UN in his home country of Sierra Leone in 1999. Injuries sustained in these attacks have been confirmed in medical reports. Justice continued to be threatened by former rebels following the ending of the country’s ten-year civil war in 2001 and fled to the UK the following year to claim asylum. Since 2003 Justice has been in a relationship with a British woman, and they married 3 years ago.

Ruby Charles has five children and two grandchildren from a previous relationship and suffers from lupus, rheumatism, arthritis, high blood pressure, depression and anxiety. She says that Justice ‘looks after my children like they are his own’ and that ‘I have never been happier since I met him. My life has changed and my happiness has come back. I cannot afford to miss or lose my husband because that would break our family apart.’ Dr Lisa Dunkley, Consultant Physician in Rheumatology, has written a letter to state her concern about the severe effect the threatened deportation is having on Ruby’s health. This has been particularly bad since she found him collapsed on the bathroom floor after an attempted overdose when he heard, in May, that his permission to appeal against the decision to deport him had been turned down.

Despite the Coalition Government’s support for ‘strong and stable families of all kinds,’ the Home Office claims that Ruby and Justice have only a ‘Marriage of Convenience’. The genuine nature of the relationship over many years is affirmed by local City Councillors and others including the Anglican Canon, Julian Sullivan,from St Mary's Bramall Lane, who had to ensure that all qualifying conditions were met before allowing the marriage to take place in his church. As a former Asylum Seeker Justice has no right to work and no recourse to public funds, yet he has actually saved the Government money because of the reduced financial support that Ruby gets because he is there to care for her.

e-mail the campaign at