After The Apocalypse: Screening on 5th of July

'After The Apocalypse', is showing at the Showroom Cinema, Sheffield on Tuesday 5th of July at 18.30.

It's a 65 minute documentary about a pregnant woman's battle to keep her unborn baby against the wishes of a hostile medical profession, in Kazakhstan. 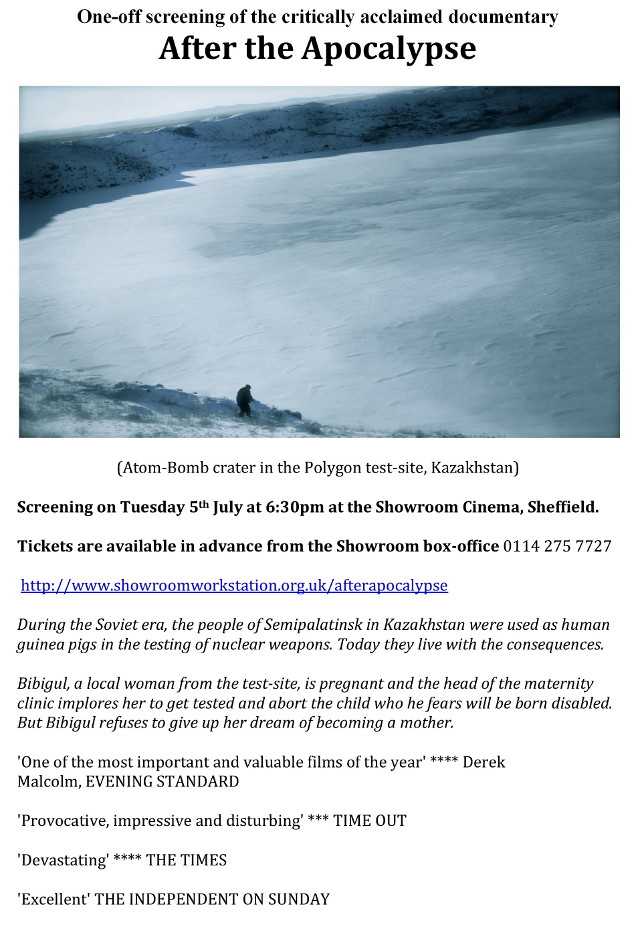 Bibigul is a young pregnant woman with what local doctors call a "frightful, defected face." She is the daughter of Biken, a deformed survivor of a Cold War experiment where 456 nuclear weapons were secretly tested on the population of Semipalatinsk, Kazakhstan. While the KGB encouraged locals to fish and swim in the radioactive crater lakes, their doctors analysed the results. Today, some of those doctors are still there, determined to use their results for good. Meanwhile sheep still graze on the craters and in the most affected villages 1 in 23 children are born with a birth defect. Confronted with the appalling legacy and convinced their ills are due to continuing background radiation and inherited radiation-caused genetic damage, the community is divided over what to do next.

Dr Toleukhan Nurmagambetov is the head of the city’s maternity clinic and wants the area's horrific cycle of birth deformities to end. His solution: a genetic passport which will prevent descendants of the original survivors carrying suspect genes from giving birth.

Bibigul is sent to Dr Nurmagambetov for further analysis, but despite Nurmagambetov’s judgement that the child will likely be born with Down’s syndrome and his pleas for her to get an abortion, Bibigul vows to keep her child. Convinced the area is in the midst of a “genetic apocalypse”, Nurmagambetov calls for the law to be changed. But are genetic policies that can only be described as eugenic really necessary? Will Bibigul’s child be born healthy or not?

The film refuses to take sides, leaving viewers wishing Bibigul and her family could have their way: let them at least be free to have their children and extend their families, whatever the risk. On the other hand, if we can prevent the creation of disabled children, should we not do that? If the idea of perfection is decided by whoever is in control, what progress can humanity make before we risk repeating the tragedy of where these ideas took us in the last century? This is the untold story of a great tragedy but leaves viewers disquieted about what should be done, both with the unexpected and long-lasting legacy of nuclear weapons, and with the power of the genetic manipulation that is at last beginning to come of age.