A Tribute to Anti-War Campaigner Brian Haw, Driven by Revulsion at the Murder of Innocents

When I was a child, I read the Guinness Book of Records, and marvelled at the stories of the people who, in ancient times, removed themselves from everyday reality, like Saint Simeon Stylites, a Christian ascetic who lived on a tiny platform on top of a pillar in Aleppo, Syria for 37 years in the 5th century AD. 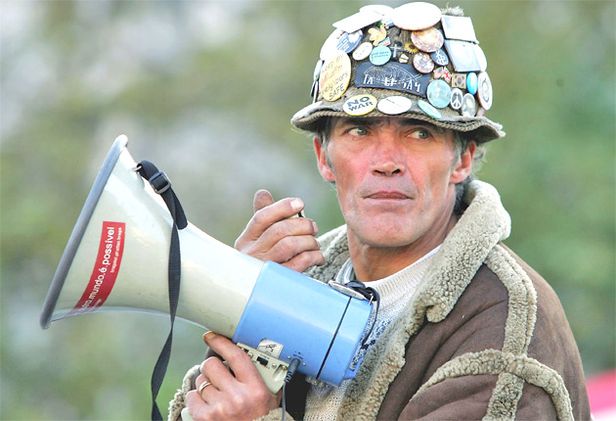 As I grew up, I continued to hear about people who had similarly removed themselves from the everyday world, and had come to be be regarded as prophets or as saints, appealing to those bound by the norms of everyday life - or in some cases vilified by them. However, they were always in countries that were not part of the so-called "first world," where dissent is tolerated only so long as it is toothless, and the authorities have no patience for anyone who would occupy a public place in pursuit of a higher purpose.

Nevertheless, on June 2, 2001, Brian Haw, born in Barking, Essex, who was married with seven children, and, at the time, was 52 years old, took up residence opposite the Houses of Parliament, initially protesting about the British government's involvement in the economic sanctions imposed on Iraq, which, he maintained, were responsible for the deaths of 200 Iraqi children per day.

After a long battle with lung cancer, Brian Haw died on Saturday June 18, but for ten years he maintained his protest, along the way becoming a hero for anyone not convinced that Britain, the US and other countries in the West should be engaged in perpetual war, in which hundreds of thousands of civilians have died.

At the time Brian Haw began his protest, no one knew that, within months, the 9/11 attacks would occur, a US-led invasion of Afghanistan would follow, and, in March 2003, the US - backed by the UK - would invade Iraq. As the death toll of innocents mounted, Brian's presence began to be perceived by many as an important reflection of the conscience and dissent that was brushed aside by Prime Minister Tony Blair when he ignored the largest protest in British history - involving two million people - a month before the Iraq war began.

Brian was unwilling to talk about his past but he was evidently driven by his faith. His father, a sniper in the Reconnaissance Corps, was one of the first British soldiers to enter the Bergen-Belsen concentration camp after it was liberated from the Nazis at the end of the Second World War. Haunted by what he saw, he committed suicide 20 years later.

This must have left a profound impression on Brian, and, along with his deeply-held Christian faith, drove him, after spending time in the merchant navy, running a removals business and working as a carpenter, to seek out his purpose confronting the warmongering of the US and the UK, and pointing out the excruciating human cost of war. En route to his calling in Parliament Square, he had visited Northern Ireland and Cambodia (in connection with the horrors of war that had afflicted both countries) and had also worked with troubled youngsters in Redditch, where he lived with his family.

From Parliament Square, he explained that he had left his family to campaign for other families suffering in war zones around the world:

I want to go back to my own kids and look them in the face again, knowing that I've done all I can to try and save the children of Iraq and other countries who are dying because of my government's unjust, amoral, fear- and money-driven policies. These children and people of other countries are every bit as valuable and worthy of love as my precious wife and children.

Despite drawing increasing support from the public, Brian was repeatedly targeted by the authorities, as his protest became more entrenched, filling the entire side of Parliament Square facing the Houses of Parliament with posters and banners opposing Britain and America's role in the world as mass-murdering warmongers.

In April 2002 Westminster City Council started legal action under the Highways Act, claiming that Haw was a "nuisance." That particular case never came to court, and the council also failed to establish that Brian's placards represented "obstruction" and "unlawful advertising," but by November 2004 the government became involved, when the Serious Organised Crime and Police Bill was introduced. Aimed specifically at Brian, it removed the right to protest, without the permission of the police, within a half-mile radius of the Houses of Parliament, and also showed up the hypocrisy of prime Minister Tony Blair, who, in April 2002, had said, "When I pass protestors every day at Downing Street … I may not like what they call me, but I thank God they can. That's called freedom."

The Serious Organised Crime and Police Act (SOCPA) was passed in April 2005, provoking widespread and creative dissent from numerous protestors, after two peace protestors, Maya Evans and Milan Rai, had been arrested for reading out, without prior permission, the names of British soldiers who had been killed in Iraq. However, the Act initially failed to restrict Brian's presence at all, because the High Court ruled that the legislation didn't apply to him because it dealt with authorising - or refusing to authorise - protests that had not yet taken place, rather than one that was already underway. Even in May 2006, when the Court of Appeal ruled that he would have to apply to the police for permission to continue his protest, that permission was granted.

There were conditions: the sprawling displays of the previous five years were restricted to an area just 10 feet wide, and on May 23, 2006, when Brian had failed to reduce the size of his display, the police launched a nighttime raid, seizing 90 percent of the placards and posters. Bizarrely, it was also claimed by MPs that he had failed to supervise the site of his demonstration with "diligence and care" to prevent terrorists from planting an explosive device.

In 2007, a judge found that there was no case to answer, and, that same year, Brian's largely destroyed protest was painstakingly recreated in Tate Britain by the artist Mark Wallinger, who entitled his Turner Prize-winning exhibition, "State Britain" (with the judges praising it for its "immediacy, visceral intensity and historic importance" and for combining "a bold political statement with art's ability to articulate fundamental human truths"). Brian also won a Channel 4 News Award for Most Inspiring Political Figure.

However, Brian's successful attempts at rebuffing the authorities suffered another setback this year. With the Royal Wedding as an excuse, the Greater London Authority secured permission to evict him and his supporters from the centre of Parliament Square, where, coincidentally, a community of protestors had established themselves around the time of last year's General Election. Later this year, Westminster Council hopes to bring the ten-year protest to an end by securing permission to remove Brian's fellow demonstrators from the pavement opposite Parliament.

I hope they don't succeed. Brian Haw's resistance to the casual horrors of British and American imperialism - and the victims of the legal wars of choice of the 21st century - was as inspiring as the activities of the pillar-dwelling ascetics I read about in my youth. Brian's chair stands empty tonight in Parliament Square, and if he is to be recognised in death as he was in life, then protestors will continue to exercise their free-born right to protest (if the wars and the deaths continue, as they will) and his chair will be immortalized and memorialized in Parliament Square, a reminder forever of the man who chose conscience over comfort, and, as a result, permanently showed up Britain's political leaders - and those of the US - for what they are: essentially, cold-hearted killers and false Christians.

Here is footage of Brian winning the Channel 4 News Award for Most Inspiring Political Figure in 2007: http://www.youtube.com/v/vKvhsJJBF-0.