Turkey’s final warning to Syria: Tomorrow may be too late for reforms

What is unfolding in Syria is an armed insurrection supported covertly by foreign powers including the US, Turkey and Israel. 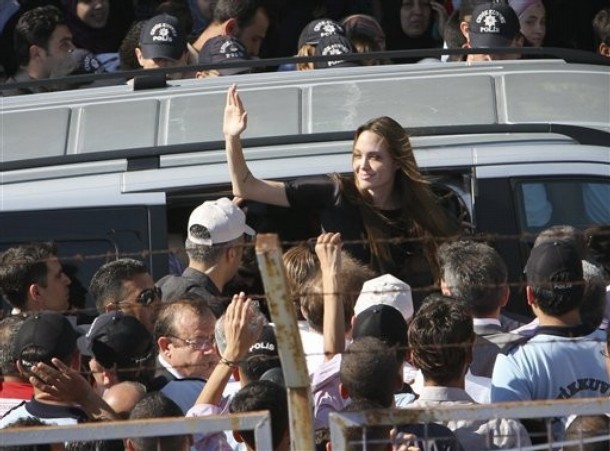 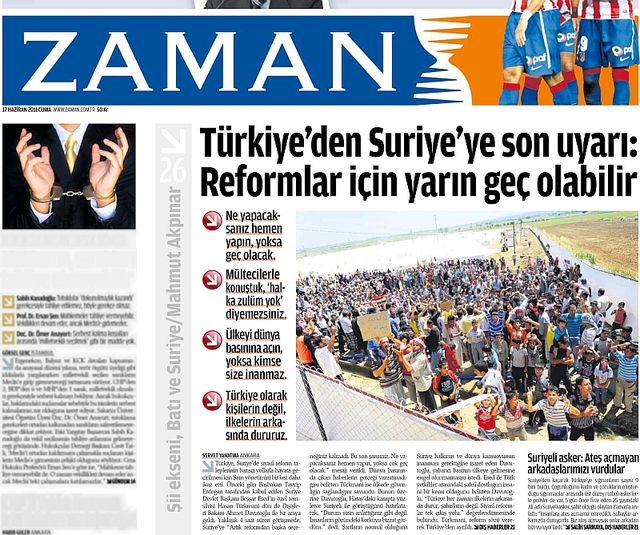 Turkey’s final warning to Syria: Tomorrow may be too late for reforms


Turkey’s final warning to Syria: Tomorrow may be too late for reforms

2) Turkey's Prime Minister Erdogan: Syria is not behaving in a humane manner (10 June 2011)


excerpts from: Turkey says Syria only has a few days left to get its act together

Turkey has delivered a blunt message to the Syrian leadership, saying the regime's willingness to undertake sweeping reforms in the unrest-laden country will determine the position of Turkey in the coming days, if not weeks, diplomatic sources told Today's Zaman. [...]

According to an incremental plan, Turkey will start supporting tougher UN resolutions if the regime fails to live up to the expectations of the international community.

The strongest message yet to the Syrian leadership was conveyed by Foreign Minister Ahmet Davutoğlu, who spoke with Syrian President Bashar al-Assad's special envoy, Hassan Turkmani, earlier this week.

“We underlined that Turkish support to Syria hinges on the willingness of the Syrian government to adopt sweeping reforms in the country. We detailed our suggestions before and even relayed a written proposal to Damascus on how they should proceed to stabilize the country,” the source explained.

“Actually, the situation in Syria is not exactly like the one in Libya. Syria is practically a domestic issue for us, I have said this many times. We have a [common] border that extends for 850-900 kilometres.

Currently there are [people] entering Turkey through the Altinozu [district]. [...] We really cannot close our gates to people fleeing for their lives and seeking refuge in Turkey. We have to let them in. But, of course, how long this will continue, that’s another matter. [...]

I say this clearly and openly, from a humanitarian point of view, his brother [Maher Assad] is not behaving in a humane manner. And he is chasing after savagery. Their appearance next to the women they have killed is such an ugly sight. These scenes are hard to stomach.

This [situation] is inevitably leading to the United Nations Security Council’s involvement and preparations are being made there as well. So, in the face of all this we cannot continue to support Syria. Because we do have relatives [living] there.”


Video of the interview (in Turkish):

Note: The excerpts above have been transcribed and translated from Turkish by Cem Ertür.

The Syria for Change conference, a three-day meeting held by opponents of the Syrian government in the southern Turkish city of Antalya, ended on Friday with the participants declaring their full support for the revolution and regime change in Syria.


excerpts from: Who cares in the Middle East what Obama says?

Turkish generals have thus prepared an operation that would send several battalions of Turkish troops into Syria itself to carve out a “safe area” for Syrian refugees inside Assad's caliphate. The Turks are prepared to advance well beyond the Syrian border town of Al Qamishli – perhaps half way to Deir el-Zour [...] to provide a “safe haven” for those fleeing the slaughter in Syria's cities.

Turkey may send its military forces into Syrian soil to establish a “buffer zone,” should the current unrest in Syria skyrocket into a refugee crisis that would pose a threat to Ankara, a report says.

Turkey's smear campaign against the Syrian government is much worse than the propaganda spread by Arab media to tarnish the image of Damascus with regards to its recent unrest.


The destabilization of Syria and the broader Middle East war

America's next war theater: Syria and Lebanon?
Washington's war against the Resistance Bloc

Syria: Who is behind the protest movement? Fabricating a pretext for a US-NATO “humanitarian intervention”

by Michel Chossudovsky, Global Research, 3 May 2011

by Stephen Lendman, SteveLendmanBlog, 2 May 2011

Libyan scenario for Syria: Towards a US-NATO “humanitarian intervention” directed against Syria?

Media disinformation: The protest movement in Syria Western media coverage of the events in Daraa


Turkey’s top officials: A new regime should be established in Libya

Turkish daily: Bunker to shelter Turkey’s top brass in the event of a nuclear war

President Gul: NATO missile plan is in line with our expectations

Once again, a CSIS report designates Turkey as the optimum route for a possible Israeli attack on Iran