Netanyahu’s speech to the US Congress: Racism, war-mongering and fabrication

Composed of roughly equal parts racism, war-mongering, fawning and fabrication, Israeli Prime Minister Binyamin Netanyahu’s speech before a joint session of the U.S. Congress on May 24 was received with adulation by the assembled Democrats and Republicans alike.

Netanyahu devoted a considerable part of his speech to a call for more aggressive action against Iran, which is surrounded by U.S. military power and has been subjected to several rounds of United States and European Union economic sanctions.

He called for a policy stipulating “that all options are on the table.” This position, shared by the Obama administration, is a coded way of saying that Iran could be the target of military attack, including the use of nuclear weapons. 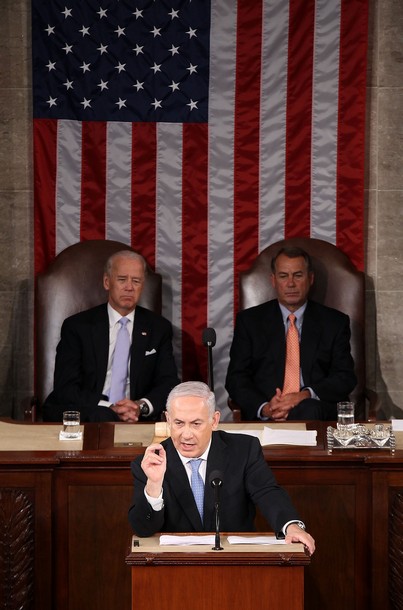 Netanyahu delivers a racist and warmongering speech to US Congress, 24 May 2011 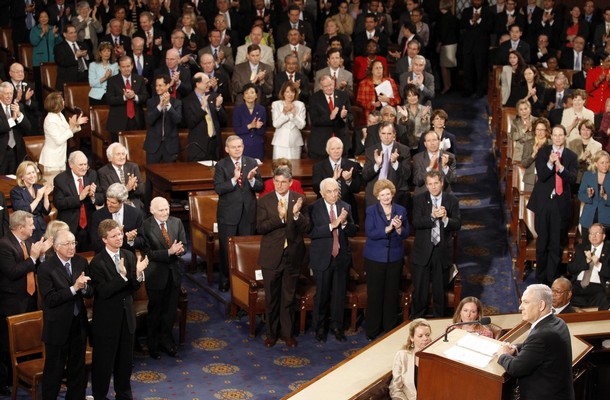 
Composed of roughly equal parts racism, war-mongering, fawning and fabrication, Israeli Prime Minister Binyamin Netanyahu’s speech before a joint session of the U.S. Congress on May 24 was received with adulation by the assembled Democrats and Republicans alike. The reception was very different in the Middle East. There it was widely understood – including inside Israel itself – as closing the door on negotiations and further isolating the Zionist state.

The day after the speech, Egypt's Foreign Minister Nabil El-Araby announced that his country’s border with Gaza would be permanently opened on May 28, a significant blow to the blockade of 1.6 million Palestinians that has been exacting a severe toll for more than four years. The ousted Mubarak regime had maintained the blockade in collaboration with Israel, the U.S. and the European Union .

Netanyahu’s colonial-style, anti-Arab racism was not even thinly veiled in his Congressional performance. He quoted the 19th century English author George Eliot, saying that Israel “shine(s) like a bright star of freedom amid the despotisms of the East.” He ludicrously claimed that of 300 million Arabs, “less than one-half of one percent are free and they’re all citizens of Israel.”

The “shining light” theme continued: “Israel is not what is wrong with the Middle East. Israel is what is right about the Middle East.” Repeating a tired Israeli mantra, Netanyahu repeatedly blamed the Arabs for all the conflicts in the region over the past six-plus decades, while asserting that, “We will never give up on our quest for peace.”

His attempt at a redo of history was unintentionally belied a sentence later by Netanyahu’s own words: “I remember what it was like before we had peace. I was nearly killed in a firefight inside the Suez Canal.” What was the future prime minister doing in the Suez Canal, which is part of Egypt, hundreds of miles from the claimed borders of Israel? He was a soldier in the Israeli military, which has repeatedly attacked and/or occupied Egypt, Syria, Lebanon, Jordan as well as Palestine since 1948. Such well-established facts did not deter another standing ovation.

Netanyahu devoted a considerable part of his speech to a call for more aggressive action against Iran, which is surrounded by U.S. military power and has been subjected to several rounds of United States and European Union economic sanctions. The leader of Israel, the only state in the Middle East which actually possesses nuclear weapons, said that “a nuclear-armed Iran would ignite a nuclear arms race in the Middle East.”

Taking a page from U.S. and British propaganda in the run-up to the 2003 Iraq war, Netanyahu lectured: “I want you to understand what this means. They could put the bomb anywhere. They could put in on a missile. It could be on a container ship in a port, or a suitcase on a subway.”

He called for a policy stipulating “that all options are on the table.” This position, shared by the Obama administration, is a coded way of saying that Iran could be the target of military attack, including the use of nuclear weapons.

The Israeli leader invoked the Torah as the basis of Israel’s right to all of Palestine. “No distortion of history can deny the four thousand year old bond between the Jewish people and the Jewish land.” In fact, nothing could distort history more than the use of religious scripture as a real estate document. Many peoples have inhabited Palestine over the past 4,000 years; for the past several hundred years until the 20th century European-based, Zionist settler project, the population was overwhelmingly Arab. Never mind, another standing ovation.

“In an unstable Middle East, Israel is the one anchor of stability,” Netanyahu claimed. In fact, since World War II Israel and U.S. imperialism have been the most profoundly destabilizing factors in the region, both relentlessly striving to prevent independent development.

Netanyahu mixed boot-licking with arrogant condescension, both of which would have been found insulting by a body any less craven than Congress: “Providence [God] entrusted the United States to be the guardian of liberty . . . Thank you for ensuring that the flame of freedom burns bright throughout the world . . . May God forever bless the United States of America.” A final standing ovation.

“We will be very generous on the size of a future Palestinian state,” Netanyahu proclaimed, calling on Palestinian Authority President Mahmoud Abbas, to “negotiate.” That these were nothing but empty words was as crystal clear as his preconditions on all the major issues:

* No return to 1967 borders. “The border will be different than the one that existed on June 4, 1967.” On June 5, 1967, Israel launched a surprise attack on Egypt, Syria and Jordan. Israel occupied the remaining 22 percent of Palestine – the West Bank, Gaza and East Jerusalem – as well as Egypt’s Sinai Peninsula and Syria’s Golan Heights. Netanyahu asserted the right of Israel to keep and expand its illegal settlements on stolen Palestinian land in the West Bank, and much of the Jordan Valley. “It is vital that Israel maintain a long-term military presence along the Jordan River.”

* No right of return for Palestinian refugees. By means of terror, 750,000 Palestinians were driven out to make way for the Israeli state in 1948, their homes, lands and other property confiscated. Today they and their descendants number more than six million, many of whom are still consigned to refugee camps. “This means that the Palestinian refugee problem will be resolved outside the borders of Israel,” stated Netanyahu.

* No to the return of any part of Jerusalem. East Jerusalem was illegally annexed to Israel after the 1967 war and then expanded to take in much additional West Bank land. All Palestinian parties call for Jerusalem to be the capital of a Palestinian state. “Jerusalem must never again be divided. Jerusalem must remain the united capital of Israel.”

* No to a Palestinian state that can defend itself. “So it is therefore absolutely vital for Israel’s security that a Palestinian state be fully demilitarized.” Thanks to hundreds of billions of dollars of U.S. aid, Israel is ranked as the 4th or 5th military power in the world.

* No negotiations at all with the Palestinians unless the recently signed Palestinian National Reconciliation Agreement is broken. “So I say to President Abbas, Tear up your pact with Hamas. Sit down and negotiate!”


The last point is the height of cynical maneuver. Above all, what Netanyahu wants is to continue the policy of talking peace while taking piece after piece of Palestinian land.

By setting pre-conditions that are impossible for the Palestinians to accept, he is attempting to make it look like they, not the Israeli side, are responsible for negotiations not taking place. To seal the deal, Netanyahu demands a breaking of the just-achieved Palestinian unity agreement which is supported by virtually the entire Palestinian population. It is at the same time a demand by one side to be able to designate who will represent the other side in negotiations – something no one, anywhere would accept.

But Netanyahu’s maneuvering, while hailed in the halls of Congress, has resolved nothing. It will likely lead to a deepening of the struggle in Palestine and the entire region which is in upheaval.

In his May 19 speech on the Middle East crisis, Obama sought to present the United States as a supporter of “democracy” and “self-determination,” including for the Palestinian people. That too was a maneuver, designed to strengthen the U.S. standing among people in rebellion, but it was effectively undercut by Netanyahu’s.

But neither maneuvers nor rhetoric can reverse the tide of history. Just like in South Africa, the Palestinian people – with the support of the Arab nation as a whole and all who stand for justice around the world – will overcome colonial occupation and win self-determination and the right of return.