Saturday May 21st saw the return of the Sheffield Anarchist Bookfair, now in its second year. This year it attracted over 250 people and throughout the day it had a good crowd of people attending meetings, watching films, hanging out in the cafe space and checking out a good range of groups and stalls. The venue was certainly an improvement on last year (we had day light and windows for a start!) and was decorated with loads of different banners, flags and posters brought by various groups on the day. 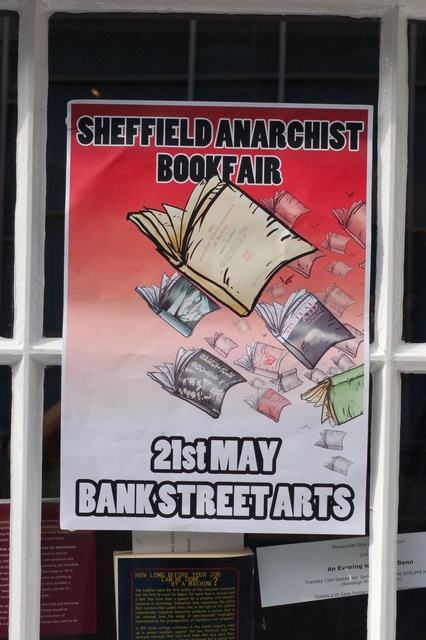 Throughout the day people enjoyed meetings on things as diverse as a planned LaDIYfest in Sheffield, Solidarity Unionism by Mutual Aid Sheffield, Anarchists against the cuts, Sheffield Social Centre planning meeting, an activist security/Hacktivism lab as well as a book launch from the Anarchist Studies Network and a meeting with Sheffield Indymedia (among others). There was also an extra last minute session hosted by 'No Borders Sheffield' making 12 meetings in total. Sheffield Indymedia recorded some of the talks and links can be found via links on the site. There were also 3 film showings throughout the day in the (very cosy) Cine Libertario showing films about anarcho syndicalism in Patagonia, recent events in Greece, and even footage from the 'Rage Against the Lib Dems' demo in Sheffield.

In the evening there was an after party/benefit at the Red House on Solly Street. There were 4 bands (Smiling Ivy, Banditos, Jezabellezza, Surviving Savannah) playing ska, funk, dub, punk, indie, rock etc as well as DJs playing Dub, Breaks, Jungle, Techno etc. The night attracted just over 100 people and packed out the venue with dancing, drinking, happy people who helped raise a significant amount of money for Mutual Aid Sheffield, a new initiative in the city to start a solidarity union similar to SeaSol (Seattle Solidarity Network) A big thank you to everyone involved in putting on the night!

There was a feature article posted before the event which linked to the agenda and other details. The feature about the 2010 book fair also linked to recordings made of the talks held in 2010.

The bookfair will return in late May 2012 for the 3rd year, watch this space!