The American Israel Public Affairs Committee (AIPAC) is "the most powerful and feared lobby in Washington." For years, it's "drawn on a well-organized, well-connected, highly visible, successful, and wealthy Jewish population," subverting potential opposition.

Obama's May 22 AIPAC speech affirmed rock solid support for a "strong and secure Israel," leaving Palestinians entirely out of his equation, despite paying disingenuous lip service to their interests. 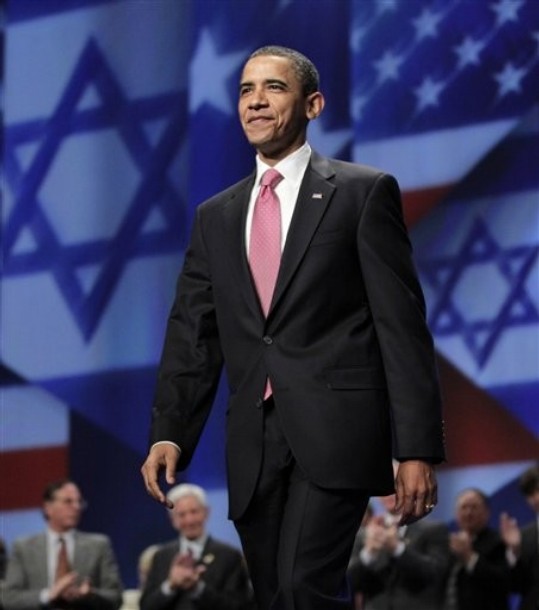 Obama arrives to speak at the AIPAC convention in Washington, 22 May 2011


The American Israel Public Affairs Committee (AIPAC) is "the most powerful and feared lobby in Washington." For years, it's "drawn on a well-organized, well-connected, highly visible, successful, and wealthy Jewish population," subverting potential opposition.

As a result, fear and respect "for AIPAC (exists) all over the country, but especially in Washington, where in a matter of hours, almost the entire Senate can be marshaled into signing a letter to the president on Israel's behalf. Who is going to oppose AIPAC and continue to have a career in Congress, or" to represent the Palestinian cause "when nothing concrete can be offered by that cause to anyone who stands up to AIPAC?"

Deferentially, each year, US politicians, including presidents, flock to its annual conference, paying homage to Israel and its influence.

Calling itself "America's Pro-Israel Lobby," it's represented Israeli interests since founded in 1953, then incorporated in 1963 as a division of the American Zionist Council (AZC), its precursor.

Exempted from registering as a foreign agent, it's had virtual fifth column veto power over war and peace, trade and investment, multi-billion dollar arms sales, and all Middle East policies affecting Israel under Democrat and Republican administrations alike.

"I find it absolutely astonishing, given that Palestinian policy has been essentially to throw our fate as a people in the lap of the United States without any strategic awareness of how US policy is in effect dominated, if not completely controlled, by a small minority of people whose views about the Middle East are in some way more extreme than even those of the Israeli Likud."

In fact, Zionist discourse in America reflects power, "and Arabs....are the objects of power - despised objects at that....To submit supinely to a Zionist-controlled (US) Middle East policy....will neither bring stability (for Israelis or Palestinians) nor equality and justice in the US."

As a result, today's status is what Said called "untrammelled immorality," a shocking disregard for the most basic sense of fairness - unrecognized, undiscussed and spurned in political and major media discourse. Instead, they focus solely on the interests of a rogue Israeli state - occupying, persecuting, and immiserating millions of Palestinians whose only offense is not being Jewish.

No wonder Obama's May 22 AIPAC speech affirmed rock solid support for a "strong and secure Israel," leaving Palestinians entirely out of his equation, despite paying disingenuous lip service to their interests.

No wonder also that an official AIPAC statement expressed gratitude for his assurance that Washington doesn't expect Israel to withdraw to June 1967 borders, besides explicitly calling Hamas a terrorist organization, ignoring its January 2006 electoral victory as Palestine's legitimate government.


-- the Convention on the Suppression and Punishment of the Crime of Apartheid (the Apartheid Convention), defined by the Rome Statute to include murder, extermination, enslavement, torture, arbitrary arrest, illegal imprisonment, denial of the right to life and liberty, cruel, inhuman and degrading treatment, and other abusive acts imposed by one group on another;

-- its decades of lawless occupation, aggression, and collective punishment;

-- explicit recognition of Palestinian self-determination under provisions of the December 1960 UN General Assembly Declaration on the Granting of Independence to Colonial Countries and Peoples, and all other UN resolutions affirming it;

-- the universally recognized right of return;

-- Palestinians denied access to their own land, air space, coastal waters, and control of their borders;

-- targeted assassinations and other killings;

-- apartheid settlements for Jews only, numbering 500,000 in the West Bank and East Jerusalem, illegally transferred to Occupied Palestine;

-- around half of the West Bank and East Jerusalem off limits to Palestinians, according to UN estimates, as well as denying them access to their own resources; and

The Gisha Legal Center for Freedom of Movement "promotes rights guaranteed by international and Israeli law." In May 2011, it published a "Gaza Cheat Sheet" account of what Gazans endure daily out of sight and mind in Washington and other Western capitals.

As a result, Israel created a humanitarian crisis, requiring aid for over 70% of Gazans. Moreover, Cast Lead destruction remains rubble. Vital needs go unmet. Around 95% of Gaza's industrial enterprises were impacted, suspended, closed, damaged or destroyed. The remaining 5% operate at from 20 to 50% of capacity. Lost jobs haven't been regained.

Aside from Gaza's tunnel economy to Egypt, vulnerable to Israeli bombing, Kerem Shalom is the sole crossing point to Israel for the limited amount of aid let in.

Excluded are goods and materials called dual use, basic construction materials like cement, steel and gravel (except for small amounts), spare parts, and other vital supplies to rebuild what Cast Lead destroyed. Overall, a small fraction of what entered freely pre-June 2007 gets in now.

Moreover, exports are largely banned, except for occasional small amounts of strawberries, flowers, peppers and tomatoes to European markets. On average, it's about two truckloads a day compared to 400 or more in 2005.

In addition, travel between Gaza and the West Bank is extremely limited via Erez crossing to Israel and Rafah to Egypt. In fact, only "exceptional humanitarian cases" are allowed with an emphasis on medical emergencies, and not many of them.

Travel to other areas is only possible through Egypt, with very rare exceptions. By controlling Palestine's population registry, Israel has decision-making power over passports, required to exit through Rafah. Since Mubarak's ouster, only about 300 a day now cross.

As a result, students can't study abroad. Families are divided, and commerce can't operate freely. Further, Israel prohibits access to and from Gaza by air or sea. Fishing is allowed only up to three nautical miles offshore, excluding most Gazan waters from use. In fact, under Oslo, 20 nautical miles were established.

In addition, a 300 - 1,500 meter no-go "buffer zone" exists along Israel's separating border fence, placing 17% of Gaza off limits and 35% of its arable land. Farmers daring to work it risk being shot and killed.

For many years, in fact, travel between the West Bank, Gaza, and East Jerusalem was highly restricted, preventing most Palestinians from doing it, let alone having access outside the Territories. In large measure, occupation, especially for Gaza, has meant imprisonment, unable to move freely as international law permits.

Moreover, the international community bears direct responsibility for letting Israel perpetuate this crisis by not imposing boycotts, divestments, sanctions and isolation until it ends.

Western nations literally let Israel get away with murder by spurning these principles.


Remarks by the President at the AIPAC Policy Conference 2011

[full transcript of President Barack Obama's speech at the AIPAC conference in Washington, D.C. on May 22, 2011]