The Obama administration and the corporate media are concocting an ever-more elaborate and spectacular theater around the “heroic” murder of the CIA intelligence myth/CIA asset Osama bin Laden. Not content to simply to exploit the 9/11 atrocity for political gain, the administration is heaping new layers of lie and cover-up to the original crime. 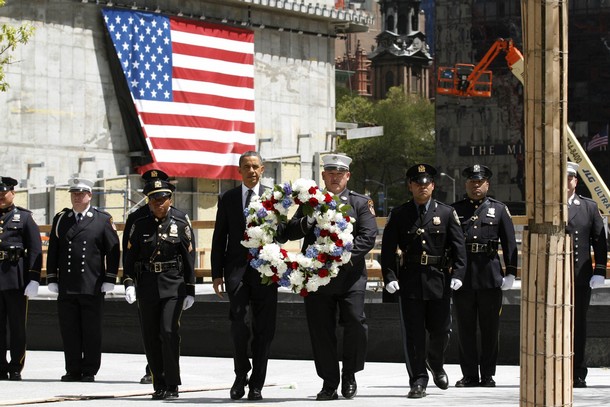 
The Obama administration and the corporate media are concocting an ever-more elaborate and spectacular theater around the “heroic” murder of the CIA intelligence myth/CIA asset Osama bin Laden. Not content to simply to exploit the 9/11 atrocity for political gain, the administration is heaping new layers of lie and cover-up to the original crime.

The desperation is palpable. Just days since the “big announcement”, Obama administration officials have already been forced to backpedal, issuing multiple corrections, adding to the confusion over the location of the killing, whether bin Laden was armed or unarmed, whether there was a “fire fight”, if an alleged wife was involved, the burial at sea, whether to release “graphic photos”, etc. The mainstream corporate media---following approved CIA/White House narratives---is spewing and regurgitating a tidal wave of red herrings that add to the inconsistencies.

Seasoned observers will not be fooled, no matter how many Obama lies, doctored photos, fake footage, lurid new testimonials and CIA pronouncements are pushed forth. As put simply by Paul Craig Roberts:

“As the alleged body has been dumped into the ocean, nothing remains but the word of the US government, which lied about Iraqi weapons of mass destruction and al Qaeda connections, about yellowcake, about Iranian nukes, and, according to thousands of experts, about 9/11. Suddenly the government is telling us the truth about bin Laden’s death? If you believe that, I have a bridge in Brooklyn that I’ll let you have for a good price.”

The “war on terrorism” is a fabrication, war propaganda that continues to serve as the eternal pretext for global resource war. That 9/11 was a false flag operation---that the official story is a lie and cover-up---has been definitively proven in numerous investigations, such as Mike Ruppert’s Crossing the Rubicon, Michel Chossudovsky’s America’s “War on Terrorism”, the work of Paul Thompson, and others.

Osama bin Laden is a product and asset of the CIA. "Al-Qaeda" is a covert operation, a "database" of intelligence legends, exhaustively detailed in the work of Chaim Kupferberg (Part 1 and Part Two). Pakistan’s ISI, a virtual branch of the CIA, was central to 9/11 and a player in subsequent “terror” operations. It is not surprising that Pakistan and the ISI is at the heart of the “death of bin Laden” as well.

The “death of bin Laden” changes nothing about the factual record that indicts (among others) Bush/Cheney, Anglo-American military-intelligence, and elite war/oil interests.

Tragically, none of this matters. The minority of individuals with unscrambled brains is not the target of this imperial charade.

To borrow from the lexicon of world planner Zbigniew Brzezinski, 9/11 was a successful attack “on the order of Pearl Harbor” that “united” the American people behind an “imperial mobilization”---the “war on terrorism” for oil. With 9/11, the masses fully supported nearly a decade of war, atrocities, subversion, and unprecedented government criminality.

The militant and unquestioning public embrace of “war on terrorism” lies underscores how that the 9/11 has succeeded beyond the wildest dreams of the Anglo-American war criminals who orchestrated it.

Now Barack Obama, who has spoken incessantly over the years about wanting to “unite” America again “just as it was after 9/11”, has been granted his moment to “unite” the masses again, but do an even better job of population control than Bush/Cheney (who, in their clumsiness and hubris, partially “squandered” their “political capital”). The swaggering Obama will “get it right”. He is a better actor, the more devious and mendacious corporatist who was selected for this specific purpose.

Obama has been itching to be the "Osama killer" since before he was elected.

The post-9/11 era has spawned an entire generation of vicious and ignorant drones, whose moral compass has been shaped by war, lies, violent entertainment, and brainwashing. The future American police state will be built upon this new culture of thuggery. This is "Obama's Animal Farm".

To Obama, this is “what makes America great”.

In Orwellian fashion, the legend of the death of Bin Laden changes nothing in reality, but turns the mass perception of this reality upside down.

Suddenly, an unpopular Obama and his failing presidency are recast, in true Bush/Cheney fashion, as a heroic---and now successful--- “war president”. He is now Obama the 9/11 avenger, protector of the American people, and the great military master.

This burnished new image, which is preposterous as the one given to George W. Bush during his reign of terror, grants Obama his own new “political capital”. Two years of flummoxing and failure, wiped out. Attacks from all sides, stopped. Obama has a political weapon to fend off attacks from the right-wing. They can no longer attack Obama for being weak on foreign policy. At the same time, Obama’s corporate liberals (who care only about gaining political points on the Republicans) can return to deluding themselves about Obama’s populism, appeal and effectiveness, despite two years of absolute failure and purposely broken campaign promises. With one stroke, Obama is being handed the 2012 election.

Suddenly, Obama is not only just as “great” as Bush, but an even “cooler customer”, who singlehandedly ordered and carried out a covert operation that Bush/Cheney could not.

(This writer had expected the “I Killed Osama” prize to be granted to Bush/Cheney. Apparently, their handling of Iraq/Afghanistan did not earn them the permission.)

What real objectives will be met with this new propaganda? As noted by Paul Craig Roberts:

“My initial interpretation of the faked bin Laden death was that Obama needed closure of the Afghan war and occupation in order to deal with the US budget deficit. Subsequent statements from Obama regime officials suggest that the agenda might be to give Americans a piece of war victory in order to boost their lagging enthusiasm. The military/security complex will become richer and more powerful, and Americans will be rewarded with vicarious pleasure in victory over enemies.”

Just as the Nixon administration declared a false “victory” in aborting the disastrous war in Vietnam, Obama can declare a similar “mission accomplished” with his “Osama Kill”. This will allow the administration to redeploying forces from Afghanistan to elsewhere in the region. Pakistan, Saudi Arabia and other critical oil-related geography remain in US cross-hairs. The new image of Obama the “heroic anti-terrorist” will convince at least some international leaders to cooperate with the administration. The mass resistance to the US-backed regimes in the Middle East, Africa and Central Asia will be at least partially neutered.

The CIA, soon to be under the command of Iraq/Afghanistan war criminal David Petraeus, is also given a new green light to continue their “war on terrorism” atrocities. This massive criminal mafia is viewed as a heroic protector of America.

A redeployment of forces back to the US is long overdue, for the continued buildup of "Obama's Animal Farm" within US borders. The militarization of the US homeland will be ratcheted up, in order to stop domestic unrest, union protests, and popular responses to the continuing collapse of the US economy.

“Al-Qaeda”, under new leadership, will be continue to be unleashed. The next phase of the CIA deception is likely to involve the legend of jihadists avenging Osama bin Laden, including, if necessary, “new 9/11s”.The so-called Al-Qaeda number two man, Ayman al-Zawahiri, who himself has “died” multiple times, will be the new boogeyman, along with other recently named "operational chiefs" such as Adnan Shukrijumah.

To add a grotesque and sickening final insult, the swaggering Barack Obama will grandstand at New York’s Ground Zero, in a staged celebration of a fictional murder, on the hallowed ground where thousands of people actually died at the hands of the US government and its covert operatives.

This act of exploitation will dispel all illusions about the criminal nature of this liar who has done Bush/Cheney one better by stooping even lower into the depths of depravity.

The original Big Lie gets its bookend Big Lie.