Cameron: There is no question of an invasion or occupation of Libya

Escalated intervention keeps incrementally building toward sending combat troops against Gaddafi, French and UK leaders signaling what may, in fact, have been planned all along, perhaps including US marines 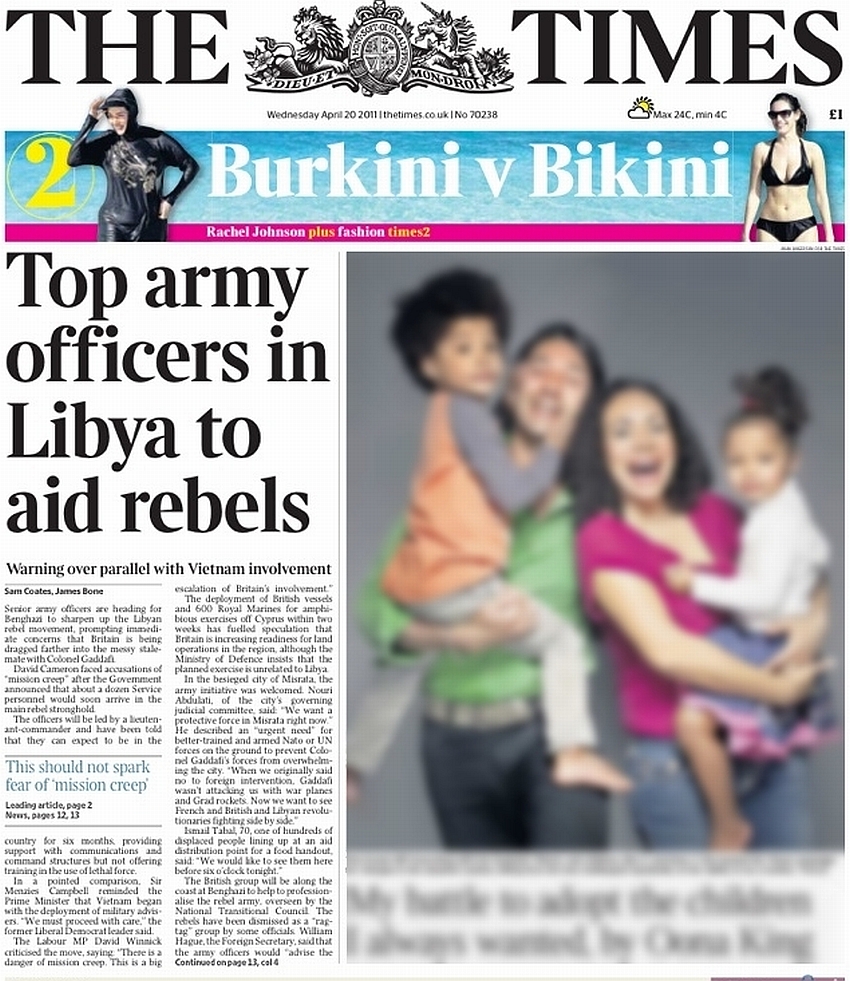 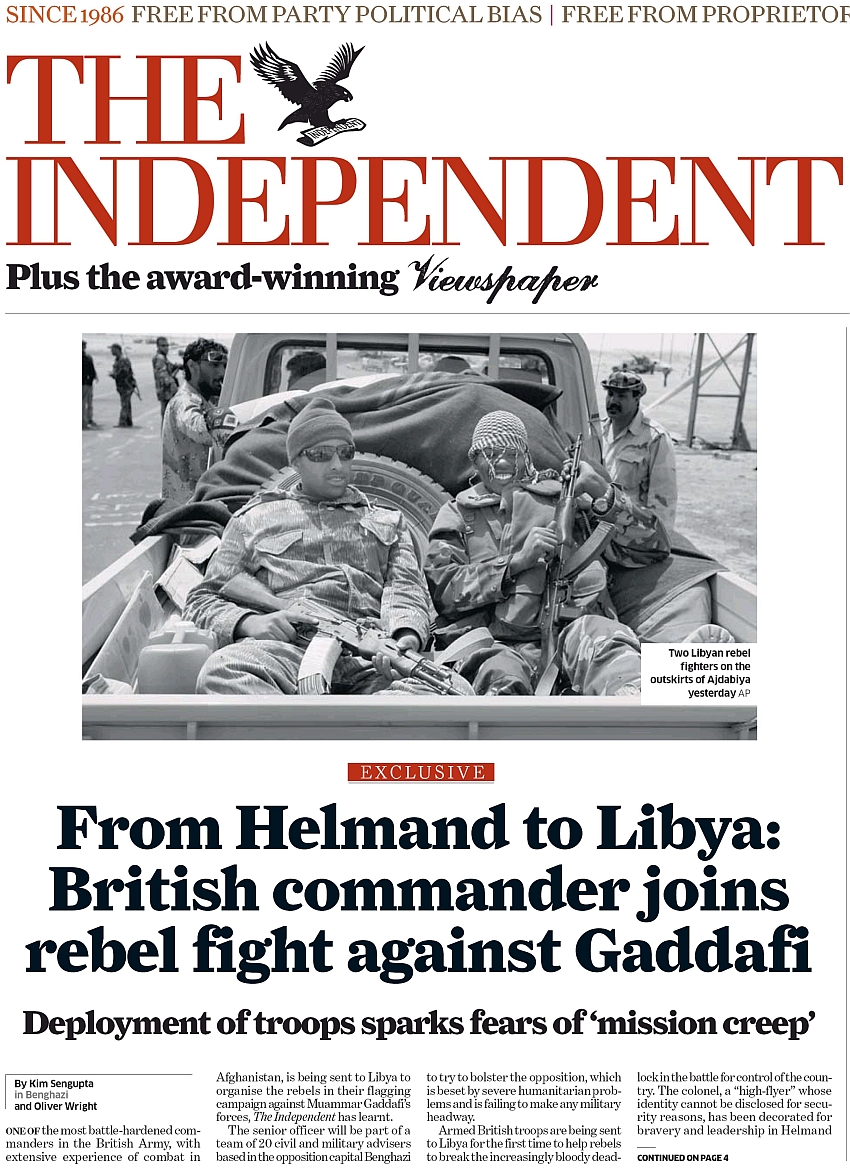 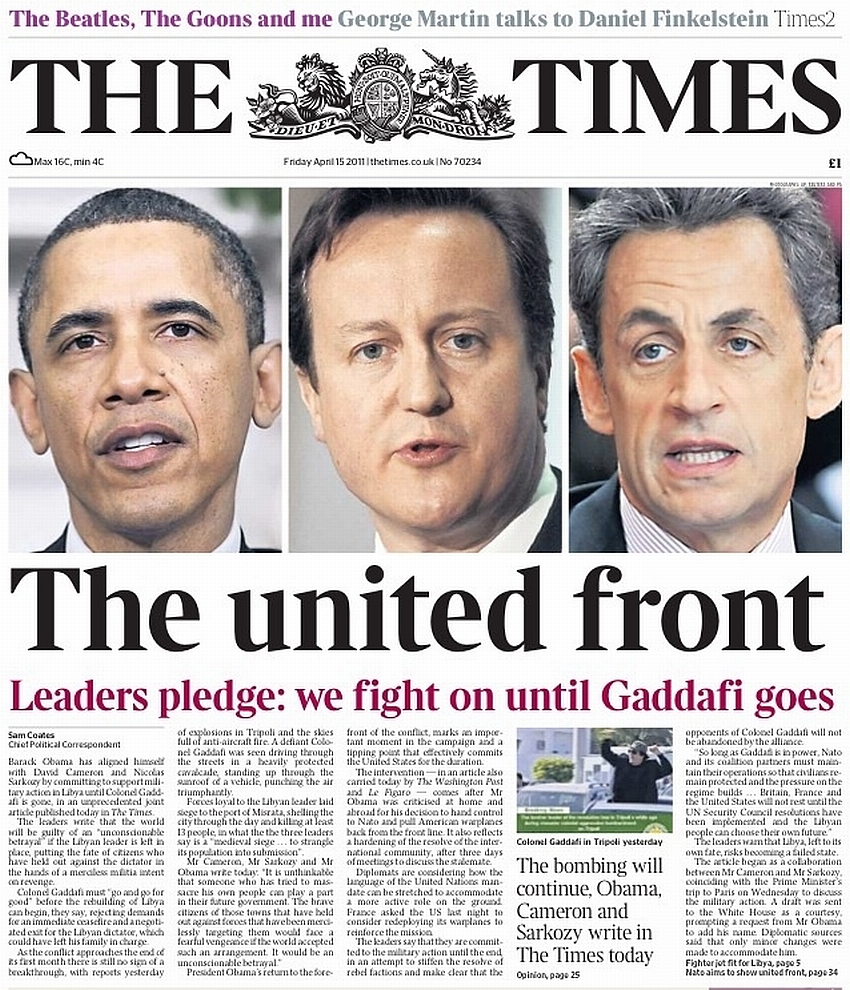 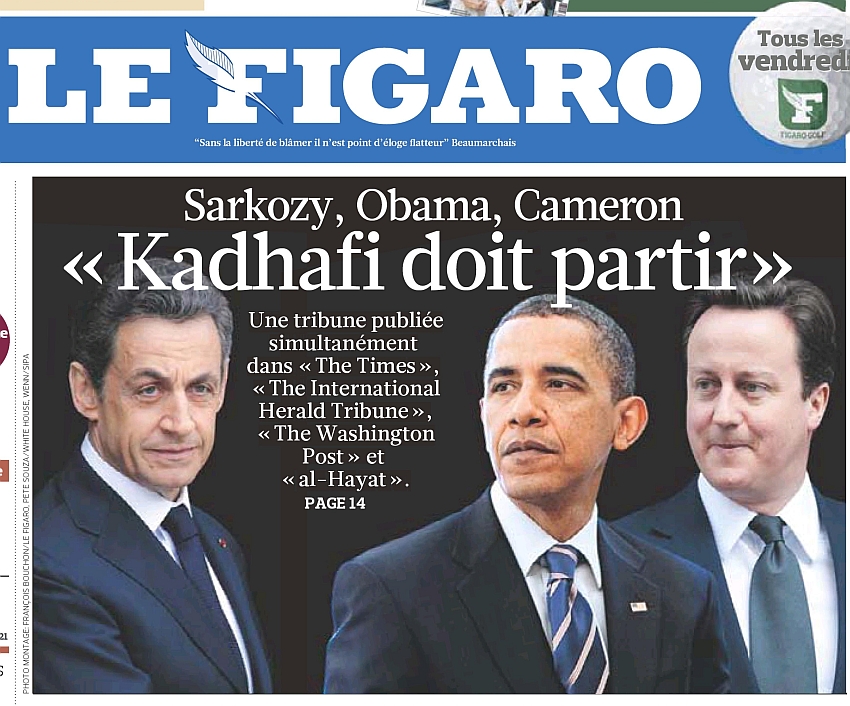 
UK Prime Minister: There is no question of an invasion or occupation of Libya

2) UK Prime Minister Cameron: There is no question of an invasion or occupation of Libya (17 April 2011)


excerpts from: Foreign Secretary announces assistance to the National Transitional Council in Libya

This contingent will be drawn from experienced British military officers. [...] In particular they will advise the NTC [National Transitional Council] on how to improve their military organisational structures, communications and logistics. [...]

This deployment is fully within the terms of UNSCR [UN Security Council resolution] 1973 both in respect of civilian protection and its provision expressly ruling out a foreign occupation force on Libyan soil. Consistent with our obligations under that Resolution, our officers will not be involved in training or arming the [Libyan] opposition’s fighting forces. Nor will they be involved in the planning or execution of the NTC’s military operations or in the provision of any other form of operational military advice.”

Murnaghan: [...] I say a year into the coalition, a year on, it’s almost like we’ve rewound in some aspects to 2003 in that we have a British Prime Minister, a US President and indeed others, talking about regime change in an oil rich Muslim country without full international legal cover.

Cameron: Well I would say there are many, many differences. First of all we have had two United Nations Resolutions about Libya and the second one specifically enabled us to do what we’re doing, put in place a no fly zone, put in place attack sorties to stop Colonel Gaddafi from murdering his own people. [...]

Cameron: That is right, the resolutions are about protecting civilians and enforcing a no fly zone and that is what we are doing but separately and politically, I think almost every political leader in the world bar about three have said that the future for Libya must be a future without Gaddafi. [...]

Murnaghan: Well it’s said, and I’m sure you’ve looked at it, that there is some wriggle room in that UN Resolution 1973 when it comes to forces on the ground there, that it talks about no occupation force but clearly looking towards Colonel Gaddafi. If it took ground forces, can you guarantee there would be no British ground forces employed?

Cameron: What we’ve said is there is no question of an invasion or an occupation, this is not about Britain putting boots on the ground, this is not what we are about here. What we’re doing is enforcing the [UN] resolution [...]

Murnaghan: [...] Could it ultimately lead to some form of on the ground invasion force – it doesn’t stay there, it’s not an occupation force but to fulfil the Resolution 1973 to protect those civilians, do you have to go further here militarily?

Cameron: [...] [I]n a way, Dermot, you’re right, it’s because we’ve said we’re not going to invade, we’re not going to occupy this is more difficult in many ways because we can’t fully determine the outcome with what we have available but we’re very clear, we must stick to the terms of the UN Security Council Resolution [...]

Murnaghan: So you are categorically ruling out putting any form of British troops, British forces, on the ground in the Libya?

Cameron: What I’ve said is there is no occupying force, no invasion, that is absolutely clear, that hasn’t changed right from the start, I said that and the position hasn’t changed.

Murnaghan: But it could be temporary?

Cameron: Dermot, I think I’ve answered the question and I’ve said this many times, there’s no change in our position. We are complying with the UN Security Council Resolution, we’re not occupying, we’re not invading, that’s not what we’re about and that is obviously a restriction on us but I think it’s the right restriction.

The bombing continues until Gaddafi goes
The Libyan leader will make his country a pariah state. To leave him in power would be an unconscionable betrayal (*)


“Our duty and our mandate under UN Security Council Resolution 1973 is to protect civilians, and we are doing that. It is not to remove Gaddafi by force. But it is impossible to imagine a future for Libya with Gaddafi in power. [..] It is unthinkable that someone who has tried to massacre his own people can play a part in their future government. [...] It would be an unconscionable betrayal.

Furthermore, it would condemn Libya to being not only a pariah state, but a failed state too. Gaddafi has promised to carry out terrorist attacks against civilian ships and airliners. And because he has lost the consent of his people any deal that leaves him in power would lead to further chaos and lawlessness. We know from bitter experience what that would mean. Neither Europe, the region nor the world can afford a new safe haven for extremists. [...]

[S]o long as Gaddafi is in power, Nato and its coalition partners must maintain their operations so that civilians remain protected and the pressure on the regime builds.”

(*) title of The Times’ print edition.

What next in Libya?


UK: Bombers who killed a policeman in Northern Ireland may have used explosives from Libya

UK minister: Britain at risk of a new Lockerbie

UK Prime Minister Cameron: We will use military force to free Libya