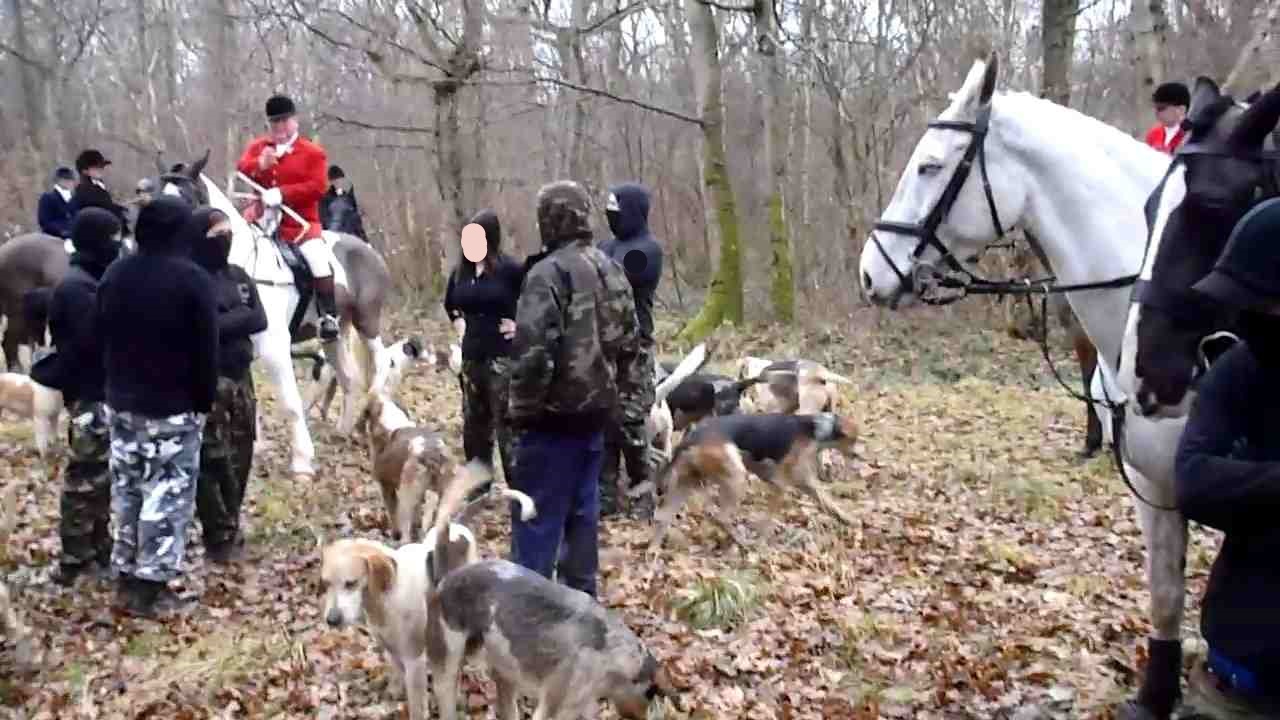 Sabbing in the North East & East Midlands this season has been fantastic. Numbers of sabs has gone through the roof – we're usually a 20-30+ strong group now, and when we've met with others from further afield there's been 60+ of us! The Manchester group has been revived and has become a strong ally in the battle to protect wildlife & we've even got a sizable Doncaster contingent now.

We've had many successful ventures into rural england this season. We've disrupted hunts every Saturday from Sept-March (provided the hunts have been out), plus several weekdays. We've been as far as Cumbria, the Cotswolds and Essex to help out fellow sab groups. We've saved numerous hares & foxes, stopped several dig-outs (www.diggingout.org/) & even sabbed some bird shooting. We've not seen or known of a single kill while we've been at a hunt or shoot.

We started off the season by disrupting fox cub hunting in Sept at the Badsworth & Bramham Moor hunt. Here, one adult fox was hunted into an earth where it could take sanctuary, as the hunt wouldn't have dared dig it out with us there, and we actively sabbed them all morning. We returned to the same hunt for our next two sabs only to be greeted by dozens of cops. Around 15 police vehicles were counted including an armed response unit. Arrests were made and CS spray was tested on sabs. But despite all this 2 young foxes were saved from the hounds!

Next up was the lesser sabbed Grove & Rufford hunt. Here the huntsman took one look at our brave crew, fled into a large wood and packed up after only a couple of hours.

Our next two jaunts found us in Lincolnshire, at the Blankney & Burton hunts. Both hunts move really fast but excellent tactics and tag teaming meant we stayed with them all day.

We next visited the High Peak Hare Harriers hunt. These tend to trail hunt when we attend and hunt hares when we don't. For them this means waiting around for a trail to be laid, a short gallop and then a boring wait for the next trail. In the huntsman's own words, it was like watching paint dry! No wonder they packed up early!

At the start of Nov we went back to the Grove & Rufford hunt with lots of new sabs. About two hours into a fairly uneventful day, we were kettled in by about 50 cops who held us for an hour and a half. This situation ended with 3 sabs being arrested, for alleged aggravated trespass, assault of a police officer & refusing to give details! We'll see what the courts think of it all soon and can't wait to see what evidence the cops come up with!

Next, we went North again to the Badsworth & Bramham Moor, and then to the Quorn hunt the following week. At the Quorn, three vehicles and lots of sabs had an amazing day of it. We kept the hunt moving, saving foxes that were thick on the ground throughout the day. Sabs particularly enjoyed watching blood pour from one redcoats' nose after he came off his horse... Karma perhaps?

At the start of Dec we returned again to the Badsworth & Bramham Moor hunt who were hunting on foot from their kennels in 18 inches of snow! Sabs were genuinely amazed to see the hunt out in such conditions, although not for long as they took one look at 25 sabs descending on them and packed up!

A rare trip to the Barlow (who don't normally hunt on Saturdays) followed. Conditions were extremely poor and the hunt didn't show up at their meet, but we soon found them lurking at their kennels, getting ready to hunt on foot. They were extremely unhappy to see us and attempted to intimidate sabs, but failing at this called in the police. Despite this we managed to disrupt the hunt by taking the hounds for a run, when they were right under the huntsman's nose! This made the hunt even more unhappy!

That Wednesday we visited the Blankney for their first hunt in six weeks (due to the weather). We stopped their terrier-men digging out a fox, even though they tried twice to return to it and continue! Needless to say, they gave up before we did.

After a few weeks off thanks to yet more snow, we sabbed the South Notts hunt, between Christmas and New Year. These are a violent bunch, but despite some ugly characters cruising around in pick-up trucks and amazingly heavy fog, we had a good day and the hunt only stayed out for 2 hours.

We had an almost disastrous day at the start of Jan, with 2 groups having vehicle problems, but still we managed a very decent sab at the Quorn hunt.

Next we went down to Essex to help out the local sabs. There we 60+ sabs out and we had a brilliant day, preventing 2 dig-outs and generally walking all over the hunt!

We were in Leicestershire the following week. Firstly we sabbed the Quorn hunt who pretty much rode straight back to their meet when we arrived. Then we went over to the Belviour hunt who haven't had any attention in a long time. They stayed out till after dark, and made attempts at proper hunting, but luckily no foxes were spotted or hunted. We also sabbed a crow & pigeon shooter this day, who was out shooting with his imaginary friend and who agreed with our views on shooting – very strange!

At the end of Jan we sabbed a pheasant shoot in Yorkshire. The shooters initially refused to stop aiming for the skies and threatened to beat sabs with guns, but, after a little persuasion they all packed up. Not one shot was fired and any pheasants that would have been shot that day can breathe easy for a bit, because it was the last weekend of the pheasant shooting season. We then went on to successfully sab the Badsworth & Bramham Moor who were hunting down the road.

At the start of Feb we visited the South Wold hunt who did their best to hunt and hide in woodland all day. We stuck with them though and made sure they couldn't kill.

On Feb 12th some of our number visited the High Peak Hare hunt locally and some travelled to Cumbria. It was the first time we had seen the High Peak hunt properly hunting. Although trail layers were present, they weren't seen much, and the huntsman left his hounds to riot in a large semi-wooded valley for a good chunk of the day. Then later on he hunted fields near the meet. Hares were hunted throughout the day but luckily not killed. The Blencathera hunt were sabbed in Cumbria – not used to seeing so many sabs they weren't up for hunting for very long!

Mid Feb we sabbed the Blankney hunt. We split into several groups to tackle this fast hunt which meant they literally couldn't move without bumping into a group of sabs!

We then returned to the Badsworth & Bramham Moor hunt. There were 30 of us out and we worked in several separate groups, tag-teaming the hunt and keeping them moving & sabbed all day! We then sabbed them again on a Thursday and repeatedly took control of and distracted the hounds to ensure a kill free day.

Next we traveled down to the Cotswolds to help the Bristol & South Wales group with a violent hunt. They weren't so violent when the saw 6 times the normal amount of sabs approaching the hunt meet, and they didn't even try to hunt but hid all day instead!!

A mid week sab in Cumbria was next on the agenda. One sab fell on the fells at this hunt and needed a chopper ride to hospital, but despite this we managed to take the full pack of hounds from the huntsman while they were trying to hunt!

Around 60 sabs visited the Rockwood Harriers hunt on March 12th. Unsurprisingly these packed up as soon as the sabs caught up with them. The huntsman also told us that the 2 terrier men who had smashed up one of our vans last season had been fired from the hunt. Sabs then went on to the Badsworth & Bramham Moor hunt, joining one group that was already there, for this hunt's last Saturday meet of the season. They were heard saying they were scared stiff as the masses approached, but they stayed out so as not to look it! They couldn't hunt with so many sabs around them though, and all in all it was a successful day.

We finished the season down in the Cotswolds for another hit on the Cotswold Vale Farmers hunt. This week didn't go as well as the other one as the police got in our way a fair bit. But the Nottingham group had fun taking the full pack of hounds from the huntsman, whilst under a police search! The hunt supporters literally had to carry the hounds away because sabs had such good control of them!!

So the season has finished now. We still haven't put our feet up though as we'll be busy fundraising, recruiting and running regular fitness & self deffence classes throughout the summer, protecting badgers with the South Yorkshire Badger Group from July, sabbing fox cub hunting from August, and we've got our eyes very much on Government plans to cull badgers in England & Wales this year.

We would always like to hear from anyone wanting to join one of our sab groups, help with fundraising, make a donation of money or equipment (eg maps), offer free/cheap vehicle repairs, offer info on bloodsports or just wanting some further information – so PLEASE get in touch!

Hunt Saboteurs Association (for sab groups in other areas)- www.hsa.enviroweb.org/